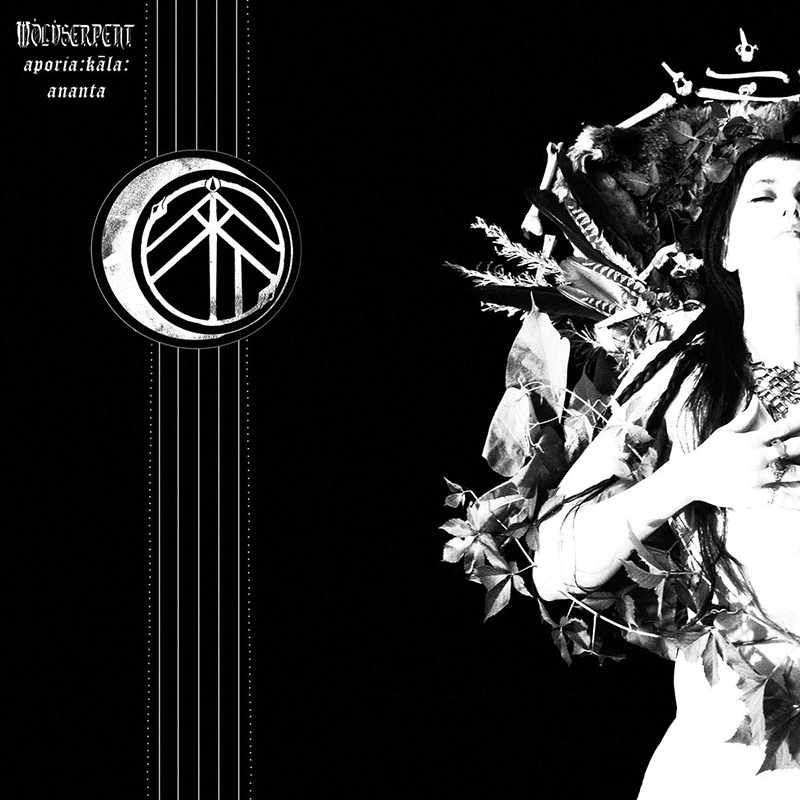 It’s a ballsy move to make a one-track album—ballsy as shit. But sometimes, when a band doubles down on their talent, vision and balls, it can pay off if the artist approaches it thoughtfully. It has to engage the listener enough without pissing them off (see: Edge of Sanity’s Crimson and Crimson II, Sleep’s Jerusalem and Dopesmoker, etc.). With such albums, sometimes I’ll find myself thinking, “Damn … that one part was way good, but I gotta wait through the rest to listen to it,” but there are definitely a few notable purposes on those one-trackers: One of the most important ones is that the artist makes you take it all in one sitting to reflect on the musical and artistic themes, ultimately compelling the willing listener to float through their soundscape.

Having interviewed the band, I sort of knew what to expect when Aporia:Kāla:Ananta imported into my iTunes and I saw the only track (“Aporia:Kāla:Ananta)—a little over 40 minutes in length. Wolvserpent open up Aporia:Kāla:Ananta with dreary violins, which are eventually layered with more violin, on top of which they add an assortment of percussion. Around the late-eight-minute mark, the snare starts keeping time, and the growling vocals begin their invocation-esque recitation. Somehow, the growls are soothing—maybe it’s the soft, atmospheric aura of the rest of the music. It takes about 16 minutes before lowering into the abyss of the duo’s unique style of metal (other than the aura I mentioned earlier), but things start getting doomy, and their purpose and vision all start weaving together, offering a lingering, “Oh, OK, I get it now” moment. The down-tuned droning begins here with eerie keyboards and some off-putting feedback. This goes on for much of the album, and after it finishes, I’m left feeling as if I’d just attended some ancient Dionysian ceremony—something I think I need more of in my life (why can’t my Facebook invites be “Wolvserpent invited you to an event at the ruins of Apollo later this week”?).

Aporia:Kāla:Ananta is nice to put on if you’re crunching dungeons in the Persona 3 or Persona 4 video games and you need a break from Shoji Meguro’s tunes—which I never do—but I thought I’d give this album a shot as I worked one of my full-time jobs located in the Shin Megami Tensei realm. The album’s atmospheric, dark feeling is a great soundtrack for the visuals of blood-spattered corridors and lurking phantoms. The music is also extremely hypnotic, which numbs the overall grinding redundancy of dungeon crawling.

My 2 cents: I think this would appeal to a wider audience more than does a lot of extreme metal. The experience of the song/album is quite nice, actually, and pairs well with a glass of absinthe. It’s similar to their past work in a lot of ways, but unlike a lot of bands, Wolvserpent have matured and honed in on their most significant characteristics, which makes them distinguishable in the first place. This is, without a doubt and by far, their strongest release to date, and it shows the two-piece introspectively delving further into a rabbit hole of ritualistic, doom-laden darkness. They doubled down on their talent, vision and balls, and Aporia:Kāla:Ananta proves they aren’t lacking size in any of those departments. –Alex Coulombe