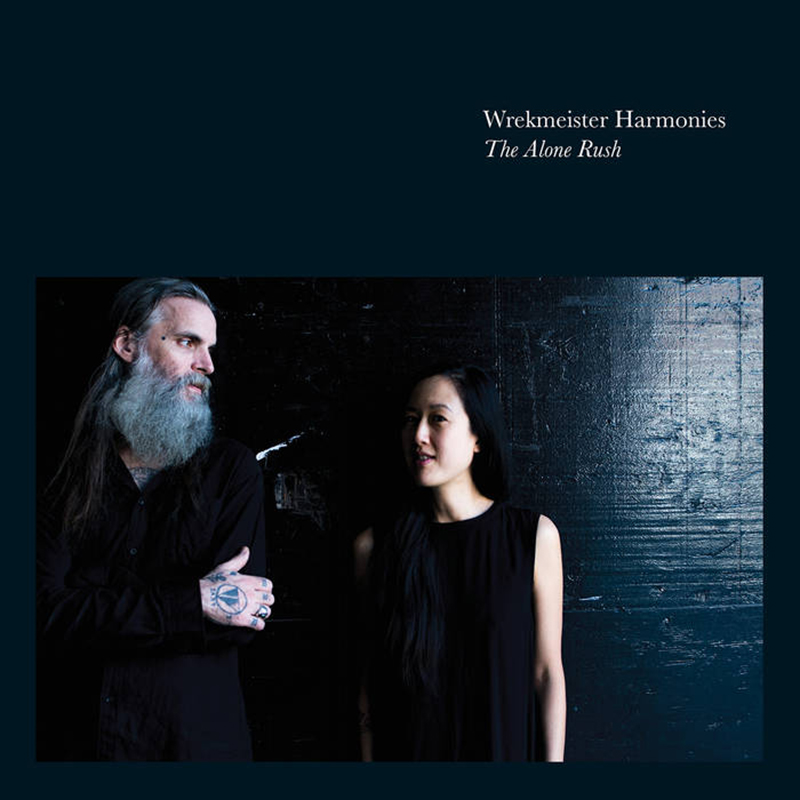 Pared down to JR Robinson and Esther Shaw, Wrekmeister Harmonies left the familiar streets of Chicago for Astoria, Oregon, where they spent two years living in isolation. Reeling from tragedy and loss, the duo, augmented by Swans drummer Thor Harris and producer Martin Bisi, confronted death and loneliness head-on to create The Alone Rush, an atmospheric journey centered on Robinson’s robust baritone voice.

Wrekmeister Harmonies have never been easy to classify. Their penchant for slow-burning songs that build to massive crescendos echoes the structure of many compositions from Scottish act Mogwai. However, you’d never confuse the two, as Wrekmeister Harmonies are traditionally more influenced by distorted metal musings, rather than the chorused buzz of post-punk. I say “traditionally” because The Alone Rush is something of a departure for the band. The album’s heaviest moments, particularly in the cathartic, 14-minute epic, “Forgive Yourself and Let Go” feel more inspired by dissident jazz like late-period John Coltrane than Neurosis or Godflesh. This sonic change of direction might have something to do with Bisi, who has worked with an extremely diverse list of musicians, including the likes of Unsane, White Zombie and Helmet, but more importantly, Bill Laswell, Herbie Hancock and John Zorn.

Yet, these dissident moments are vastly outnumbered by sparse arrangements that feel theatrical in nature. Not cabaret, there’s no cheek here, but something you’d find delivered from a proscenium stage—grandiose and exaggerated, but delivered to an entirely empty house. Robinson’s vocals fill the space as Shaw’s plaintive violin and haunted backing vocals drift ethereally behind like a mist rising across above a forgotten lake. It’s beautiful, until you realize that the lyrics themselves often feel more in tune with Italian horror films than they do with the magical forests of a Studio Ghibli film. It’s Nick Cave‘s Murder Ballads all tangled up in Dante Alighieri’s Divine Comedy. Piss and blood, carnage and suffocation bathed in a vaporous light.

The album opens with “A 300 Year Old Slit Throat,” a song set among “crushed bones on courtyard stones.” A madness, a scar and the lingering taste of metal. Rather than building to a release, a siren’s call of Shaw’s backing vocal promises refuge but offers visions of a calf writhing in the grass as it bleeds out instead.

There is something sinister that exists beneath the seemingly calm surface of these songs. “Descent into Blindness,” the second track, begins in a similar, melancholy place as it builds to something darker, distorted and more menacing as Robinson cries out, “Leave the light on. Please leave the light on, I’m going blind. I’m going blind!” Each song blurs into the next with “Behold! The Final Scream” rising from the snarled end of “Descent into Blindness.” It’s a temporary respite as the beauty is transformed into a Hammer horror film as Christopher Lee stalks his inevitable prey with a sense of charm to hide his true intentions.

With “Covered in Blood from Invisible Wounds,” Robinson paints the canvas with “Arms and legs entwined in trees, the blood, the gore comes raining down upon me.” The aforementioned “Forgive Yourself and Let Go” follows. Its title suggests a moment of self-discovery, but the tension and chaos of the arrangement provides the listener with anything but a comforting epiphany. Even Shaw’s violin has turned from something soothing into something that shrieks.

The album closes with the title track, a shimmering exit from the dark that implies that, at least for the moment, there is a sense of hope as the madness of the forests burns to the ground.

It is a strange thing to stand outside of The Alone Rush. While inside its strange world, the macabre of it all doesn’t feel nearly as dark and damning. There is a lightness that betrays the sinking sense of desperation. Yes, there is a formula at work here, but inside the dream, it feels less structured than it really is. Each of the six tracks suggests a journey and while each could stand alone, the experience is best taken in as a whole. Lost and forced into a descent into madness, The Alone Rush is also a cry of hope, a strong desire to find a way back home. –ryanmichaelpainter 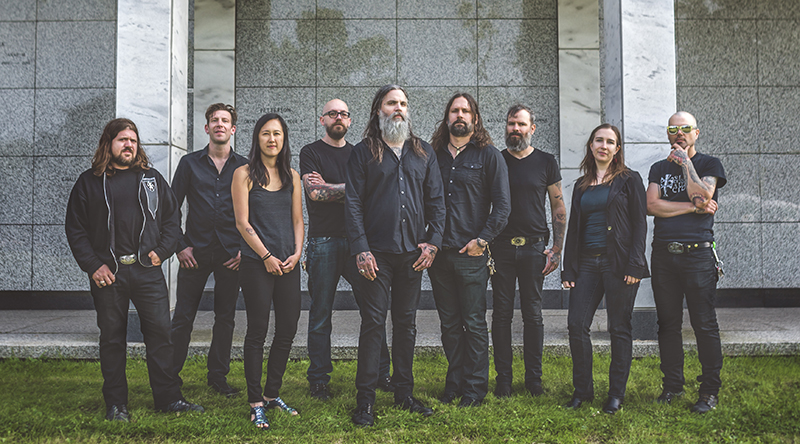 “Night of Your Ascension,” the title track from Wrekmeister Harmonies’ most recent album (released Nov. 13 on Thrill Jockey Records), quietly opens with delicate, reverb-drenched female vocals singing atop droning keys. Over the course of the 32-minute track, Wrekmeister Harmonies gradually take the listener from these gentle and pastoral sounds into a full-on pummeling metal onslaught to close out the track. On Dec. 21, musical mastermind JR Robinson will bring Wrekmeister Harmonies’ expansive musical landscapes to Diabolical Records. SLUG spoke with Robinson about Night of Your Ascension and its grand production.

Prior to forming a band, Robinson was doing abstract installation art, which Wrekmeister Harmonies eventually grew from. “I was doing a film installation at the Museum of Contemporary Art here in Chicago, and I wanted to do a live score for it,” Robinson says. “I wanted this really epic, long, sprawling, meditative piece that would be kind of disruptive at the end with some real heavy and intense music, so I just gathered up some musicians from the very rich talent pool of Chicago to pull that off.” Since that initial installation, Robinson has continued to grow the project and turn it into the touring act that is currently traveling the country. “When I first started the project years ago, I was just doing sound installations at museums all over the world, and then it just grew and involved more and more people until it reached the point I’m at today with Night of Your Ascension.”

The aforementioned build and change of the album’s eponymous first track can be haunting, even more so once we understand the story behind the piece. “[It’s] about a composer from the [Renaissance], Carlo Gesualdo, and the events that transpired during his life,” says Robinson. “At the beginning of the piece, I wanted to explore the idea of his early life when he was married to his wife and very happy and living in a beautiful, creative environment. By the end, I wanted to introduce the idea of fear, suspicion, jealousy and the extreme violence surrounding him murdering his wife and her lover, and all the emotions that are tied in with that. I think that was represented with the heaviness with the more metal aspects at the end.”

In the second part of the album with the track “Run Priest Run,” the music takes on a similarly dark tone. “‘Run Priest Run’ deals with Father John Geoghan,” says Robinson. “He was a priest in Boston where I grew up, who was responsible for abusing 150 children over many years and nearly brought down the Archdiocese of Boston, and abused the trust of a lot of people. Eventually, he was brutally murdered in jail.” These two tracks are fairly typical of Wrekmeister Harmonies’ output, with their long-form droning and unsettling conclusions, but thematically, they move far beyond anything Robinson had done previously. “Conceptually, this [album] is dealing with subject matter that is broader and has many more layers to the story,” he says. “Where in past records it was about a single emotion or was about a couple of emotions embodied in one person, the scope of these two pieces [on Night of Your Ascension] and the unifying theme of religion between the two is just so far beyond anything we’ve done previously.”

The arrangements that Robinson is able to put together with a small army of musicians move far beyond what most bands with solid lineups are able to achieve, or what he could accomplish on his own. “I can’t play the cello, and I can’t play the violin, but I know people who are really good at them,” says Robinson. “So what happens, generally, is I’ll get inspired by something I read about or research and I’ll come up with a sonic narrative for whatever that inspiration is and start recording how I think it should sound. Since I know a lot of people, I’ll be like, ’Oh, this person or that person will be really great for capturing what I want to capture.’”

For Robinson, this broad approach with a fairly rotating cast of musicians allows him to accomplish what he sees as his artistic vision. “If you’re in a band with four people, you’ve got four distinct personalities and four egos and four distinct voices, and everyone wants to have their say. That can be kind of chaotic, [and] what I like about having a large number of musicians instead of a band to work with is it allows me a lot of freedom to do what I want.” Sometimes, however, the freedom that comes with this way of running things can come at a cost: “At the same time, with this last record utilizing 30 people,” he says, “I’m not going to do that again—that was really taxing. It can be complex and complicated getting 30 people to do anything because of people’s schedules and people’s locations, mindsets and attitudes, and a myriad of other things. At the end of this thing, I felt like maybe I was losing my mind, but I overcame that, and I’m really, really happy with how it came out.”

For practical reasons, this extensive lineup doesn’t make it on the road, but Robinson has put together a lineup he is excited about, which includes multi-instrumentalist Esther Shaw and Seattle doom metal band Bell Witch, who are also performing on the tour. You can catch Wrekmeister Harmonies and their expansive and beautiful brand of music at Diabolical Records on Dec. 21.