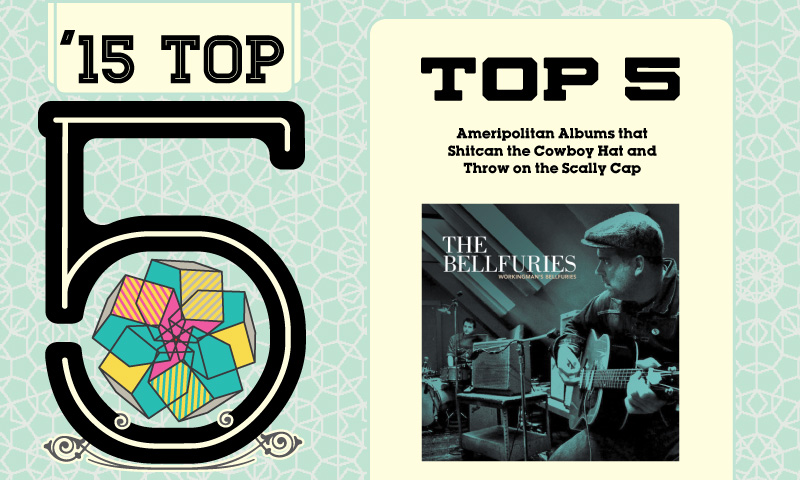 “There’s punk rock in my country, and badonkadonk in my honky tonk!” Don’t fret, fragile cowpoke. If you’re a tried and true country-fried cowpunk, it’s time to shitcan the cowboy hat for some good ’ol Ameripolitan albums. When most people think of a rockabilly band, the tropes of pompadours, flashy suits and songs about hot rods are what spring to mind— but it would be such a disservice to just call this rockabilly. From the onset, when you first hear Joey Simeone’s voice, it’s easy to tell that The Bellfuries weren’t going to settle for anything mediocre on this record. Workingman’s Bellfuries couldn’t be any further away from one-dimensional—there’s a musical sophistication at play here that just blows the doors off of any of those preconceived notions. First, the songwriting is stellar—each song feels personal and simultaneously relatable. The song “Beaumont Blues” tells the story of a young man’s life struggle against the small town he’s doomed to live in; the story ends in murder and is a beautiful slice of Americana. “Just Remembering” is a soulful honkytonk ballad about the feeling of love at first sight and the immediate understanding that you were meant for someone. The band is a sublime group of musicians led by Simeone’s voice and rhythm guitar. Mike Molnar’s lead guitar work conveys so much powerful emotion; Jeff Seaver on upright and electric bass and Chris Sensat on drums make up a terrific rhythm section that creates the base for all these wonderful melodies to be built on. The Bellfuries have been through many changes over the years, starting out as a traditional rockabilly/hillbilly drummer-less three piece, then somehow morphing into a pop, soul and rock n’ roll outfit with their second record, Palmyra. This version—Bellfuries 3.0, if you will—seems to evolve into a mix of the most brilliant parts of those previous incarnations. The Bellfuries have taken a major leap forward for themselves and have dragged roots and rockin’ music along with them and proven that retro music can be brought to life in an interesting, electrifying way. Following up to a classic is always a challenge, but when JD McPherson and his band went about creating their second record, all they wanted to do is make one hell of a rock n’ roll record. With producer Mark Neill, they managed to put together a record that was both fit to follow Sign & Signifiers and also displayed their creativity. McPherson’s vocal performance ranges from explosive to subtle when needed and is constantly on point. The rest of the band is just as versatile and are able to jump from deep, soulful tunes to stomping rocks and even bopping jump blues. Pokey LaFarge
Something in the Water

Pokey LaFarge might be our last chance at capturing what is truly great about American music. Blues, jazz and Western swing are this artist’s brush strokes that he so easily employs. At first encounter with Pokey, it might seem like he’s playing some sort of out-of-time character, but once the music works its way under the skin, it’s apparent that he’s as sincere as a death-bed confession. “Goodbye, Barcelona” is this Spanish love song that’s out of the norm for LaFarge, but it’s like a Hemingway short story in song form. These songs are wonderfully written, and producer Jimmy Sutton brought every bit of his “A” game. The Shack Shakers always manage to amaze and astound with their recorded offerings. They’re always exciting, never dull, and you know they’re not like anything else out there. Southern Surreal is entertaining, but there is a fantastic one-two punch in the middle of this record with “The One That Got Away,” and “Young Heart, Old Soul”—the first is a sweet romantic rocker with just enough bite to it to make a Shack Shaker tune, and right after that, this swampy rollicking stomper jumps right out of the speakers at you. This band has always found a way to revive elements of music of the past by lighting a fire underneath them. I might sound crazy, but the most traditional hillbilly classic country music artist is from the UK. I could spin a Charlie Thompson tune for anyone that hasn’t heard him before, and they’d assume he must be some obscure, late ’40s Grande Ole Opry performer they’ve never heard of. He has the high-pitched wail of a Hank Sr. while not being an imitator. On this record, he’s surrounded by some of the best musicians, such as guitar legend and builder TK Smith and steel guitar master Jeremy Wakefield. It’d be easy to shrug off Thompson as a throwback artist, but the fact is that he does this so well he proves that this is some of the best music ever.