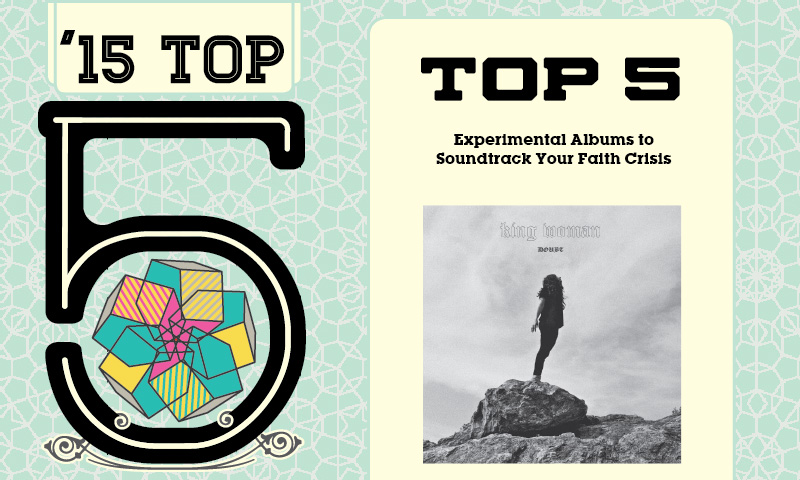 Have you had an existential crisis dealing with the faith that your parents raised you on? The experimental albums in this list can help you process the trauma. So, it turns out that your ex is a close-minded, controlling DUDE living in the halcyon days of an invented 1950s. We’ve been there. Take some time. Mourn. Cauterize the wound and move on. Easy, right? Not quite, as King Woman so eloquently document in their crushing breakup album, Doubt. It is a bitter, soul-searching, caustic and ultimately cathartic debut that takes us through all of the anger, sadness and empty self-liberation of a breakup in 20 minutes of drone-metal riffs, post-rock epicness and funeral-slow percussion. The breakup that vocalist Kristina Esfandiari (formerly of Whirr … like waaay formerly, so don’t even trip) narrates is not with a romantic partner but with a worldview of the dogmatic Christianity she was raised with. Doubt is Esfandiari processing the strange and oppressive events that molded the faith of her youth. Esfandiari’s impassioned croon channels smoky hints of PJ Harvey that float over feedback-drenched landscapes, slow-motion thrash riffs and percussion tuned to the sick thud of a punch thrown against a brick wall. Breakups aren’t easy—neither are faith transitions. Doubt doesn’t make it sound easy. It wallows in fuzz and distortion and voices regret in unease instead of clear-eyed intent, but it ultimately arrives on the other side, a little bit closer to self-actualization and a lot less burdened. Doubt is a record that flings listeners, against their will, to the bottom of a deep, deep well, but it also lowers the rope to pull us back out. The bright, blinking noonday exit from any breakup— both literal and metaphorical—is one of the most triumphant experiences of your life. Doubt is the soundtrack to both. If there was one album that put a loss of faith in the universal yet agonizingly personal realm of the loss of a loved one, it was Asa Horvitz’s chamber-pop ode to the death of his best friend at the age of 23. It’s full of hyper-contextual, young-dude-in-2015 recollections of moving to Brooklyn, getting into bike accidents and having real friends held in tension. Vales offers call-and-response contrast to crushing existential questions about the fragility and randomness of existence with knotty, fully fleshed orchestral compositions held under the sway of Horvitz’s beautifully unpolished and striving vocals. “Fuck me, I’m falling apart” could be Stevens’ most satisfying lines he has ever uttered as measured both by delivery (recorded onto an iPhone in an Oregon hotel room) and in context (a hymn of wavering faith). It was also my personal mantra for this year. What makes Carrie & Lowell—a record by admittedly devout Christian—such an amazing album to soundtrack your faith crisis is that it dredges so much ambiguity and ambivalence in the face of personal and existential loss. Where does one go from here? Portland, Oregon minimalist composer Bryan Ruhe creates cavernous spaces between his carefully selected piano notes and ebullient drones to hurl a life’s worth of insecurities into. Patriarchs is a stately album centered around simple and stark piano lines with electroacoustic flourishes bolstered by choral pieces and a notable lyrical meditation on venerated patriarchs that, in reality, are “rotten to the core/but somehow still the chosen ones.” Killing our idols never seemed so important as it did in 2015. Chantepleure is a French word meaning to sing and to cry simultaneously. Although it’s totally instrumental with tonal passages and movements unfolding in the time it takes for a candle to fully dissipate, Cobb creates gorgeous synth and guitar sounds somewhere in that fuzzy line of emotional demarcation of a beautiful song gurgling up through sobbing tears. So, with post-crisis eyes looking toward the new year, we mourn the past, we move on with that faithful dog of grief somewhere at our heels … yet, with a bit more spring in our step. “How can I keep from singing?”