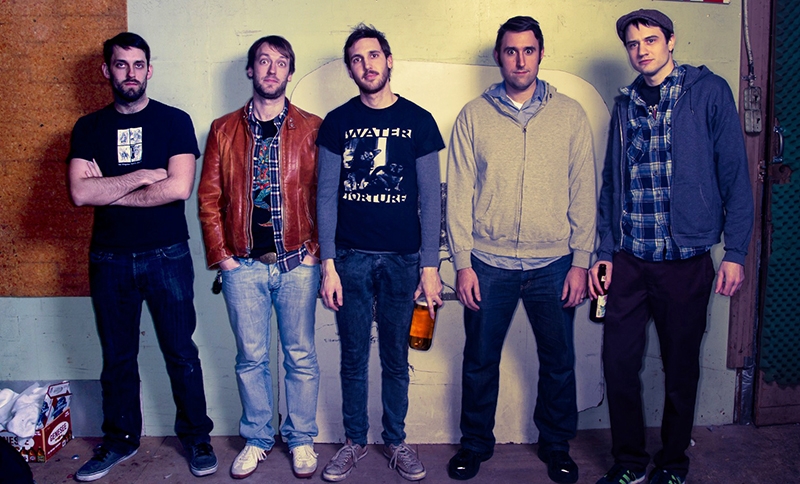 Pist, agitated and frothing at the mouth, We’re Fucked erupts with jovial violence meant as a blueprint for shout-alongs at live punk shows. Reviewers—and the band itself—have dichotomized Galactic Cannibal’s sound as being “pop punk + hardcore,” which skirts that this record is a short, sharp shock of street punk with its catchy gang vocals and major-key progressions coupled with vocalist Peter J Woods’ snarling assault. We’re Fucked, however, transcends these sonic genre conventions with contemporary and relevant album artwork, introspective lyrics and zero mohawks, all while pipe-bombing the State. “The Breath Before” exemplifies this with nihilistic declarations of “Fuck your rules and fuck your codes,” following in the next stanza with “Every choice and every breath/Effects [sic] the man that stands before,” which, though it’s not exactly Chaucer, weds the visceral, Neanderthal nature of their music to thoughtful, conceptual undertones. Woods never wavers from his John Brannon–meets-Oi! bark from opener “Hate Everything More” and “Air Runs Dry,” where he gnashes, “I’ll face the wall/And bash my face against/Slammed up against/Scream til my teeth break off.” Woods mutilates his body in his lyrics, unifying this conceit with his throat-ruining screaming. His black-hole ferocity not only reinvents the trope of violence in this genre, but totally purges frustration and sarcastically abreacts to internalized attacks in a fun way, such as with closer “Take it from Me, Everything You’ve Ever done is Fucked up & Horrible,” which starts with “You’re too dumb/Say it again and again and again.” Psychoanalysis aside, We’re Fucked is truly a party and half, and the standout title track creates a pogo-appropriate atmosphere with its upbeat rhythm and playful, single-note guitar solo. –Alexander Ortega