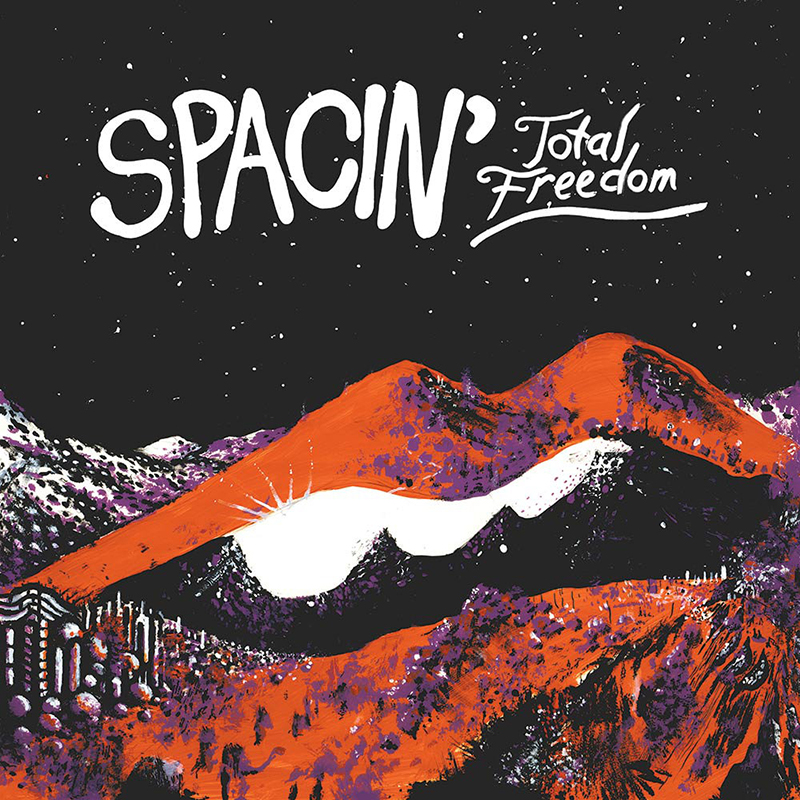 After the release of Spacin’s 2012 album Deep Thuds, the Philadelphia-based, psychedelic jam band Spacin’ received a cease and desist letter from The Rolling Stones for their cover art’s use and alteration of a particular mouth and tongue symbol. For this year’s release, Spacin’ did it again and I couldn’t be prouder. Total Freedom, which can be read humorously when considering the Stones’ attitude towards other people’s art, is all about this irreverent reshaping of the past—a sound like the recollection of an increasingly uncertain memory.

Opening up with the track “Over Uneasy,” Spacin’ immediately establish themselves as sonic impressionists. The band meshes familiar tones and riffs of late-‘60s artists like The Velvet Underground, The Kinks, T. Rex, etc., and excels in reproducing a spirit of old-school tenacity. The first two bright strums of the album create a prediction of clarity that is soon to be proven false as Spacin’s blurry playing style crashes over it like a wave. The rhythm guitars come in sounding akin to “Suffragette City” being played loudly in another room and the vocals are barely discernable in their strained, fuzzy timbre. The chaotic sound-play weaving in and out of the groove makes it difficult for your ears to focus on any one thing, and so Spacin’ eventually induce a cerebral effect as your mind lets go of expectation and lets the song take it along to wander. In short, they picked a great band name.

Fittingly, the album as a whole plays out like a journey across emotional soundscapes. Tracks such as the mantra-like “Stopping Man” and the 10-minute long “U.S. Ruse” are explorative, untethered and have probably never been played the same way twice. Thus, it seems that each time Spacin’ play a song, each rendition is a new attempt to resolve or expand the song’s particular idea or feeling, and though I’ve never seen these guys in person, I imagine that the recordings are attempting to capture this undoubtedly amorphous and improvisational live performance style. For what it’s worth, I think it succeeds. Even when Spacin’ totally bathe us in noise (“Kensington Real”), they wrestle its meaningless into an eventual piece (“Human Condition”).

Artistic achievements aside, however, Spacin’ still have their good moments of pop sensibility and sound uncannily familiar. The summery track “Titchy” sings a swaying hook over the warm chugging strums of the backing guitars, and the darker “Batfolk” acts the equally catchy blues inverse.  And though these songs are fun to listen to, and actually work to anchor the album down somewhat, Spacin’ are at their best when getting deeply entrenched in their jams. “U.S. Ruse” is an especially perfect example of this reproduction of cosmic movement. As a listener, I couldn’t help but get lost in it with them as I zoned out to whatever mental animations the songs were evoking.

As for the entire psych rock genre, we’ve certainly seen an explosion in recent years as bands from all over the world have attempted to carve out their own spot. Some are great, and some are entirely forgettable. If you’ve been on the lookout for something new within the form, I recommend picking this up. It’s not surfy or overly stylistic. Spacin’ are just a good psychedelic/art rock band playing some groovy shit out of their garage. What more could you ask for?