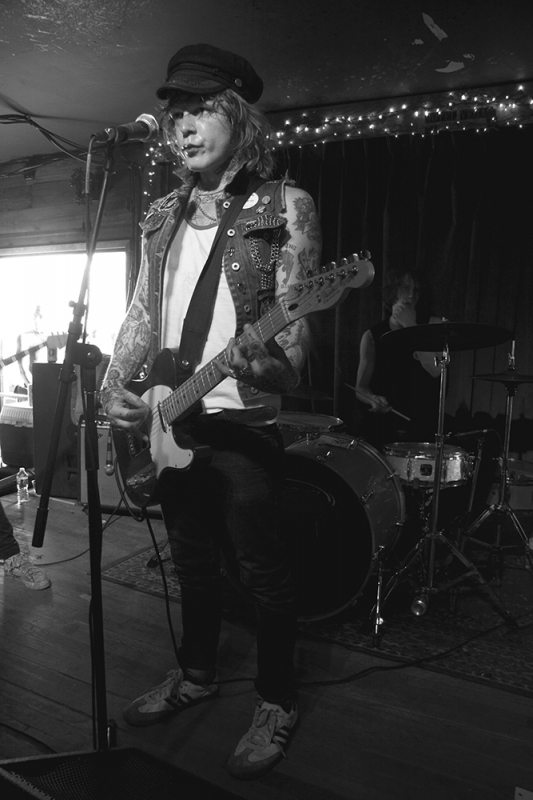 I was sitting on a church pew swooning in UK electronica music by Matthew Barnes (aka Forest Sword), when I glanced at my phone. I was going to be late! Grabbing my bag, I ran out of Austin’s Central Presbyterian Church on race to the Red 7 Patio, where Perfect Pussy was about to play. I had a feeling their set was going to be loud, fast and really fucking short—the kind of punk show you could miss if you were 10 minutes late. I pounded pavement past hundreds of drunk festivalgoers until I made it to the venue. Luckily, there was no line at the door and I strategically worked my way up to the front. Perfect Pussy was already wailing through their second song, playing their unique brand of abrasive, “fuck you” punk. Meredith Graves screeched with her eyes closed, folding her body in half at the waist as she belted out indecipherable vocals. By the third song, Graves had removed her long-sleeved sweater revealing several upper body tattoos, some resembling those made by a DIY tattoo gun. Graves was vicious on the mic, screaming like she was being carried away by a pack of wolves. She held her microphone a good three to four inches from her mouth. Not all of Graves’ passionate yelps made it through the PA. Those of us who were on the front row could hear these unamplified voice parts, a nod to hardcore vocal stylings of the ’80s. Perfect Pussy pushed on through the fourth and final song, blasting the crowd with noise. I pogo-ed with the crowd, lifted my head, and it was over. Without uttering a word, Graves threw the microphone on the floor of the stage, grabbed her bag and walked off. The audience seemed stunned—burned by the fierce energy they were just left with. I stood in front of the stage, taking in the experience when a woman in her mid-50s tapped me on my shoulder. “Who in God’s name was that?” –Angela H. Brown

Maybe it’s the theatre stage of the nondescript venue, The Hideout, and its dark, bohemian atmosphere, but Protomartyr deliver something transcendent. Frontman vocalist Joe Casey looks like a dad in his pleated pants and tucked-in, buttoned-up shirt with a white undershirt. His vocals are shouts, which he punctuates with correlating scowls, and the words he spits paint pictures of dark street corners, perhaps of Detroit, their hometown (where, Casey noted, they don’t have roundabouts). Guitarist Greg Ahee looks as though he could be Casey’s son, and bassist Scott Davidson and drummer Scott Leonard look like potential neighborhood kids onstage in a showing that comes across more like a play than a rock set. Casey loosens to a deep croon from his bitter half-snarls and sings in a baritone atop Ahee’s angular, wistful guitar work. The singer scrunches up his face expressively, and it’s in his performance that Protomartyr’s set becomes something like a rock-musicalized poetry reading without the effects of slam poetry, yet also without the graceless flurry of mosh pit dancers. Though their set is enigmatic, there’s something charmingly artless about the way in which Protomartyr deliver their music; they lie somewhere between the post-punk of Gang of Four’s more severe moments and the less vitriolic moments of Damaged by Black Flag. Their songs each stand on their own, but it seems that (no matter in which order they’re placed in a set, seemingly) their songs culminate in a synergistic wallop, which invokes grit and greyness and the warehouses in their blighted Michigan home city. As they sidled into what might have been their last song of the evening, something in Ahee’s guitar/pedal/amp setup shorted out, and Casey smiled to let the crowd know that they were done. With a wave of his hand, the act was over. –Alexander Ortega