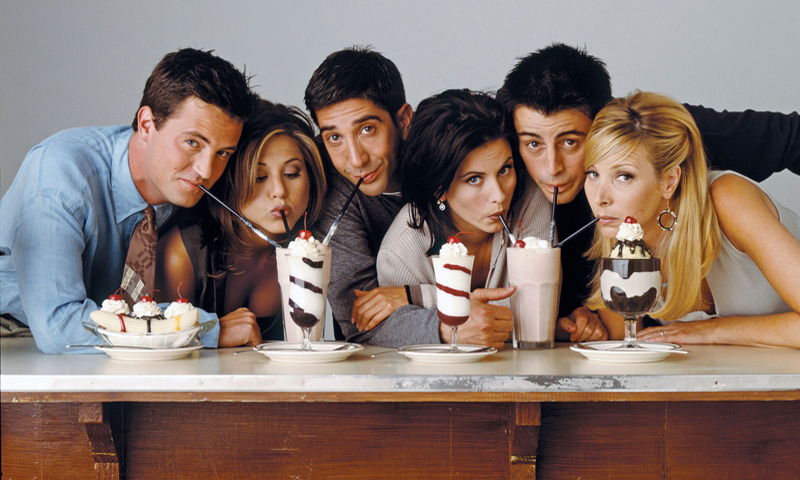 Where have all the Friends stars gone?

There will never be another Friends. It’s not just in the sense that the 1994–2004 series was a one-of-a-kind comedy that defined a generation, but also in that there will literally never be another—as in, no money-grabbing, nostalgia-drunk reboot. The show’s stars could not be any more disinterested.

That’s commendable, considering the megabucks being thrown around to dig lesser ’90s series out of the grave. The recent Will & Grace revival isn’t all that loathsome, but who knows how the upcoming recycled takes of Charmed, Roswell and Party of Five are going to fare? And then there’s Roseanne … yeah, fuck Roseanne.

Back to Friends: All six stars—Jennifer Aniston, Matthew Perry, Lisa Kudrow, Matt LeBlanc, Courteney Cox and David Schwimmer—have collectively and individually said, “No way, no how, no thanks” to a reunion. Millions of Netflix viewers are apparently just fine with the 10 seasons already available; Friends is one of the streamer’s top draws, especially among (¡¡¡Marketing Buzzword Alert!!!) #millennials.

But where to go once you’ve binge-watched all 236 Friends episodes? Here are 14(-ish) shows starring The Artists Formerly Known as Monica, Joey, Phoebe, Chandler, Ross and Rachel outside of Central Perk (sorry, no Gunther):

The most successful—or at least longest-lived—post-Friends solo project was also the most Friends-like. Courteney Cox’s Cougar Town evolved from a sitcom about a man-hungry 40-something divorcee into a genuinely funny ensemble comedy about—spoiler—six friends. There’s no laugh track, favoring the rapid-fire delivery of producer Bill Lawrence’s Scrubs, and each of Cougar Town’s 102 episodes is named after a Tom Petty song.

Cox’s first series after the end of Friends didn’t fare as well. In the 2007-08 FX drama Dirt, she starred as the editor-in-chief of a muckraking celebrity-gossip magazine who wrecks lives for print and profit. (Remember the days when magazines could profit from print? Good times.) Dirt showed an unexpectedly dark and ruthless side of Cox, but the series eventually became too twisted even for FX, which killed it after 20 episodes.

Misfits of Science (Season 1 on DailyMotion)

Before Friends, Cox costarred in another NBC series, the 1985–86 sci-fi oddity Misfits of Science. Unfortunately, this piece of retro-kitsch is ridiculously unavailable, existing only on import DVDs and random internet sites. Kind of a stoopid dollar-store X-Men, Misfits of Science centered on a gang of super-powered teens; only Cox stood out (though costar Mark Thomas Miller did go on to lead the cinematic triumph Ski School).

Nearly as hard to find and only half as funny was Matt LeBlanc’s Joey, the only “official” Friends spinoff. The 2004–06 sitcom should have been a slam dunk right after Friends, with an impressive cast that included Drea de Matteo, Andrea Anders and Jennifer Coolidge … but, god, did it suck with the force of a thousand blackholes. Apparently, the plan was to move “actor Joey” to Hollywood to fail miserably. Mission meta-accomplished.

Speaking of meta, here’s Matt LeBlanc as Matt LeBlanc! After disappearing upon the demise of Joey, LeBlanc resurfaced five years later in a Curb Your Enthusiasm–esque Showtime series as an exaggerated version of himself—with brutally hilarious results. R-rated inside jokes about Friends and Joey fly furiously, as do jabs at Hollywood vanity and toxicity, with “Matt LeBlanc” leading the way as Dickhead Supreme. The best Friends follow-up.

Man With a Plan (Seasons 1–2 on CBS All Access)

And now the worst. Before Episodes had even finished its run on Showtime, LeBlanc had lined up a new gig straight out of the CBS sitcom-clone factory: Man With a Plan, the kind of hackneyed network shit that his fictional self would have mocked mercilessly. He’s a stay-at-home dad! His kids are assholes! His wife thinks he’s a dope! How is this different from Kevin Can Wait? The wife isn’t dead … yet.

In 2005, Lisa Kudrow co-created and co-wrote The Comeback, wherein she starred as actress Valerie Cherish, a D-lister who had a hit sitcom in the ’90s (meta!). The Comeback is “raw footage” of a reality show called The Comeback, chronicling Valerie’s Hollywood comeback on a new sitcom (kinda meta!). Kudrow’s ballsy, uninhibited performance is as uncomfortably funny as anything Ricky Gervais has ever pulled off.

Speaking of meta: Kudrow created Web Therapy in 2008 as an online series, but it eventually moved to Showtime, and now it can barely be found streaming anywhere. Here, she’s Dr. Fiona Wallice, a self-proclaimed “groundbreaking” therapist who conducts three-minute sessions via Skype with a dizzying array of celebrity patients (including several Friends). Silly on the surface, Web Therapy is a darker comedy than it first appears to be.

Feed the Beast (Season 1 on Hulu)

Give credit to AMC: The cable network sinks serious money into serious failures (see: most every show that isn’t The Walking Dead). Feed the Beast, a gritty 2016 drama starring David Schwimmer as a sad-sack sommelier (that’s a wine expert, PBR-heads), was like Breaking Bad meets Kitchen Nightmares: Two buds open a fine-dining restaurant in the Bronx, only to be seared and deconstructed by the local mob. Ten episodes, done.

Earlier in 2016, however, Schwimmer nailed it as defense attorney Robert Kardashian in Ryan Murphy’s American Crime Story: The People v. O.J. Simpson, a sprawling, ambitious, entertaining mess dramatizing the Juice’s 1995 murder trial. Stars John Travolta and Cuba Gooding Jr. received most of the attention, but Schwimmer was fantastic (and nominated for an Emmy) in a freak show of a series.

Studio 60 on the Sunset Strip (Season 1 on various sites)

Matthew Perry was poised to become the biggest post-Friends breakout TV star, and in 2006, he wound up on NBC’s hella-hyped Aaron Sorkin dramedy, Studio 60 on the Sunset Strip, which went … nowhere. Set behind the scenes at a Saturday Night Live–style sketch show, Studio 60’s initial episodes were sharp and funny, but then dragged and died on preachy politics (Sorkin later got the mix right with HBO’s The Newsroom).

Perry’s losing streak just kept streaking with 2011’s Mr. Sunshine, a half-hour comedy that found him playing the unlucky-in-love manager of a San Diego sports arena. Despite a solid cast that included Allison Janney, Lizzy Caplan, Andrea Anders (who also did time on Joey) and Portia Doubleday (later of Mr. Robot), Mr. Sunshine grounded out after one meh season. Perry had better luck playing himself on Childrens Hospital that year.

Go On (Season 1 on various sites)

As another one-season wonder, the funniest thing about Perry’s Go On was the hashtag that NBC used to promote it on Twitter: #goon. How could anyone not find laughs in the story of a recently widowed sports-talk radio host (Perry) forced to attend a grief-therapy support group? Comedy gold! America didn’t agree, sending Go On to the sitcom graveyard after 22 episodes. A darker version probably would have thrived on HBO, but whatever.

And Then There’s … Jennifer Aniston (Jen streaming on JustWatch)

Aside from a few brief post-Friends cameos, the former Rachel has stayed the hell away from TV—after witnessing Chandler’s trajectory, who can blame her? Instead, Jennifer Aniston has starred in 50-odd movies, not including her first (and finest), 1993’s Leprechaun. Other great roles in the Aniston canon include Office Space, Rock Star, The Good Girl, Derailed, Management, The Switch and Horrible Bosses; avoid Marley & Me and Mother’s Day like Rachel’s Thanksgiving Trifle.