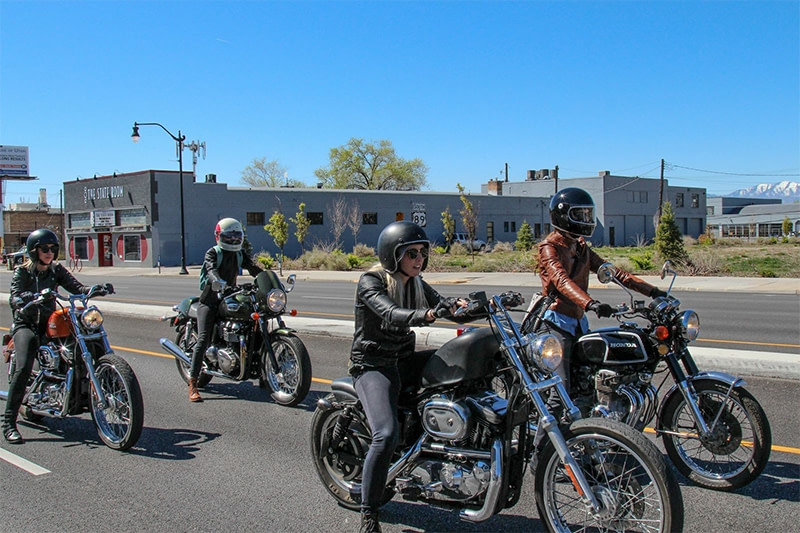 The Litas: The Other Sunday Sisterhood

When I hop on my motorcycle, a Hunter S. Thompson quote always goes through my head: “Faster, faster, until the thrill of speed overcomes the fear of death.” It elicits the mindfulness and focus that forces you to clear your head and use all your senses in order to pick up on the things you don’t notice in your car—the smell of summer BBQs, flowers in spring, getting a fucking wasp stuck up your sleeve while going 45 mph. It’s a form of meditation for me, where the absence of intrusive thoughts allows for renewal, cleansing and, as Jessica Haggett, co-founder of Salt Lake’s premier women’s motorcycle club The Litas, declares, the love of going “really fucking fast.” I met up with Haggett and a few of the Litas to find out how this group was born.

The Litas is the brainchild of Haggett and Paige Macy, thought up one inebriated night outside of Dick N’ Dixie’s. Loosely borrowing the name from Macy’s former tag name for her artwork, the idea finally came into fruition this past fall after four years on the back burner. The group is composed of 22 of Salt Lake’s most fearless female riders, many of them former strangers who, through the shared love of riding, have become good friends. They hope to encourage the fairer sex to be less fair and more badass by taking the reins—make that handlebars—and, as Haggett admits, to “weaving in and out of traffic and … going 120 mph.” As a responsible rider, myself, I cannot possibly advocate such action … but it is rather fun.

In collaboration with Salt City Builds, the ladies had their first group ride and BBQ, appropriately named Sunday Mass, on March 15, which brought out an unbelievable 65 riders, both male and female, from all riding styles and levels of experience. “I have a lot of friends who ride, but I didn’t even know anyone who showed up,” Haggett says of the awesome turnout for their first big ride of the year, resulting in a five-hour long BBQ afterward. “There were older dudes on sick, chopped-up Harleys, younger guys on their Enduros.” Through the power of social media, the word about the ride has spread like wildfire, and the ladies predict an even bigger turnout on rides to come.

Riders of all styles and experience are encouraged to come, but one should be cognizant of the skill sets of other riders. Haggett pointed out that though the turnout was great, it was kind of scary riding with that many people because some ignored the rules. “You have to be really aware of people’s experience level,” Haggett says of riding in a large group. “It’s scary, and someone can cause an accident, especially riding with that many people.” When riding in a group, sticking to a pre-planned formation or line is really important, not “surfing your damn bike,” as Haggett says.

Felicia Baca and Haggett highly advocate taking the MSF Basic Rider Course where you can learn the mechanics of operating a motorcycle and evasive maneuvers before you hit the streets and have to deal with soccer moms and people taking selfies while they drive. Most importantly, always ride within your limits. You have nothing to prove to anyone, and no one cares anyway—they’re just there to have a good time.

When I rolled up on SLUG headquarters to meet up with The Litas, I was greeted by Baca, bassist for local group Color Animal, and her beautifully restored ’73 Honda CB 350 Four. Soon, the deafening sound of Haggett and Macy’s Harley Evo Sportsters descended from both directions. We made our way through Downtown, up to the Capitol and later stopped at Beer Bar for lunch. We found it interesting, as a group of ladies on four different styles of bikes, how many head-turns we got—old bikers gave us thumbs ups, people even took photos, and some ass hats made fun of us from their weak-ass Corolla. Psh. Seeing one female rider is a common thing, but four girls riding in tight formation must be a novelty, or maybe it’s just intimidating. As with other phallic pastimes, women can feel discouraged to pursue something like motorcycling. “It’s a very sexist community,” says Baca. Whether it’s by concerned family and friends or some other clown-haired fool who makes fun of your 250cc starter bike, you have to move on and do what nourishes your spirit.

All three lovely Litas I rode with on that perfect Sunday afternoon agreed that though the fear of what could happen on the road nearly stops you from riding some days, or, as Haggett says, nudges you into “selling [your] bike,” the joy of letting yourself go and trusting your life in your own hands completely negates those fears. The damn-near only downside to riding— ”Winter,” Baca says. “We hate Winter.”

After having ridden with the Litas, I am refreshed and motivated by a group of fearless ladies who have had the same challenges and fears as me. I want to do what I can to spread the gospel of the bike to other ladies. Visit thelitas.co for more info on ladies-only events as well as collaborative events with Salt City Builds—and hey, they have a website, too! Check out saltcitybuilds.com for info on rides and bitchin’ custom-bike builds. If you’re a prospective rider or a rider who wants more practice, visit utahridered.com for info on the different courses taught depending on your level of skill.