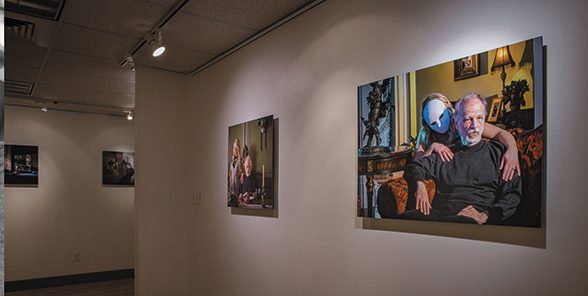 As you head down the stairs at Bountiful Davis Art Center, you see the first piece of Echoes of a Morning Star, Adam Watkins’ collection of photographic tableaus. From his BeneathME series, the piece is titled The Mirror. An older woman, a small, bloody cut above her brow, stares imposingly from her lawn. The orange light of the porch is heightened, exposed against the blue light of night and pooling in the yard and across the autumn leaves. It has a hyper-realistic feeling, as though the piece could be an ad for a show on the CW, with all the mood and hyper-intention of a modern prestige drama. It’s a gripping first impression that flexes Watkins’ meticulous attention to composition.

The tableaus hit in waves. Often, the lighting is the most striking element. With some exceptions, Watkins is presenting pieces that play with light and dark in high exposure. Every light source is intensified with a high range of light and color—darks are visible and vibrant but can exist alongside the light, leading to a very balanced feeling for much of the color composition. The warmth of light at night is soft and melds into scenes like the end of a cigarette, a cherried hue. Breaking, similar to The Mirror, takes the scene of a man kneeling over a tote in his backyard at night and explodes the details out beyond what the naked eye could see: The shadows of night are bluer, contrasting the warmth of the light inside. And anchoring the composition is not just the man but his gaze, looking as if toward something.

The faces of Watkins’ subjects are often the second wave to hit me while absorbing his work. There is an ominous sense of detachment in most photos. Some people make eye contact with the camera while others look off in the distance or at each other, and the lighting of their bodies can sometimes make them feel out of place or superimposed. “I’ve become enamored [of] the subject’s ability to disassociate,” says Watkins. “I don’t see these as characters that are looking at me, [the photographer,] but perhaps looking to some omniscient viewer—a quiet plea to God.”

I found myself fixated on the gaze of most subjects, as they’re the element that can single-handedly direct the mood and narrative. Chicken Shit is a harrowing example of this: A woman stares at a box of spilt matches on her kitchen floor, a knife in her hand, her microwave filled with household cleaners, the beginning of a suicide note on the fridge, the door next to her slightly ajar, light gently pouring in. Even though her gaze is not toward us or with us, the heavy stare downward forces the empathy of the moment.

Sometimes, the gaze will reinforce the surreal rather than the hyperreal. In one of the most beautiful pieces, “Patience,” the subject’s gaze intensifies the narrative. A woman wearing a blue dress and yellow gloves in a diner stares at a burger as she prepares to eat it. It’s a close exterior shot, and she is taking off long, yellow dress gloves, which accentuate the yellow surface of the building, the sunset its windows reflect, even the lights inside. It’s an example of Watkins at his best, where all the elements are working in tandem for a pleasing and curious narrative, the woman patiently stripping her expensive wear in order to eat what looks like the nastiest burger. Her gaze is simple but knowing, a tacit acknowledgement of the absurd.

The pieces are all taken from individual series of tableaus and constitute a large part of Watkins’ work over the last few years. It is a time-consuming process to compose even the relatively uncomplicated works, partly because the location of each tableau is important and specific.

“I keep haunting the same places,” says Watkins. “I’ll be at a certain place, something will strike me as being unique, and I’ll return to that place over and over again.” These locations can seem completely benign or completely integral. The Two Of Us shows a person kneeling in front of a small set of stairs leading out of frame. The street is somewhat nondescript with only a few standout details beyond the lighting and color. On the other hand, in “Filling Spaces,” a lone person kneels on a theatre stage. A single stage light illuminates their presence as they stare at empty rows of seats. Even though the detail of the setting is inherently more playful, it’s the combination of lighting, the framing and the subject’s gaze that makes both images memorable.

The best piece, A Subtile Reformation: #1, shows a man in a jumpsuit standing just before the doorway to his home. He is caked with dirt, a shovel next to him. He stands not on the lawn and not inside, instead existing on the in-between space, staring across the boundary. “There’s a hesitation to move into a clean space,” says Watkins. “Something has to be accepted before any movement can take place.”

Moving between tableaus, each piece lays out a humble offering to linger. The obsessive detail is so intense that you may not feel all the layers of the composition at once, and that is OK, too. The subjects themselves seem rapt in their own tableau, perhaps as rapt as we are in ours.