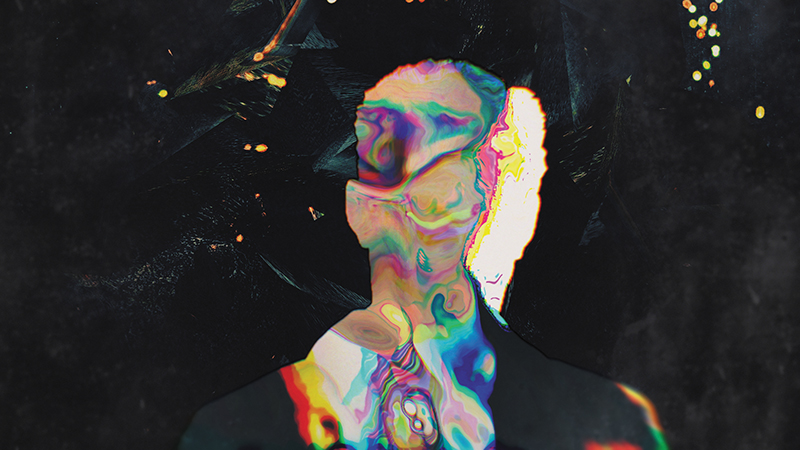 Since Sept. 15, the Nox Contemporary Art Center has been home to two wildly different installations: Amy Jorgensen’s A Labor of Love and Justin Watson’s |human|, both on show through Nov. 10. Each of these works explore reconciliation, and although almost nothing about either piece resembles the other, seeing them in dialogue provides an opportunity to form connections within the world of contemporary art.

In A Labor of Love, Jorgensen continues her exploration of the apple as a familiar symbol. The piece comprises three main elements.“There are dinner napkins, cocktail napkins and then the Body Archive images,” says Jorgensen. Reminiscent of Michelangelo‘s The Last Supper and Judy Chicago’s Dinner Party, Jorgensen smashes 13 apples on each table setting, leaving messy, urine-like residue on the dinner napkins while the cocktail napkins are stained with wine and blood.

Down to the title, Jorgensen is specific with meaning. “I think ‘a labor of love’ is often used in the context of the domestic space and the context of women,” she says. Her work often engages documentation through a feminist lens, and A Labor comes off the heels of her New York exhibition, Something Old, Something New, Something Borrowed, Something Blue, a collection of 18 images on handkerchiefs, each of militant U.K. suffragettes from the 20th century. This feminist air carries over into the violent decadence A Labor explores.

Apples are a common thread in Jorgensen’s work. “All of my work is heavily invested in symbols and language,” she says. “When you think of the apple, the phrases and things that you think of—the Garden of Eden, of Eve, ‘an apple a day keeps the doctor away’ … I’ve actually had students bring me apples on the first day of class—it’s this wholesome representation of all-Americanness, but it’s also a representation of sexuality and sensuality for women. It represents the fall of women. I’m interested in exploring [these connotations]—and toppling them as well.”

Alongside are new additions to Jorgensen’s ongoing photography project, Body Archive. The new additions are images produced by literally exposing her body to light-sensitive emulsion while performing A Labor. The emulsion rests between her skin and clothing, documenting the body during the act. Some images feel more animalistic, some feel splotchy and dirty, while others feel calm and ethereal, beautiful to the right eye. This entry into Body Archive plays perfectly into Jorgensen’s continuing exploration of how one documents reality. Her inability to control photography’s technical aspects is key: ISO, aperture, shutter speeds—all are shed to give the body a voice.

Where Jorgensen is specific and focused in her creative intention, Justin Watson is comfortable being more nebulous. His video installation |human| sets two virtual entities projected against opposite walls in a scripted dialogue: one, a wonderwall-singing pseudo-intellectual, and the other, his critic, skeptical of the weighty, philosophical meandering over concepts such as identity and the digital self. The viewer realizes that these entities are the front and back of the same face, struggling with itself. “It’s completely ridiculous,” Watson says. “These things he says, he thinks are really deep, but in reality, it’s not deep at all.” Watson smiles when I laugh at some of the dialogue. “I’m glad you’re laughing,” he says. “Humor is important to me in this.”

Watson’s creative process relies heavily on tinkering, a holdover from his younger years of creating one-off projects that weren’t far in ethos from his current work. Now it’s more formalized. “Revision, revision, revision,” he says. “I had no idea what I was going to do for this exhibition until summer. Even then, it’s gone through several iterations. For example, I originally hired voice actors … and it sounded like a commercial. Really fine-tuned, perfectly enunciated—I scrapped it.” Now the voices are Watson’s own, and it feels more personal. |human|’s visuals are built of odds and ends, mapped images of paintings and landscapes onto oscillating 3D models. It creates a backdrop constantly shifting between meditation and overstimulation.

This cycle of tension and resolution is characteristic of the way Watson builds his works. He describes a previous piece to me, a series of videos of decomposing bodies set to audio of a hypnotist contemplating death and acceptance. “You’re kind of watching this … almost spectacle, but you realize it’s flesh that’s decomposing,” he says. The viewer is simultaneously lulled in and repulsed. “With |human| … there will be moments where it’s overwhelming and moments where it’s near silent. I think I’ve gotten better at creating that kind of roller coaster.”

Watson’s work consistently explores imagery that feels conflicting. Watson shares David Lynch’s ability to go down the rabbit hole of creative impulse, making art that can feel as finely crafted as it is bizarre. Where Lynch gets cagey about his audience, Watson is quick to be transparent. “Art is like a transmission. Some people will never get it,” he says. “I just know who I’m talking to.”

This desire for making connections, for folding reality in a cohesive frame, is a strong connection tying Watson to Jorgensen. Where Jorgensen kneads her symbols into a pragmatic expression, Watson exploits contemporary art’s lack of boundaries to close the piece like a circuit. The fruit of these efforts is now the opportunity to experience them in dialogue with each other—both |human| and A Labor of Love will be on exhibit at Nox Contemporary through Nov. 10. View more of each artists’ work at amyjorgensen.com and justinwatson.com.