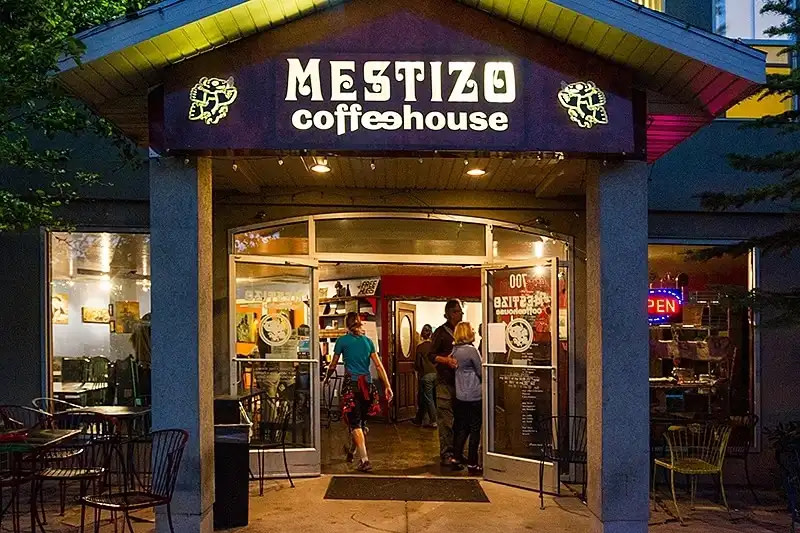 Mestizo created a comfortable and vibrant atmosphere for the event.
Photo: Helen Leeson

A Look Into Utah’s History, Artistic Inspiration From Below the Border

An appendage of Mestizo Coffeehouse, the small, glowing, cube-like space harbored a bilingual crowd this weekend—passionate Spanish articulations drifted from groups admiring paintings, videos and photographs. The hum of conversation was loud, spirited and inviting, emitting the signature warmth of Latino culture.

The opening featured five individuals—three visual artists, a dancer and a woman who, as Frida Kahlo’s goddaughter, experienced first-hand the Mexican art world of the 1930s and 40s. The show’s curator Renato Olmedo-González and co-founder Susan Vogel of Artes de México en Utah conducted interviews with the individuals, chronicling their diverse histories and connections to Mexican artists and traditions.

The transcribed interviews, each 30 pages in length, were displayed in binders on a coffee table at the center of the gallery, a fascinating centerpiece in an orbit of brightly colored images hanging on surrounding walls.

I moved through the gallery in a circular fashion, gravitating first toward a scintillating impressionistic painting of a woman feeding a child milk from a bottle. The woman’s skin is composed of bright flashes of orange, which shimmer against the sky blue of her shirt.

It is a piece by Ruby Chacon, prominent Utah artist and co-founder of Mestizo Institute of Culture & Arts. Perusing her biographic account, one can read how Chacon overcame obstacles during high school, found frequent refuge in art, and uncovered her family’s deep roots in Utah’s Mexican history, a history often overlooked or forgotten next to stories of Mormon pioneers and Anglo expansion.

Aside from vibrant colors, artistic style changed starkly as I moved on to view the work of Veronica Pérez. Smooth brush strokes and sharp lines reflect her previous experiences in the precise world of accounting—she studied business at the University of Utah but eventually devoted herself to art. Born in California to Mexican parents, she moved to Utah at age 12 where she struggled to adapt to an LDS community.

Her works display her identity as both Chicana and Mexicana, and they explore Aztec and Mayan history and political themes. One striking painting reveals a man blindfolded by the American flag, on his back a faint tattoo of North America with the U.S.-Mexican border oozing blood.

Jessica Salazar, a professional dancer, choreographer and founder of the Utah Hispanic Dance Alliance, was present at Friday’s opening. Her animation and spirit permeated her folkloric dancing showcased on video. Authentic costumes from Latin America flashed their colors on the screen, tempting a viewer to witness the fluid movements live.

Salazar’s enthusiasm for her art form can be summed up in her quote that was displayed beside the video: “The most logical, the most natural, the spine of folklore is dance. What do you do when you are born? When you are in your mother’s womb? You are moving! You are not painting, nor doing sculpture, nor reading or writing, you are moving! How are you brought into this work? The act of birth is dance…”

One can hardly have a conversation about Mexican art without mentioning the name Frida Kahlo, and Tina Misrachi Martin’s interview shed light on intimate moments from the iconic artist’s life. Misrachi Martin was born in Mexico to Shepardic Jew parents who emigrated from a town in what was formerly part of Greece.

Her father’s travels brought him to Mexico where he operated an art bookstore, which introduced his family to notable artists and writers of the era. “Well, I can still remember Frida coming home from school for lunch,” Misrachi Martin said in her interview with Vogel. “When I would get to my house I could hear her: the rustle of her skirts, the smell of her perfume. She just poured cheap perfume on herself.”

From black and white photographs of Misrachi Martin’s star-studded life, I meandered over to the display of Jorge Rojas, an artist born in Mexico City who moved to Provo at age 6. Rojas presented several distinct works from various stages of his artistic development, and in our conversation Friday, he passionately elaborated on his performance piece, the Tortilla Oracle shown on a small monitor in the gallery.

As the name of the work suggests, Rojas interpreted the marks, spots, and shapes on a person’s corn tortilla. “When people read the ‘Torilla Oracle’ they immediately chuckle,” he said, admitting the piece began as a lighthearted experiment. However, he added, its meaning continues to deepen as he develops the ritual around each reading.

Corn is sacred in Mexico and South America, and its history is entwined in folklore and tradition. The performance allows for human exchange, a very important feature to Rojas, and can serve as a window to the subconscious.

While flipping through the dozens of pages of transcribed interviews, I reflected on the fascinating cultural mixture one can find in this state with a little searching. Spanish names are stamped on our cities and landmarks; it’s a wonder that their artistic culture isn’t exposed more often.

At Mestizo, one can wander between vivid visual creations and the bold complicated lives that produced them. The show was a condensed library for research and contemplation with painted windows that opened into human experience, something mystical and raw, spiritual and sober, nostalgic and exuberant.

The exhibit will be open to the public until October 12. More information can be found at the facebook page of Artes de México en Utah.