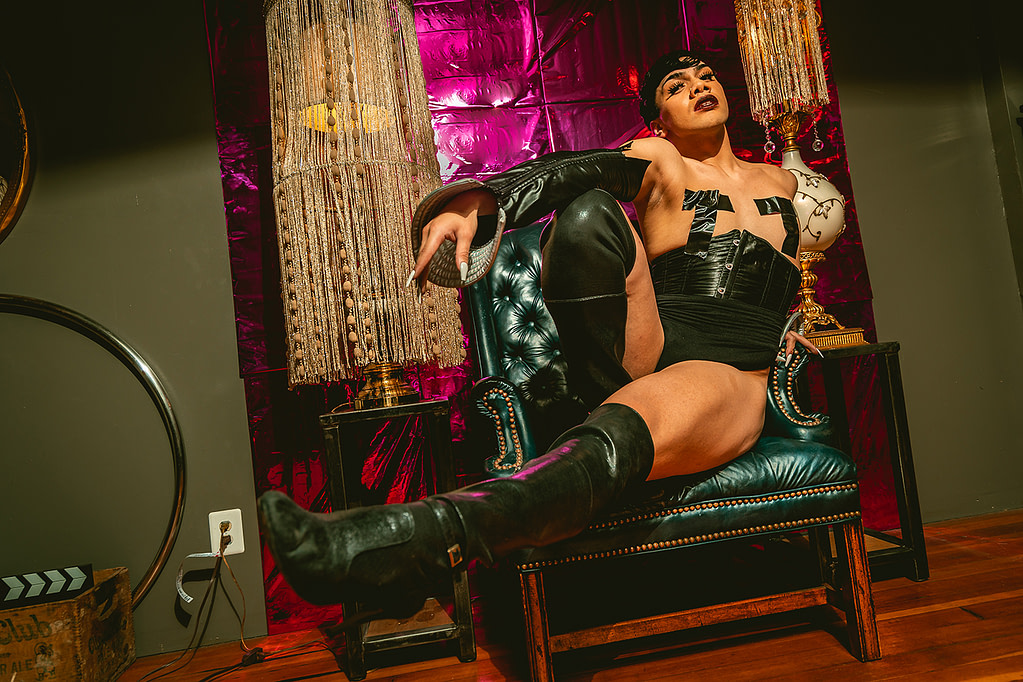 Spicy and sweet, flexible and fluid with the ass of an angel, Trey Rayne is THAT girl and one to keep on your radar. This beautiful human covers a broad spectrum when it comes to their art, dance techniques, style and gender presentation. Trey has been dancing since they were a wee, West Valley babe, works with youth in an after school program as an educator, is a style enthusiast and boundary pusher. Genderfluid, preferring pronouns he/she/they, Trey has been moving through the ranks as a community icon, dancer and dreamer, sharing their ideas and movements. Anyone who’ll take a peek won’t be disappointed in the beauty they see.

As a queer person of color, Trey has learned to navigate the complexities that come with living in a place that hasn’t always accepted or understood them. Still, they’ve found ways to integrate their ideas out to the world. Trey’s been dancing“Since I popped out the pussy,” as they put it, and has continued studying and experimenting and performing since. Trey attended Salt Lake School for Performing Arts (SLSPA) from 2016–2020 while also attending Highland High School.

No artistic medium is off limits for Trey, who studied music, theater and dance at SLSPA. They’ve learned modern, jazz, hip-hop and other technical styles, but have always liked the rawness of urban/street/club styles. Several years ago, Trey joined an all-Polynesian dance crew called Nu-Tribe and has established deep relationships with other members. Although the group is not as active as they once were, Trey still dances and competes with the friends and family they made there.

“I want to move to a space where I’m not just a dancer, but an artist … fashion and dance both get what’s up [in my head] out.”

Trey also takes classes from  the Hip-Hop Education Resource Center (HERC) leading to a newfound love of participating in dance battles around the valley. “Battles have taken up a prominent space within my journey this past year,” Trey says. “I love the competition. Whenever I can, I like to film videos to create content of freestyling, choreography [and] collaborating.”

When I say this kid’s got time and the world ahead of them, I mean it. At only 20 years old, Trey first started in the ballroom scene when they were about 16 and walked their first SLC Slay Ball in 2019. Their biggest strengths in performing are waacking, voguing and runway where they can showcase any style they choose. Occasionally Trey will take on a Face category, and they want to build up to competing in the “Body and Sex Siren” category. “It’s empowering to me [to compete] in those battles because it isn’t as large of a community here in Utah as the hip-hop scene or the breakdancing scene. It’s still very much on the come-up I would say because they’re queer pioneers and [because of their] ‘feminine’ styles,” Trey explains. “It’s good to have in my pocket because this is my people’s shit. In some senses I’ve inherited this, and I have a responsibility to upkeep it within this community in Utah as well.”

“People who want to talk just to talk—you don’t have any part of my life. You don’t pay my bills. Jealousy is a disease. People who are fully happy with themselves and want to see other people thrive won’t act like that.”

This gorgeous creature not only has an incredible bod that lends itself to interesting lines and shapes, but they also have an amazing sense of fashion. Trey’s personal style mixes hip-hop and modern techniques with a generous sprinkle of femme movements and killer fashion. “I want to move to a space where I’m not just a dancer, but an artist … fashion and dance both get what’s up [in my head] out.” You can bet we’ll be seeing Trey in some hot spot such as Los Angeles, Atlanta or New York City werking their ass off, meeting new people and catching the spotlight in spite of, or perhaps because of, the more cutthroat (and scary as hell) competition and progressive fashion to be found there. “I love being outside of the box and thinking how I can go further with this,” Trey says. “When it comes to the battles that I do, I like to create a statement and use my outfits to send a message.” They were able to use this at a recent performance where the Bonnie and Clyde theme was gendered with men and women as couples. As someone who is genderfluid, Trey didn’t feel that they fit either or category, so they performed as both Bonnie and Clyde, challenging gender norms. Trey’s thinking? “If you’re not doing that with your art, what statement are you making and how are people gonna remember it?”

Being gender-fluid, Polynesian and residing in Utah, Trey grew up in a challenging position and continues to push the boundaries of self-expression and art. Fitting a mold has never been appealing to Trey, especially as someone so outwardly effeminate. “People who want to talk just to talk—you don’t have any part of my life. You don’t pay my bills. Jealousy is a disease. People who are fully happy with themselves and want to see other people thrive won’t act like that.” As long as Trey is good, they’re able to show up as their best self every day.

Trey’s love of dance, the arts, themselves and most importantly their community shines from their core. Currently, Trey is taking an end-of-year break to take stock of 2022 and to work on brainstorming new content, performances and looks for the upcoming year. Be sure to follow their journey on Instagram @treyrayyy and pay a girl for their hard work on Venmo @TreyRayne because, I’ll say it once and I’ll say it again, always tip your local artists!