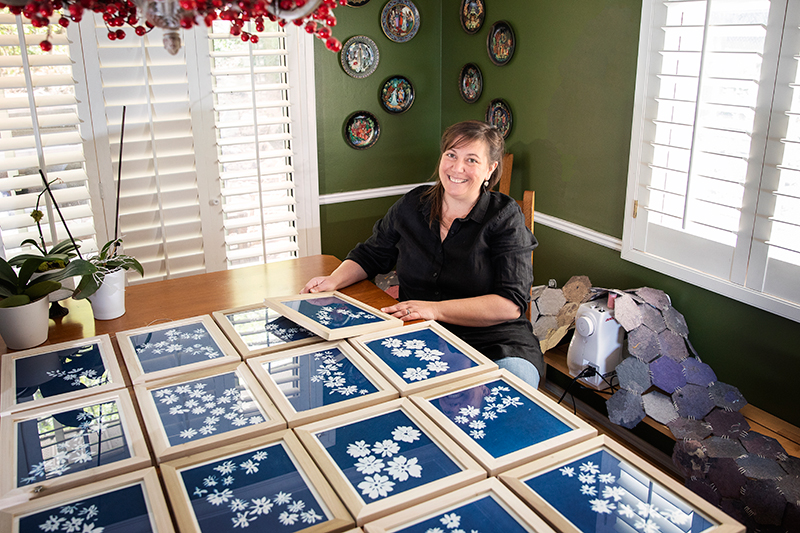 Artist Céline Downen: For the Love of the Litter

“Can you be an artist and a mother?” SLC multimedia artist Céline Downen asks me this question as a sort of setup, knowing that yes, of course you can—you must. Art subsists on the life of the artist. The brighter, tougher question buried underneath is “What art is made possible by virtue of being a mother?” The Quotidian Details, Downen’s exhibition opening at Finch Lane on June 14, offers us so many answers—each one provokes even more questions about our relationship to home, personal space and daily work.

Core to Downen’s process is observation. As a mother to two children, Downen finds that her workspace and home seep into each other. All around, she discovers leftovers of her family’s days, particularly her children. For instance, both had a habit of leaving stray strawberry stems and leaves around the house after snacking. Rather than throw them away, Downen collected the leaves and created a series of 16 cyanotypes titled “Strawberry Seasons,” making elegant art out of waste. “I challenge myself to use these materials around me,” Downen says. “I’m embracing what my life is rather than trying to put on a façade of being something else, whatever that would be.”

“I’m just fascinated by these birds.”

This idea of authenticity, of collecting everyday materials and looking around herself and her community have all been strong themes in her work for years. She brings up nesting, tells me about her interest in birds and how they build. “They’re very particular about nests and their homes,” Downen says. “Some will gather natural materials from around their space. Magpies, they don’t really care what’s in their nest. Sometimes you’ll see construction tape and string, big wads of plastic.” Downen became particularly fascinated with the bowerbird, which are more particular. Male bowers build tree-like structures primarily using wood. One variation they’ll often construct is a thick piece of wood with sticks around it. Bowers will then collect particular objects and decorate their nest. Downen plans on emulating this with at least one of her pieces. “I’m just fascinated by these birds,” she says.

Knowing this, Quotidian Details clicks into place. Downen has saved hundreds of eggshells from breakfasts she’s cooked for her family. Dryer lint from 146 loads of laundry are pressed and cut into hexagonal shapes. It’s a form of nesting that also documents the passage of time, slows its slip through aging fingers. Another piece, “Trip Chain,” tracks the amount of times Downen has had to stop and go at stoplights in her daily errands to pick up her children from school. This is visualized through stitches on cloth that depict the route she takes, with different stitches showing when she hit a red, yellow or green light. Her kids help with this, taking notes for her as she drives.

“Everybody benefits when you give yourself space.”

Looking at Downen’s pieces I find myself thinking about the concept of domestic labor—the work we expect of mothers and wives that is so integral and yet so backgrounded. Downen subtly brings forward evidence of this labor and presents it in a way that disarms and delights. Small tasks add up over time, and seeing them this way creates an overwhelming sense of gratitude. Downen’s motherhood is consistent and strong—to take care of her children, it must be, but Downen as an artist is also expressive, clever and resourceful. In repurposing her own work, she places an importance on these traits, and it creates a kind of gift for her children that they will probably not realize the value of until much later. Sometimes they’ll help their mother create;”quests,” they call them: gathering wood, tracking stoplights, finding materials—but their most important role is simply to be children. One of Downen’s most beautiful pieces is a pair of to-scale cyanotypes of her children, made by having them lie down on a cloth during the cyanotype process. The result is a sheet with their imperfect silhouettes imprinted on top, a piece of their youth preserved by their mother as an object.

And yet, though she proves so much is possible in being both an artist and mother, Downen also feels anxious at times, worried to rest rather than continue her work. She’ll feel guilty—how does her work potentially distract her from the life it draws from? “The last couple of days, I’ve spent just working with lint,” Downen says. “Sometimes the kids are asking me questions, and I want to just say, ‘This is my time.’” It’s easy to forget how important “me” time is when others rely on you, she tells me. “Kids need to learn it though, too. Everybody benefits when you give yourself space.”

“Talking about daily work is cathartic, like having a long, overdue conversation.”

Inevitably, Downen and I talk about her mother and their relationship, what inspired her and what frustrated her, what she could and couldn’t appreciate as a child. We talk about our own schedules and what it means to ask for time and space for yourself. I think on the ways I have nested over the years since leaving home, taking trash and treasures with me. Inevitably, I think of my own mother and the hundreds, probably thousands of eggs she has cooked for me, the loads of laundry she did for me. I think of my friends, whose mothers could not or would not do the same. Quotidian Details explicitly invites these thoughts, even offering viewers the chance to hang their own musings on life’s mundane and daily tasks above an old, wooden school desk Downen has repurposed. This collaboration is important to Downen, and I can see why—talking about daily work is cathartic, like having a long, overdue conversation.