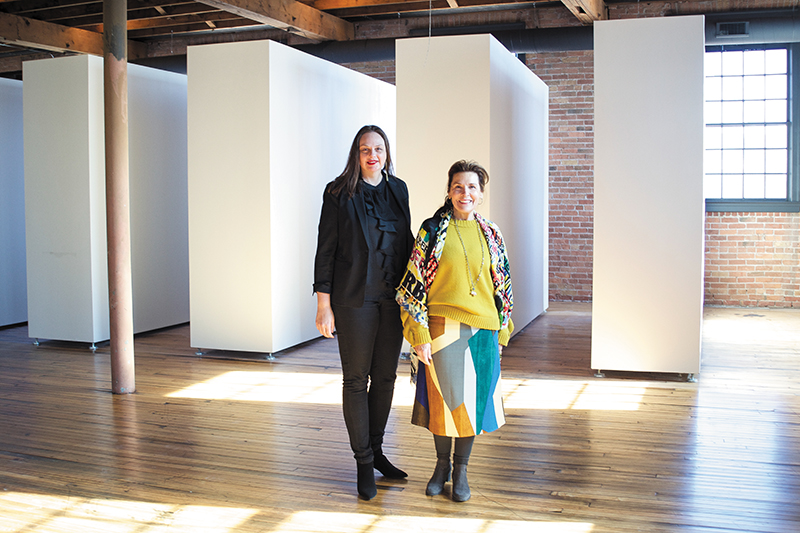 I met the owner and curator of Modern West, Diane Stewart, and felt how influential her presence is. She’s a powerhouse of artistic curation and collection, as she has been on boards for multiple organizations such as The Leonardo and ZAP (Zoo, Arts and Park services), the Utah Symphony and Utah Opera. She and Modert West Gallery Director and Curator Shalee Cooper—an impressive woman in her own right—both have an intense vision for this new space. Stewart has been traveling the world to art fairs, galleries and museums to build this vision, and you can feel the weight of that research when she describes how it’s made her think about the opportunity now in front of her: to expand and shift from being a fine arts gallery to a contemporary one.

In order to reach Modern West’s new location (412 S. 700 West in the historic Salt Lake Engineering Building), you must physically approach it from the west. It’s as though you must meet the gallery on its own terms, as you must reckon with the space itself. When I saw it, the new gallery was unfilled yet already humming with energy. High ceilings, brick walls, space for installations with movable walls to reset and redesign the flow—when you dream of an art gallery, you could easily be dreaming of this space.

“People in the west are different than people in the east. They experience their lives differently—there’s more space around them. We don’t live so vertically here. I talk to people who have lived in both places and ask them, ‘Well, what do you like about life here?’ And they tell me: ‘This!’” Stewart gestures upward and outward, as if to point to the amount of room and space itself. “It’s hard to quantify,” she says, “but it is a sense of openness and friendliness that is very different from an urban experience on the East or the West Coast.” The desire to communicate this is what has fueled the move in venue.

Stewart’s current location on the corner of 200 East and 200 South (closing on March 18) has been a great starting point. As Cooper points out, though, Stewart has evolved as a person and collector. So, too, has the gallery, which will focus more on contemporary art that attempts to excite and engage in ways the new space affords. “I started the gallery just over five years ago,” Stewart says. “I’ve been a longtime collector and always engage with a lot of public art … In my collecting past, I developed a lot of relationships with artists, most of whom did not have representation in Utah.” Now that Stewart is well-established, the time for change in space and attitude has come. Cooper notes that this inherently allows for more kinds of art, such as sculpture and installation pieces.

Stewart’s stable started with about 30 artists, five of whom were Indigenous artists—an important curatorial aim for Stewart. “Modern West is not a ‘cowboy and indian’ gallery—it is really a gallery that reflects the contemporary west … We’re firmly rooted in the west, so all the artists we represent have some connection to the west, either through inspiration or where they live or have lived.” Modern West challenges its artists constantly, making sure they never rest on their laurels and are always growing. Last year, when the legislature voted on changing the liquor laws, Modern West’s artists were all asked to create art on the subject, one piece of which will headline as a video installation when the new gallery space opens. “It’s a uniquely western experience,” Stewart says, and it showcases the move to more conceptual pieces.

Another significant opportunity that Modern West brings is a Taschen bookstore, one of the few locations for the artbook publisher to exist between the coasts. It fits directly into how Stewart envisions that Modern West can be accessible. “We’ll do a curated selection of Taschen books that will include art, architecture and design. We’re really hoping the gallery presents to our patron something at every price point and that everybody can engage with something in the gallery, whether it’s through art, literature, design—something.” It’s by no means meant to be a one-stop shop for artistic curiosity, but Stewart does want to expand what she and the artists can offer as much as possible. Part of what enables this is Stewart’s decision to represent a gender parity of artists, especially tackling the concept of the west, which Stewart points out has often been framed by a masculine and colonialist narrative. Fostering more female and Indigenous artists help combat that.

Perhaps what stands out to me most of all, after talking with Stewart and Cooper, is their commitment not just to art and expressions of the contemporary west but of how they relate to the artists with whom they work and display. Stewart describes them as a family, as people who come to each other for help and support. Seeing the gallery bare, I’m only more excited to see it open and brimming.

The Modern West new space opening is set for April 19, 7–9 p.m. Visit and feel the energy for yourself this spring.