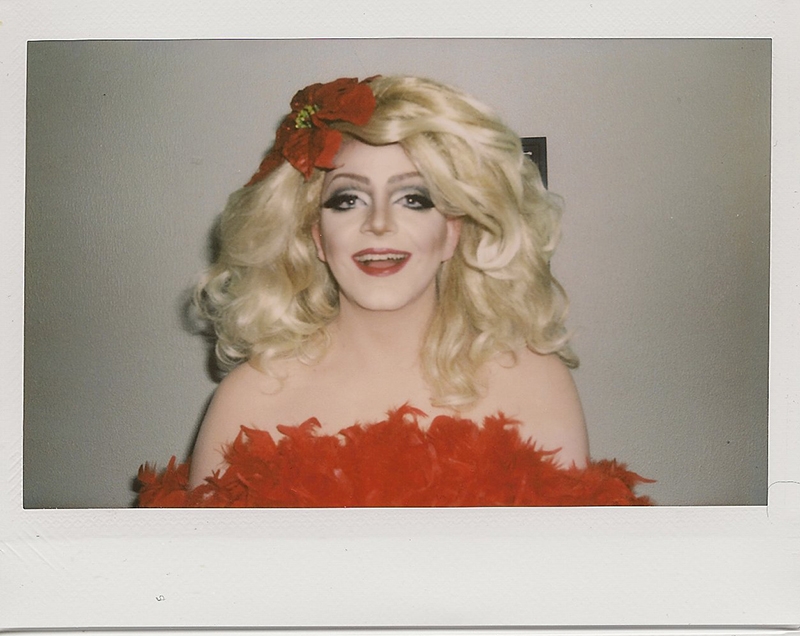 “One of my favorite things about my drag is my name,” Daye says. Photo: ThatGuyGil

The Bad Kids Collective of Salt Lake are cultivating a scene where diverse gender expression reigns, where talent refers not to exclusive abilities, but rather the courage to get on stage and perform one’s artistic vision to completion. Instead of focusing on feminine expression, the Bad Kids use performance as an educational tool to widen the conversation between our queer communities to include all of its members, often divided by sexuality, gender, orientation and biology. For its fifth Creature Feature installment, SLUG spoke with camp queen Mae Daye about her humble descent into drag, her friends and supporters and why the Bad Kids’ brand of performance is a breath of fresh air for Salt Lake’s queer nightlife.

Like many other drag performers, Daye’s first exposure to drag was on Halloween. As a fan of zombies and horror flicks, and as a member of Salt Lake’s Geekshow Podcast community, Daye participated in a Brewvies Halloween costume contest a few years ago, where he dressed as Julia Child. He thought, “Well here’s an excuse to try drag for the first time— I thought it would be easy because she looks like a dude, she’s tall and she dressed like an old lady, which would be pretty easy to do.” He won the contest that year, and again and again as Miss Marvel and She-Hulk (reprised during ComicCon this year ).

Mae Daye’s first drag performance in the gay community was at an event for the Royal Court of the Golden Spike Empire at the Trapp in January. “It was my first time ever at the Trapp, and only my second time at a gay bar—it was intimidating,” says Daye. The performance was so well received that people couldn’t believe it was her first. “They all thought that I’d been doing it for years,” she says—“I took that as a huge compliment.”

Her first encounter with the Bad Kids was at a season premier of RuPaul’s Drag Race at TryAngles shortly after. “I remember seeing Cartel and being really intrigued because she was so different from people in the Court,” she says. Cartel saw Daye’s potential and invited her to perform at Metro Bar, and in March, the two shared a stage during the Bad Kids’ Sorority Cemetery Show. Mae Daye’s performance style—campy, comedic and endearing, often with distinctive oversized hair—won over the Bad Kids community and she’s been a prominent member since those early performances, one of which was a loveable rendition of “Dancing Queen” at the Bad Kids’ ABBA Tribute show.

Though Mae Daye is on good terms with the larger drag community, she’s found a comfortable yet challenging home at Metro with the Bad Kids. Mae Daye enjoys the conviction that participating performers bring to the scene. To be a Bad Kid, Daye says, “You’ve got to do the drag that you want to see and not conform to what other people want you to be. We all do exactly what we want to see regardless of whether we fit together or not. That’s what makes us fit together.”

“One of my favorite things about my drag is my name,” Daye says—“My makeup can get better, my hair, my outfits,” she explains, “but I don’t think I could’ve picked a more perfect name.” The origins of the name are in Daye’s love of James Bond films: “One of my favorite Bond girls is Grace Jones in A View To Kill. That was her Bond girl name—May Day.” A great test for a drag name: “It’s got to be fun to scream,” she says. One of Mae Daye’s proudest moments this year was winning the overall crown at the first annual Bad Kids Pageant, which earned her the titles “Baddest Kid of All” and “Teen Scream.” “It wasn’t anything like you’d think a drag pageant would be because there was such a variety, such a positive attitude,” she says of the event. Her performance, a raunchy mash-up of a Producers tune and “Bitch Got A Penis,” won over the audience, but it was her helpfulness with other contestants backstage that earned her the respect of the community. “A lot of people were nervous, not that prepared,” Daye says—“I brought two suitcases worth of stuff. I’d come in, get in all of my stuff and then start helping everybody else.” It was at the Pageant that Mae Daye met Savannah van Cartier (the Pageant’s reigning Goddess), who, together with Gia Bianca Stevens and Indie Skies, have since formed a tight-knit friendship. “I’m friends with every single one of the contestants now,” she says. “We’re all pretty close.”

Mae Daye’s amiable persona and her skill at making outfits have earned her friendships among both the Bad Kids and the Royal Court. “Hair is one of the harder things in drag to learn,” she explains, “I picked it up really quick.” Daye shares this knowledge with the rest of the community by making custom wigs for others and teaching them how to make them inexpensively. “I have sixteen people that I’m making hair for right now,” she says. She makes all of her own outfits as well, a source of pride over the easy route of prefab mall drag. “Every time I come up with a good idea, whether for an outfit or performance or a concept, I write it down; I have a couple of pages just with names of future drag children.” This creativity has earned her many admirers as well, including a drag king for a son, who goes by the name Dee Daye. “Everyone calls me Mamma Mae Daye,” she says of her fans, who call themselves Maeniacs, though she doesn’t believe that she’s at the point of becoming a drag mother to them.

Mae Daye, who goes by Nicholas Stephenson in her boylife, prefers male pronouns, but doesn’t mind indulging in sisterhood with his fellow queens and performers. “I’m super cis-gendered; I’m really comfortable with my gender; I like being a boy,” he explains. But, he says, “being in drag is so much more fun. I like the character of Mae Daye—you go from being just a person in the crowd to standing out and getting all this attention that you’re not used to. It’s really empowering.”

Mae Daye will be performing at the Bad Kids’ New Year’s Eve Show at Metro Bar celebrating the first full year of The Bad Kids’ presence in Salt Lake City. Follow her on Instagram: @maedaye.