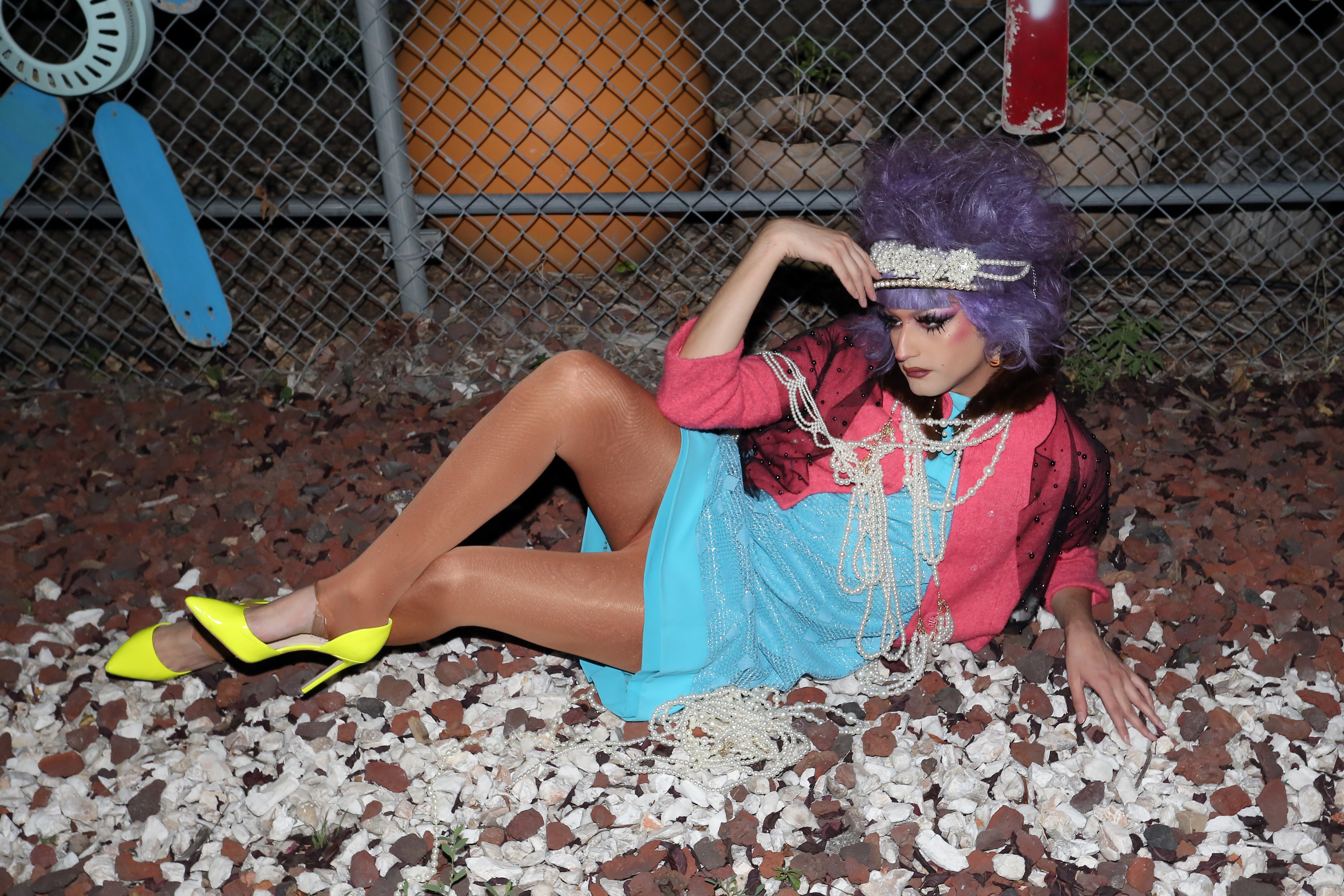 Adan Jorq is a creative performer with a powerful message and goes by the stage name of Mona Diet. An immigrant to America, he has made it his mission to create safe spaces for the queer community, POC and other minorities here in Salt Lake City. His life has been full of challenges, both physical and mental, and our current political climate has only intensified those experiences. By turning their focus to helping shift the cis-white-male-Mormon hegemony here in Utah to raising up the oppressed people of color, they have done so much more with their platform as a performer and as a member of our community.

Born in Mexico to El Salvadorian and Ecuadorian parents, Jorq came to America through the Church of Jesus Christ of Latter Day Saints, which, he adds, he is no longer a part of and is “very happy.” Upon leaving Mexico, Jorq’s family moved to East L.A., missing the L.A. Riots by just one week. “I feel like my life is very fortunate and very privileged … and I feel almost disgusting to have this amount of privilege,” Jurq says. Recognizing the privilege one possesses is a powerful tool that Jorq possesses that I believe will help build bridges and defeat oppression—which is a much-needed attribute for anyone in today’s society.

During our interview, we discuss heavily the injustices occurring at the U.S. border, South America and the world. It’s refreshing to discuss such serious topics that should receive more attention—the perspectives that both Jorq and Mona possess are so unique for our Small Lake City. Jorq is a person who cares about addressing tough conversations and spoke quite candidly to me. That emotion, expressed to me by someone I had only just met, spoke volumes to me about their character. This is truly an individual whose choice is to focus on the big picture, not just the escapist mechanisms so many of us indulge in, as an attempt to avoid the reality of our times.

“That was a bootcamp of drag. We had a show almost every weekend for nearly ten months.”

Mona spoke on her drag career, which began about seven years ago after moving to Salt Lake and being befriended by members of the Starr Family, headed by Nova Starr, and included members Kayla Starr, Midori and Vivaca Starr, who recently passed away. Through those relationships, Mona realized her disinterest in the more “palatable” side of drag. Mona then shifted her focus to working with the Bad Kids Collective and spent some time among their community of creatures. “I hosted a lot of their events and did a year stint with Mayday and Flame Fatale under DJ Robbie Rob at Metro Music Hall,” says Mona. “That was a bootcamp of drag. We had a show almost every weekend for nearly ten months. It took a lot out of me.” Mona’s style of drag is a collaboration of beauty and the grotesque, and loves embodying repetition with her looks and performances. She’s full of sass, life and love. She exudes so much energy to those around her. She is such an interesting and profound human, and someone to watch on and off stage.

Our conversation eventually shifts to the topic of mental health. We discuss the challenges of monitoring and addressing personal health needs. After experiencing a breakup, which Jorq refers to as “the only significant relationship of my life,” he took time off from drag. Online drama began to pop up surrounding Mona and her pursuits of becoming a contestant on Rupaul’s Drag Race, which she says scarred her and created a fear of trust. Since the social media backlash, Jorq also speaks on the depression he experienced, along with other health issues and tells me he’s been taking a lot of time recently to heal.

“I want to gear us up for any upcoming battles or wars against us.”

Jorq suggests that anyone else suffering from health issues should step away from social media and seek professional help. He reminds me that calling 211 is a great resource for those with any kind of mental distress, experiencing physical abuse or anyone needing any other type of assistance not associated with the police response. Doing so will connect you to a plethora of resources designed to assist with helping connect trans youth with finding a safe space, speaking with someone at the suicide hotline, accessing food stamps and so much more.

Recently, Mona is focusing less on performing as a drag queen and more time working to build up our queer community. She has been encouraging others to remember the importance of family and strength in numbers. “I want to gear us up for any upcoming battles or wars against us,” Mona says. “I don’t want to be an alarmist, or a warmonger, or a fatalist, but we’ve seen this far too many times. I never thought that I would live in a country where children are dying constantly under U.S. government care, without the outrage and people taking to the streets or driving to these detainment centers and forcing their way in or forcing their way past guards. I never thought we were there, and yet we’re here.” With so many minorities’ rights being stripped and challenged, we both agree that education and communication are key to protecting those rights.

As we are remembering the 50th anniversary of the Stonewall Riots this month, it is crucial we remember where our LGBTQ+ community has come from and the sacrifices made by the pioneers of gay rights activism such as Marsha P. Johnson and Sylvia Ray Rivera. As residents of Salt Lake, we must continually work to identify the social injustices of the world and fight for balance and equality. Through my time spent with Jorq discussing Mona and his past and present, it struck me how crucial it is to educate ourselves and each other on issues of such great importance since knowledge is power. Knowledge can help us build the safe spaces we so desperately need. Jorq states how important it is to show up to your local drag shows, give your money to local queens and support local gay bars, and participate in our LGBTQ+ community. “This is where we are, this is our sanctuary, this is our church, and it’s time to show each other that we’re here for each other,” says Jorq. “Things are going to get worse. Things are going to get much worse. And if we’re separated, we’re easily taken advantage of and easily picked off one by one.”

Although drag has taken a bit of a backseat for Mona Diet, Jorq is currently working on a project that will bring to light the queer history of the Utah LGBTQ+ community. He has begun collecting stories and interviewing individuals in our queer community and is actively looking for anyone in the community who would be interested in participating in adding their voice to the project. They are also planning on a Bad Kids reunion show scheduled for Aug. 24, 2019 at Metro Music Hall called Blip, so be sure to mark your calendars and come support your favorite, local drag queens. Jorq can be contacted at monadietslc@gmail.com or on Instagram @monadietslc. Keep an eye out for more to come from this gem and, most importantly, keep an eye out for each other.