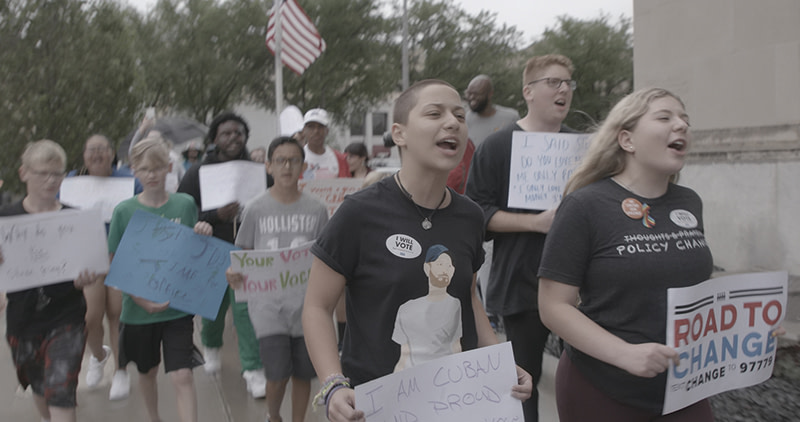 Filmmaker/director Kim Snyder was in Florida on Feb. 14, 2018, when the shooting at Stoneman Douglas High School in Parkland, Florida occured. As someone who had previously highlighted the communal trauma of the Sandy Hook shooting in Newtown, Connecticut, in her film Newtown, the Parkland shooting invoked a sense of dread and déjà vu for Snyder. “I really didn’t expect to make another movie about gun violence,” she says. Us Kids—which follows the story of grief, recovery and activism in the wake of the Parkland tragedy and came about as a result of a fiscal sponsorship from the Utah Film Center—is set to premiere at Sundance Film Festival as part of the U.S. Documentary Competition this month.

Snyder immersed herself in the community impacted by the Sandy Hook shooting during the creation of her film Newtown. She says the narrative focus of the two films is completely different, though they both share the common thread of tragedy. “[Newton] was really a treatise on grief and collective trauma on what this kind of thing looks like, the aftermath,” she says. While Newtown focused on the parents of the victims and the terrible effect of the shooting on the community, Us Kids focuses on the trauma through the eyes of the young survivors. “I thought about the country needing to understand the trauma of kids around the country, surviving kids, all kinds of kids—not just kids in towns with mass shootings but kids throughout the country who experience everyday violence,” she says.

“I want people to feel energized, angry, hopeful at times, and to do something about this surge in gun violence.”

Despite the tragedy of the Parkland shooting being so fresh, many survivors of the incident have taken their grief and turned it into a vehicle for change. Us Kids partially follows the stories of the students involved with the March for Our Lives movement, specifically the 50-city tour that was meant to raise awareness on issues relating to gun reform. “It was grueling,” Snyder says. “It was arduous. I learned so much from watching their patience, their stoicism and their resourcefulness … They did their research about what was going on in [every town] and how they might reach out and talk to people there about this issue.” Snyder came to admire the tenacity of the kids involved: “This was a bunch of kids who are 17 and 18. They’ve been through trauma, they’ve lost friends, and they were going through a lot of PTSD. At the same time, [they are] trying to change the country.”

Us Kids doesn’t focus on the actual shooting, but rather on the teens involved and their stories of dealing with the loss of their friends and PTSD. For some of the survivors, this meant stepping into the spotlight and raising awareness about gun reform through their trauma. With gun reform in America being a controversial topic, some of the teens involved have dealt with resistance from critics and, in some cases, received negative attention and death threats. “When I say courage, I’m not overdramatizing,” says Snyder. “There were situations that were really scary for them. That’s part of the courage—just actually [getting past] that first year of the trauma and trying to make your body go at times when you haven’t even had time to process the experience.”

“They’ve been through trauma, they’ve lost friends, and they were going through a lot of PTSD. At the same time, [they are] trying to change the country.”

In addition to featuring those involved in the March for Our Lives, Snyder profiles other young people affected by the Parkland tragedy. Us Kids includes stories of teens who joined the movement in other cities and survivors who simply struggle to recover from their injuries, both mental and physical. One young woman featured in the documentary is Sam Fuentes, who was injured in the shooting. For Snyder, Fuentes’ story of survival and recovery is something that is revolutionary in itself. “[Fuentes’] ability to literally get back up—even after suffering from a lot of PTSD, time and time again—[shows] what human beings are capable of,” she says.

For Snyder, the biggest takeaway for Us Kids is to find solidarity with the teens who experienced unimaginable tragedy and to motivate viewers. “I want people to do something,” she says. “I want people to feel energized, angry, hopeful at times, and to do something about this surge in gun violence.” The biggest victories for the March for Our Lives movement had to do with increasing voter participation, especially among young and first-time voters. During the March for Our Lives tour, Snyder recounts that the stop in Salt Lake City had one of the best turnouts. For her, the impact of the tour was felt in the midterm election with the surge of new voters and the political focus on gun reform, something she hopes to convey in her film.

“Us Kids is told through the lens of youth,” Snyder says. “It was an attempt to give them their voice. The teenage activism around this is different so the film tries to honor that. [Us Kids] has enormous hope.”

You can find scheduling information for the Sundance Film Festival premiere and subsequent screenings of Us Kids at production.sundance.org/projects/us-kids.