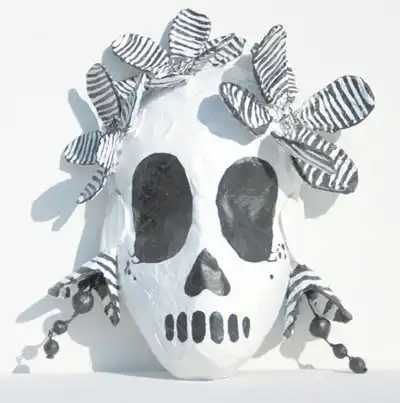 On the third night of October all the ghosts and goblins head out to the street strolling for blood, and the sweat of local artists. Tricks and treats await those who dare venture out on Friday the 17th, also known as THE GALLERY STROLL!!

Carolyn Pryor (Skull Girl) is far from spooky despite her choice of subject matter. Like a story from Tales from the Crypt, skulls began manifesting themselves in Caroyln’s life. Just as this call from beyond was being dialed, friends Jason and Vanessa of Alchemy Coffee got on board with the inducement, and began a whole logo and marketing plan using a rendition of one of her skulls and Skull Girl was born.

Carolyn’s skulls and skull related art merchandise have become wildly popular due in part to the spirited way she represents the skeleton. “It’s challenging but I’ve tried to make skeletons friendly, loving and happy. We’re all hanging out with one,” Carolyn jokes.

Not just for Halloween, Carolyn related to me the little known fact that skeletons are the third most collected item according to the Antiques Roadshow, and you know those people see a lot of collections. If you are looking to start a collection or just want to see a happy skeleton, the stars have aligned for you this gallery stroll.

Carolyn will have two shows simultaneously, one at Alchemy Coffee on 390 East and 1700 South and one at Charley Hafen Gallery located at 900 East and 1411 South. These two shows will have completely different art but the same theme: LIFE-DEATH-LOVE.

Ah, to be young again! The world is new and you can aspire to do anything, including having your own public art show at the age of 7. That is, of course, if your name is Lily Griggs.

Lily’s Art Show as it’s so eloquently titled will consist of polaroids and acrylic paintings. This feisty young woman wants to go to Disneyland and nothing including budgetary restrictions is going to stop her. Show opens Friday October 17th in the back hallway of Nobrow Coffee (300 South 315 East), which from this day forward will be referred to as the new location of Disorderly House.