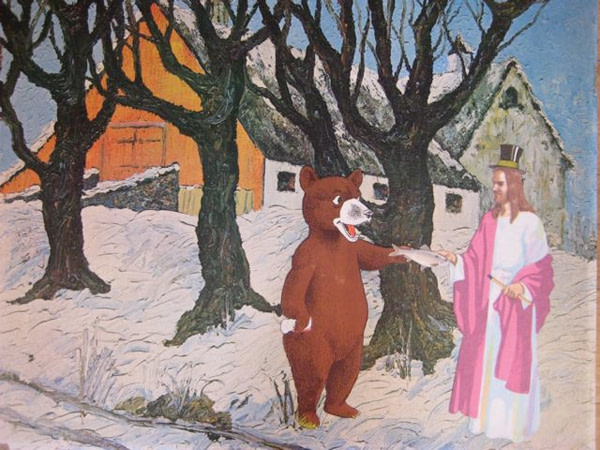 Several years ago, a dear friend of mine, Alex Ferguson, found a bust of Vincent Van Gogh at the Deseret Industries. He rescued the piece, photographed it and framed the photo with the title “Vincent, what are you doing here at the D.I.?” Now, that “found art” adorns my entryway in a place of honor for all to see.

We’ve all heard the saying “One person’s trash is another person’s treasure,” Salt Lake City artist Reclaimed Sentiment is putting that theory to test. Using discarded mass-produced landscapes and old LDS Primary class images—often found at Deseret Industries—Reclaimed Sentiment transforms the unwanted and forgotten into the extraordinary and refreshing by following two rules: Everything used to create the art must be found secondhand and the art must be affordable and accessible to the masses.

Narcolepsy, anthropomorphism, American idioms, cephalopods, schadenfreude, and America’s favorite pastime, television, have been just a few of the fun themes Reclaimed Sentiment has focused on in the recent past. With that kind of history, it only seemed fitting to focus on Big Brother himself—Jesus Christ.

Imagine if Jesus came back to Earth—forget all the apocalyptic stuff and just think about what he would do on Earth if he could walk around without all his celebrity status—hanging out like an average joe, just being himself on a Sunday afternoon. The artist assured me it’s not meant to be blasphemous, just a further exploration of the Christian youth motto “What would Jesus do?” Coincidentally, that’s also the title of the show.

Leading up to this show, a Facebook poll was started asking the public what they think Jesus would do for a job. Surprisingly, someone suggested he would work at Subway.  Perhaps it does take a special person to make those five-dollar footlongs. Maybe he already works there, and that is how they keep their prices so low—he’s multiplying the bread!

The show is less about being irreverent and more about opening up the space in the viewer’s mind to think about the possibility of Jesus as a man. What Would Jesus Do? opens on April 15 at Stolen and Escaped in the basement of Frosty Darling at 177 E. Broadway. Artist reception runs from 6-9 p.m.

Now from the ordinary activities of a deity, we’ll move to the extraordinary activities of the “who’s who” in SLC. A Vanity State by Dia Diabolique will grace the walls of the ultra urban chic Ulysses Salon high atop Sparks Clothing store on 629 S. and State Street.  Always creating a scene, our beloved Princess Kennedy, queen of many things, has been adding art curating to her résumé for the last six months.

A Vanity State will include various people within Salt Lake’s fabulous scene, interpreted on screen graphics and woodcuts, by the lovely Dia of the Slippery Kittens.  Moral of this story: If you feel too pure after WWJD, come indulge your vain vein at Ulysses. Artist reception takes place Sunday, April 17 from 6-8 p.m.

Keep in mind these shows are free and only a sample of the amazing work available on display from hundreds of Utah artists during the monthly Gallery Stroll. Gallery Stroll takes place the third Friday of every month. Save the date, walk the streets and get to know your city’s underground art scene.