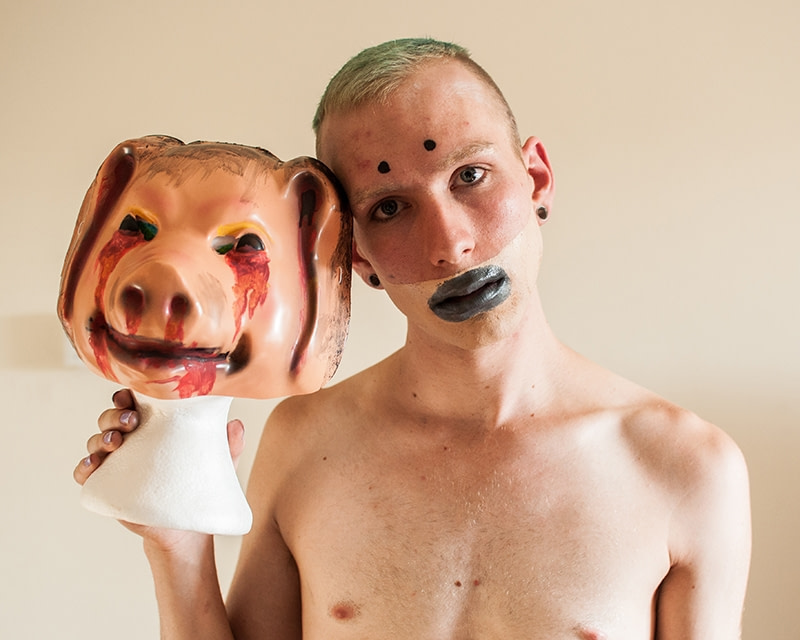 Halloween is ruined. Its most treasured sensibilities are under attack. Goths have turned the occult into ridiculous camp and queers have turned ridiculous camp into a cult. So, if Oct. 31 is the only day of the 365 that you’d think of dressing yourself up outrageously, you might be a lamebrain. For today’s youth, every day is Halloween—every day is a drag and every outfit a costume. For local performance artist Klaus von Austerlitz, every costume is a performance, and every performance a carefully constructed vessel of artistry and social critique. Here’s Klaus’ advice on costumes 24/7/365, performing with Salt Lake’s Bad Kids and showing society its own ugliness.

What began as an interest in high school theater soon became a passion for expressionism and art. “I’ve always been used to being in front of people, doing something, whether it be with an instrument or half-naked,” says the Utah native. “Klaus is a character that I made up a long time ago, kind of like an imaginary friend, but I was too old to have one.” After living in Phoenix for three years out of high school, Klaus came home to Utah. “When I moved back here, that’s when the creativity started again,” he says. Along with Cartel Chameleon Fenicé, a friend from the same, small Utah town, the character Klaus soon became realized. “We saw a drag performance at Pure,” Klaus says, “just an average pageant-girl routine with big hair and some dumb pop song. We had this conversation, and we told ourselves that we could do that—let’s start going out, dressing really crazy and doing something fun.”

Klaus and Cartel’s ambition only grew from there. “After the Great White Whale, Nova Starr [Salt Lake’s reigning queen] left, the drag scene was kind of open,” says Klaus. Rather than being inclusive of varied gender expression, it was only “another patriarchy disguised as feminine bonding,” he says. “We got a show at Paper Moon, and that was our first—we felt like a bunch of bratty, naughty kids.” Attracting already established gender-benders and young talent alike, this small group of friends quickly grew to become the happiest family in Utah’s diverse gay scene. Their continued success is due largely to Klaus’ organizational skills. “I’ve worked as a dresser for Pioneer Theater Company, and because of my education, I know what to do, how to run a show. I’ve done these big productions with fancy actors from New York and the whole shebang,” he says. Klaus acts as a stage manager for the Bad Kids, who now perform regularly at Club Metro and elsewhere in downtown Salt Lake.

Klaus’ theatricality developed through his studies in performing arts design at the University of Utah. “The most basic idea of theater is an audience and a performer, and that goes on every day,” he says. “There’s all these roles and rules that we have to perform in front of people—cultural, racial, economic. You act differently in front of your parents than you do your friends: Everything is drag—we’re always performing.”

Klaus often blends scary and kawaii imagery for a confrontational look. One favorite of Klaus’ is geisha-white face paint, small black lips and Mickey Mouse ears. “I love taking things that are really positive but fake at the same time and making them scary. I wear Mickey ears because Disneyland is such a fairytale—everyone wants to go, but the ugly is there, too,” he says. Klaus uses performances to take that ugliness and throw it into catatonic society’s face. “There are some times I’ve done myself up and looked in the mirror and said, ‘Oh god, who are you?’ The one thing that’s gotten me in the most trouble was my Halloween performance last year. It was the second or third month we were performing at Metro: I had green hair, and sang ‘I Love To See The Temple,’” he says. While deconstructing the hymn’s lyrics, Klaus found them to be quite awful. He asked himself, “How do I bring that same disgusted feeling I got into a costume and a performance? It was my big ‘fuck you.’”

Being a performer year round makes Halloween a bit passé. “I’m not even that excited about Halloween anymore because I dress up and have that experience all the time,” he says. Holiday or not, Klaus has some sound advice for any occasion: “When I’m trying to think of a look or a costume, I draw it. For a lot of people, Halloween is their night to dress up––doing makeup tests is crucial,” says Klaus. “In order to not ruin Halloween, practice your look.”

Let’s see some terrifying costumes this year, SLC. You’ve still got time to perfect your today, tomorrow, Halloween or whenever looks. Find Klaus and the Bad Kids at Club Metro on Thursdays, and check out more photos from our shoot at slugmag.com.