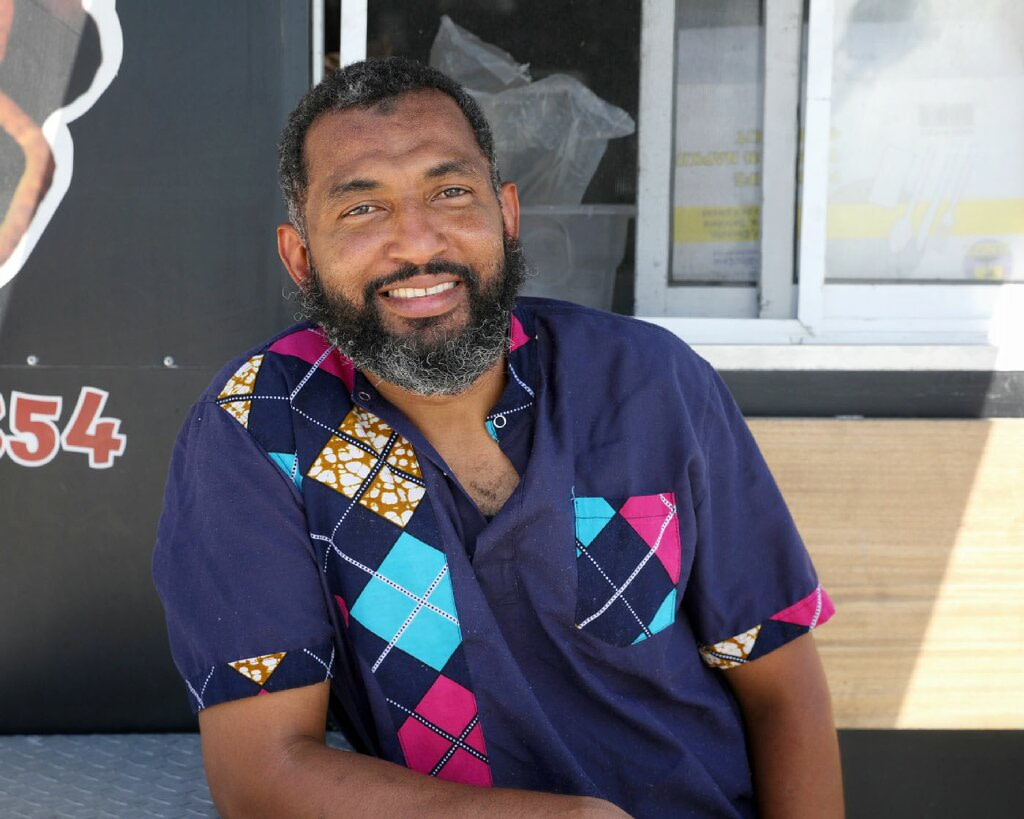 Despite growing up in a culture in which men are not allowed in the kitchen, Abudujannah Soud has been cooking for as long as he can remember. According to his grandmother’s rules, everyone in their family had to learn how to cook.

Soud, the Chef/Owner of Kafé Mamai catering and food truck, was led down this culinary path by a love of innovating in the kitchen. “I give credit to [the] women in my family, especially my grandma, for the inspiration,” Soud says, “thinking outside the box by trying to find ways and new methods of cooking.” In fact, “Mamai,” the business’ namesake, is a tribute to his grandmother’s nickname, meaning “mom water” in Swahili.

Originally from Lamu, an island off the coast of Kenya, Soud first realized he was a good cook when he was part of a boarding school team assigned to figure out how to feed 150 of his peers for the month of Ramadan. When he moved to the United States, Soud worked in construction and furniture making. Eventually, he ended up in professional kitchens, where he rose from washing dishes to running a restaurant.

“I give credit to [the] women in my family, especially my grandma, for the inspiration.”

In the early 2000s, Soud and a friend began a culinary pop-up business called Love and Joy. They served food at the busiest flea market in Santa
Fe, as well as any outdoor music festivals in the area. He moved to Salt Lake City in 2016 and immediately began to find a way to get back in the
kitchen. “That’s when a friend told me about SPICE Kitchen [Incubator], and that has been the success of what [I] am doing now,” says Soud.

Inspired by the model used by La Cocina in San Francisco, SPICE Kitchen Incubator is “a food business incubator focused on creating opportunities for refugees and disadvantaged individuals.” SPICE aims to improve the chances of success for culinary entrepreneurs through affordable access to commercial kitchen space, proper food handling practices and other resources to help their business flourish.

Soud says despite having great credit, his religious beliefs prevent him from taking out loans with interest. He considers this a “blessing.” Soud worked three jobs simultaneously to fund the start of his successful food truck.

Kafé Mamai’s African-Caribbean fusion is split into two menus: one for catering and one for the truck. Catering is available for weekday dinners, as well as lunch seven days a week. Those interested in having Kafé Mamai cater an event or meeting can choose from a variety of delicious options, such as beef or vegetable samosas, grilled pili pili shrimp, or Maharagwe Ya Nazi (kidney beans cooked in Swahili mixed spices and served over basmati rice or chapati).

If you’re lucky enough to run into the food truck, consider indulging in fried plantains dusted in cinnamon, the Moroccan lamb burger, or bhajia (a kind of crispy, black-eyed pea fritter). “It’s a trial and error process to make new items,” Soud says. “I mean, creating a fusion of any cuisine is harder than doing it as it’s [traditionally] done, and that’s my favorite thing to do.”

When I ask if he has encountered any racism in the United States, and particularly in Utah, Soud recognizes food as a bridge: “Food, as it has always been referred to as ‘breaking bread,’ is the best form of tearing down walls.”

“It’s about starting the conversation and educating skeptics or rather, addressing the fear of [the] unknown.”

While some Utahns may consider Kafé Mamai’s food to be an entirely new culinary experience, Soud notes that he has encountered receptive and curious eaters. “Utahns are responding well to the food,” he says. “It’s about starting the conversation and educating skeptics or rather, addressing the fear of [the] unknown.”

It may seem like Soud is a hard-working, compassionate, creative culinarian, and you’re right. But when it comes to big dreams of what’s ahead for Kafé Mamai and the growth of his edible empire, Soud is taking an unwearied, come-what-may approach. “Dreams are for sleepers,” he says. “I don’t dream—I work hard and leave it to God. If it’s meant to be good for me, it [will] happen.”

Soud looks forward to continued success with the Kafé Mamai food truck and catering opportunities, hoping to convert even more voracious enthusiasts. “I do appreciate everyone that takes chances and comes and tries what [they] don’t know,” Soud says, “and hopefully we make you a fan.” You can become a fan of Kafé Mamai’s jerk chicken or curry goat stew by looking for their scheduled stops, typically posted on their Instagram account (@kafe_mamai).

One of those forthcoming stops includes the second SLUG Picnic, an outdoor, socially distanced music showcase on August 22. You can learn more about Kafé Mamai, as well as ways to try their unique take on African-Caribbean food, at spicekitchenincubator.org.