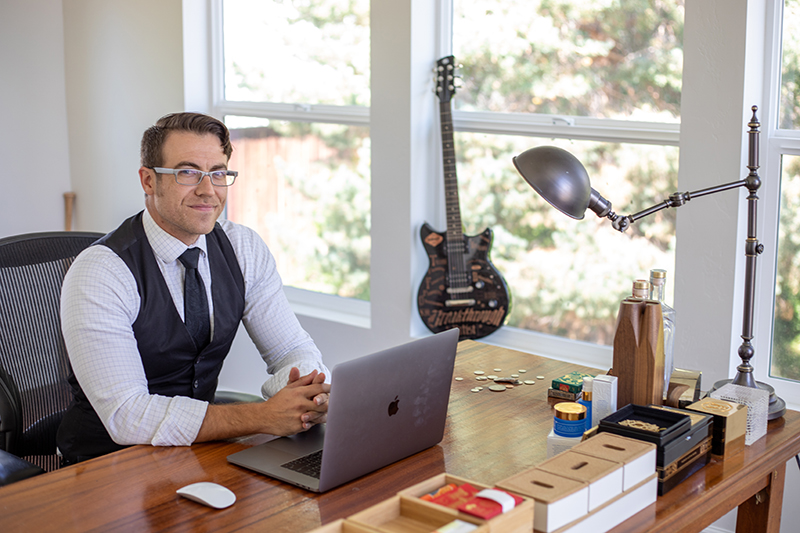 In the Pursuit of Excellence: Kevin Cantrell and the Business of Typography

As a senior in high school, Kevin Cantrell observed a friend creating a system of brand logos and fonts for a project and immediately knew it was what he wanted to do. “In my first year taking design classes [at Brigham Young University], I discovered I had a natural ability with typography,” Cantrell says. “It wasn’t until my senior year of college that I really started playing more with drawing custom typefaces from old reference material.”

After receiving his Bachelor of Fine Arts in Graphic Design from BYU, Cantrell began delving more into lettering and ornate typography as his erstwhile profession grew more taxing and boring. “When I lost my love for my job,” he says, “I rekindled my passion through lettering. It changed my entire course.”

Cantrell runs Kevin Cantrell Studio along with Erik Attkisson, who focuses on business management and brand strategy. “If you are going to run a studio, you quickly realize you can’t do it all yourself,” Cantrell says. “You need to have someone whose abilities complement your own skill set.” Attkisson and Cantrell work synergistically, often working from one another’s discoveries and ideas. “I’ll come up with something [whose] visuals feel right, and he’ll discover that it fits perfectly in the strategic expression,” Cantrell says.

While some artists might use pen and paper, Cantrell credits advances in digital technology for progressions in his work. “Digital tools have come so far that I essentially view my mouse and pen tool in Illustrator as an extension of my hand,” he says. “In fact, I can draw more accurately in illustrator than with a pencil.”

“Middle management is the kryptonite of excellence.”

Using these digital tools, Cantrell has designed for some of the biggest brands in the country, including Nike, Bacardi and a number of popular magazines, just to name a few. Despite the raised stakes of working with a high-level client, Cantrell doesn’t feel any added pressure, but is wary of the obstacles presented by working with larger companies. “I know my process and trust my judgment,” he says. “With larger brand recognition typically comes more committees and voices weighing in on the final creative thought, and this presents more obstacles along the road of excellence. The more voices that weigh in, the more you play to the masses, which can often yield less-than-desirable results.”

Working with a variety of clientele, Cantrell says he is most drawn to working on projects that fall into two categories: “ones that pay the bills and ones that appreciate excellence.” He notes that he is fortunate to be in a position in which the majority of the work he takes on is in the pursuit of excellence while also being profitable. “Hotels and distilleries, especially ones that are privately owned, typically care more about quality and view it as indispensable to their longevity,” Cantrell adds. “Privately owned companies also have less levels of bureaucracy. Middle management is the kryptonite of excellence. I view excellence in my work the same way: essential to my longevity.”

It’s in the pursuit of excellence that Cantrell won the prestigious Art Directors Club Young Guns award in 2012 after leaving a design studio in Salt Lake City, where he says he acquired experience and knowledge of the industry. “Unfortunately, we just didn’t have the type of work that interested me,” he says. “Hence, I first began lettering as a side project in 2013 as a creative outlet to fill the void I was feeling.”

“A good system functions without the viewer considering what makes it work, like a good machine.”

Leaving his previous agency proved to be risky while he had two kids at home and a wife who was seven months pregnant. It seems that the risk paid off, however. Among receiving other honors, last year, Cantrell became a Type Directors Club Ascender, an award recognizing contributions to typography under the age of 35.

“Type design is system-based while lettering is illustration,” Cantrell says. “It’s harder to understand and appreciate systems. A good system functions without the viewer considering what makes it work, like a good machine.” Cantrell approaches branding in a type-centric way, meaning that he sees a great beauty and humanity in the illustrative work he produces.

Much of Cantrell’s work is defined by gilded letters and an art-deco style fit for the Prohibition era. Specifically, his work for distillery Tom’s Town uses gold as the predominant color for multiple components of the branding and the kind of bold line-work that is essential to 1920s architecture.

“Type as art, or [work that is] more illustration-based, is something that can grab your attention without such knowledge or utility,” he says. “Interestingly, you can still appreciate beauty without understanding a specific medium, but usually, it takes originality or exceptional craft to instill a similar sense of awe. Illustration also humanizes the system. It personifies the mundane and inanimate. It’s like looking at an instruction manual versus reading a novel; you read one out of necessity, the other out of joy. Lettering and typography as an art form yields joy.”

From this joy, Cantrell hopes to forge more good fortune, hoping to do something more dimensional in stone or metal, or work more in music (“A deluxe vinyl album for U2 would be a dream,” he says).

Kevin Cantrell Studios can be found at kevincantrell.com.

Tangible Art: Hint Creative
The Art of the Side Hustle with Two Adobe Designers: Alan Peck