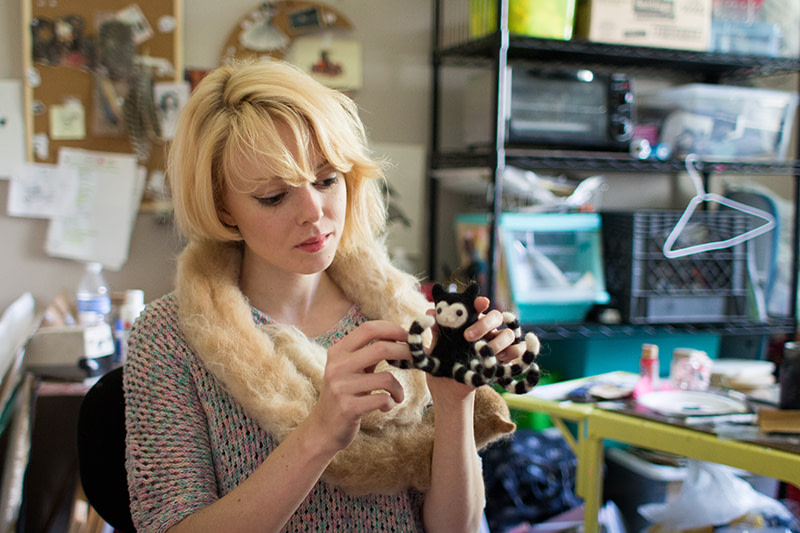 Stacie Van Arsdale has created art—and stories—since elementary school. “I would bring materials from home and make these little pompom people,” she says. “I’d build a house for their sitcom lives.”

Since then, the Davis County–based Van Arsdale has taken her wild imagination to run her Etsy shop, Little Teeth Marks, teach children’s art classes at Bountiful’s Joy Foundation, and participate in Craft Lake City’s DIY Festival, where she introduced us to a three-foot-long furry, horned, four-pony-legged “land narwhal.” “Making these animals is a painstaking process of poking raw wool with a barbed needle,” says Van Arsdale. “It becomes a tangled mess, and somehow, you create the details—it’s a chaos that you push together.”

Van Arsdale takes the constant stream of stories running through her head and channels them toward what she affectionately calls her “weird creations.” Her signature works are darling felted animal miniatures, which remind of Fantastic Mr. Fox—this is fitting, too, since Van Arsdale cites children’s literary favorites Roald Dahl and Shel Silverstein as inspirations. The animals are charming, dressed dashingly in dainty bow ties, scarves and headpieces—but they’ve got a hint of the macabre, too, when we remember their real-life taxidermy counterparts.

“I love seeing how people react to the finished products,” says Van Arsdale, playing with a small “catapus” doll whose little, pointy-eared head extends into eight striped octopus arms. She also pulls out a fawn-colored “cat snake”—a long, winding feline made of three types of fur and meant to be worn as a scarf. A wire in the cat’s head (which didn’t have eyes yet) gives the piece a life of its own. “When I make functional works, I aim to do it in an unexpected way that feels true to myself,” says Van Arsdale.

For this year’s festival, Van Arsdale will share a booth with her sister, Kirsten Moore, who makes planters out of plastic dinosaurs. Van Arsdale has several delightful ideas that she’ll exhibit, including hair arrows, full-body animals in vintage doll clothing (“Maybe there’ll be a platypus dressed like Ken!”), stickers and T-shirts touting her illustrations, and possibly some porcelain dolls. “I love getting to see these things exist,” says Van Arsdale, modeling her cat scarf and patting it on the head. “Mostly, it’s just me wishing I had a cat to wrap around my neck right now, and making that happen.”