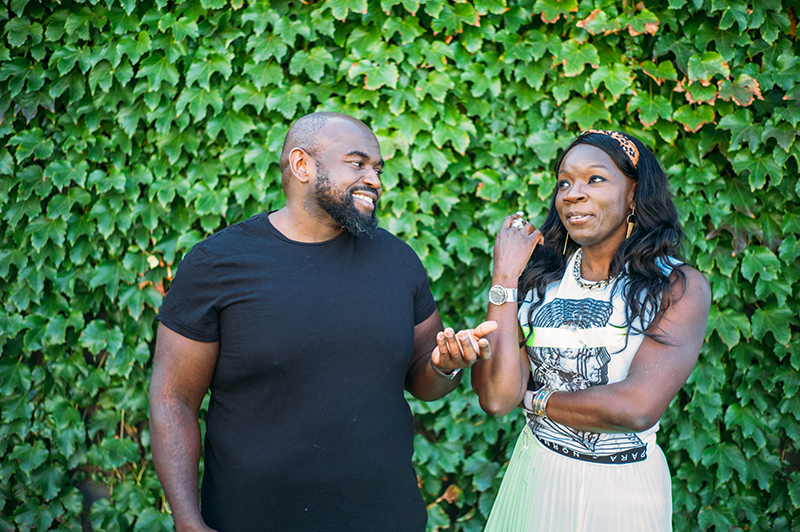 Method to the Madness: Camille and Spencer Nugent

Siblings Camille and Spencer Nugent have cultivated niches here in northern Utah working in the local design scene. Camille is a Senior Designer at Dinng, and Spencer founded IDSKETCHING.COM and Sketch-A-Day.com, and works in industrial design. Jointly, they’ve done work for companies like Nike, Adidas and Motorola. They have nearly 40 years of combined experience. However, it’s only more recently that they’ve taken the opportunity to work together.

After a Creative Mornings presentation about symmetry, they recently participated in the  Misplaced Showcase. At Misplaced, they explored what it means to combine their skill sets. They had identified that a crux of their relationship was deep, meaningful conversations they’ve had in kitchens. “It started with us wanting to find a variety of cabinets on thrift sites and put something together,” Spencer says. “We came up with this idea of a three-dimensional collage of sorts, and that idea evolved as we got ready for the presentation.” Playing off of each other’s strengths, they “came up with the piece that I feel we’re both super proud of and really was a hit at the show,” he says.

They’ve both always known how talented one another are, but lately, they’ve had to learn how differently they each work. “I feel like I have a ton to learn from him,” Camille says. “[He’s] the method and I’m the madness in the conversations we’ve been having lately—it cracks me up.” Despite being siblings, it seems as though their work strategies couldn’t contrast more.

“Turns out I sucked at drawing and had to work really hard, but my passion and drive resulted in me being pretty good at it.”

Having grown up three years apart, they each had their own journey in developing their interests. Initially, they both found inspiration in the illustrations of cartoons and comic books, but when it came time for college, their paths diverged by quite a degree. Camille had wanted to go into BYU’s fashion program, but “it was phased out the year of my application,” she says. “I went with my second love at the time and studied for my BFA in drawing and painting.” Camille achieved success in a different field, a testament to her ability to adapt to varying situations.

Spencer started his education on the more left-brain side of things by studying math. Soon after entering the study, however, he found that he wasn’t able to express his thoughts and ideas as much as we wanted to. “I then quickly realized that was a mistake and discovered industrial design through a friend who was studying at BYU at the time,” he says. “Turns out I sucked at drawing and had to work really hard, but my passion and drive resulted in me being pretty good at it.”

Their career paths have always been about maintaining a level of passion and drive while not allowing what might be ahead to overwhelm them. “I heaped expectations on myself that weren’t the kindest or gentlest, but pushed me to excel at my craft,” says Spencer. “[However,] there were times in my career, as well, that having an expectation of greatness or comparing myself to others really put me in a bad place.”

“I heaped expectations on myself that weren’t the kindest or gentlest, but pushed me to excel at my craft.”

The balance lies somewhere between expectation and nonchalance, making the most of what comes down life’s path. “I still have residual shyness sometimes, but I try my best to push past it because I don’t want to live with many regrets,” Camille says.

In their careers today, they are finding more expression for themselves than ever. “I just left corporate life after five years of learning and growing,” says Spencer excitedly. “I’ll be focusing on my new venture, 50/50 Creative Labs. Inherent to the name is my vision for how I do my best work. I’ll be making time to create art and design projects that come from a soulful place while making space for client work as well.” His new venture will take on projects from multiple new clients while staying true to his art and craft. He says, “During my career, I’ve dabbled in interior design, furniture design, user experience, user interface and service design. So, what I do now, is all of that in the form of tackling whatever tough problems or needs my clients have using my skill set.”

It’s a nice place to be in, with his opportunity to use his expression not only to bolster his career but to continue his enthusiasm in his work. Camille is finding a similar opportunity herself as she is able to return to her educational foundation in painting. “Earlier this year, I worked with the diversity and inclusion team at Adobe and curated a small art show as part of a Juneteenth celebration, for which I did a new painting,” she says. Having to usually work on a digital medium, it’s compelling for her to return to using her brushes and oils.

It seems that no matter what they specifically do with their careers, the most important part of their work is expression. “I fundamentally believe that we do our best work when we can tap into our love within,” says Spencer. “I also believe that when we create space for our own soulful work, the work we do for others is that much better.”

Be on the lookout for work through Spencer’s 50/50 Creative Labs, which will be launching a website (5050.design) before the end of this year. In the near future, Camille hopes to exhibit art galleries of her oil paintings, large-scale mixed media and digital collages. They’re special ventures that not only show the years and experience of their work but also the expression they’ve maintained through it all.