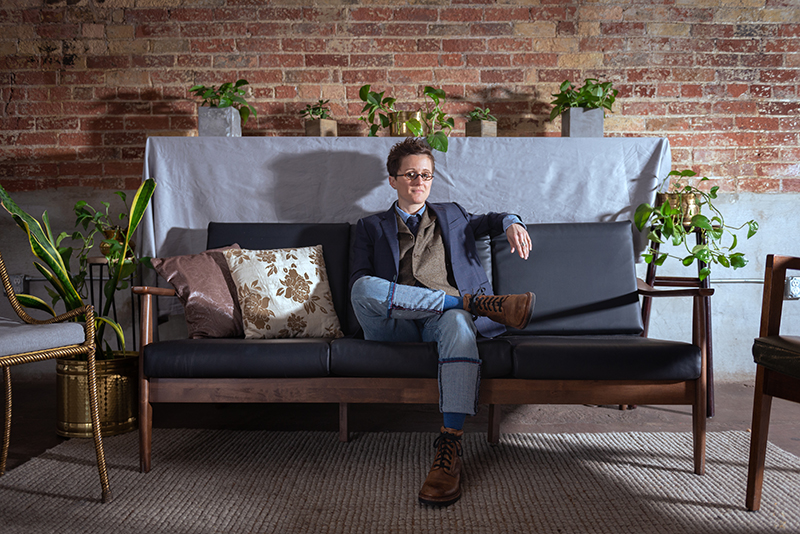 Designer, illustrator and author Nicole LaRue embodies her art. Wearing a grey wool blazer, laced, vintage-style leather boots and clear acrylic spectacles during our interview, notions of charming playfulness and a touch of ferocity are embedded in LaRue’s work and persona. LaRue joins me in the early fall air to explore how she landed locally and the breadth of her creative career thus far, from work for various publications to the powerful imagery of the Women’s March on Washington.

LaRue had recently returned to Utah after numerous meanderings, both domestically and abroad. “I had traveled to South Korea and Japan for about five years,” she says. “While living in Portland, I decided I wanted a community again. I went to a trade show in New York where I met the Creative Director of Gibbs Smith Publisher,” organization whose art director she later became. “I moved across the country from New Hampshire back to Utah two months later. I’m happy to be back … I have a really nice community here—everything that is going on in Salt Lake makes me really excited.”

LaRue’s return to Utah is a bit of a gift to our growing creative community. Her portfolio spans several publications, promotional designs and branding for a cornucopia of companies, including Chronicle Books, Oxford University Press, Madison Park Greetings, Johnson & Johnson, Chatbooks, Tiny Prints, DC Shoes, American Eagle and beyond.

“I have a really nice community here—everything that is going on in Salt Lake makes me really excited.”

Arguably one of LaRue’s most impactful designs came alive with the Washington Women’s March. As part of the identity of a historical event in activism, LaRue’s images for the event were simple yet powerfully representative. “I went to BYU Idaho, and when I was there, a friend and I were together,” LaRue says. “She was the crafty person, and I was the big-ideas person. Her name is Amy Stelhorn; she became the founder of design studio Big Monocle. She was at the Women’s March in San Francisco, and she called me because the Vice President of Global Marketing for Intel decided it was going to be a big thing and ultimately brought Big Monocle and Amy on board, who brought me in.”

This imagery needed to come quickly once LaRue came aboard, driven by the visual challenge of honoring the diversity of identities comprising “womanhood.” “Let’s try to encompass all women—good luck with that,” LaRue says, acknowledging the challenge with a laugh of hindsighted humor. LaRue’s final product was a simple layered profile of three ostensibly femme-identified faces of different composition with a concise and bold statement: “I March On Washington.” Though there was some pushback, “It was to unite people, and I think it did its job,” she says, reflecting on the impact the image ultimately made in representing a historical moment in modern activism.

“I was definitely an introvert [In Japan] … I had to find ways to laugh at myself and stay silly.”

LaRue’s design aesthetic reflects several key aspects of personality and worldview. “As an illustrator, I design funky, quirky, cute crap,” she says. “I like little things and happy things, and that comes out.” However charming and playful her artistic ethos may be, LaRue’s work and overall lens isn’t merely that. This becomes clear as she speaks to her most recent projects, saying, “I just finished two books for Gibbs Smith. One is called Small & Mighty; it’s about kids being activists. The other is called Girl Almighty, about finding your power. They come out in March—I just finished them a week ago! It’s all illustrated and about going out, doing rad shit and being a badass. That’s my vocabulary.”

One of LaRue’s especially relevant products is the Find Your Adventure Journal, a fully illustrated tome on seeking resilience and fun in any of life’s journeys. “It was inspired by the time I was in Japan. I had no idea what I was doing, and every day, I had to try something new,” she says. “I was definitely an introvert there … I had to find ways to laugh at myself and stay silly.”

From there, we ponder both the notion that design and illustration can have an impact on the world, and that LaRue’s continued exposure to the feedback that her work leaves an important mark. “I used to look down on what I did, thinking it doesn’t help anyone,” she says. “To hear responses about the journal and Women’s March poster [saying] it does have an impact is super rewarding.”

“As an illustrator, I design funky, quirky, cute crap.”

LaRue excitedly details the coming treasures on the horizon alongside the two aforementioned books: “With my company, we are coming out with a gift line called Spumoni,” she says. “We have this giant collection that I designed most of. We are going to launch that in spring as well!”

Further, LaRue daydreams about her fantasy project or collaboration. “My dream is definitely my graphic novel, Food Fight,” she says. “It sounds funny, but it’s actually serious; it’s about eating disorders. I’ve been working on it for most of my lifetime. It’s something I want to make happen in my lifetime. I just need to find the right home for it.” LaRue divulges nearly nothing more about this project, yet beams as she refers to it. As more imminent projects come, she bubbles about one of the next big design projects on the near horizon. “I’m designing two decks of playing cards—I get to do all of the face designs. It’s so rad!”

Nicole LaRue’s work can be found and purchased online at smallmadegoods.com. She can be followed with fittingly playful curiosity @smallmadegoods. Also visit publishing company gibbs-smith.com, where she remains the current Art Director.