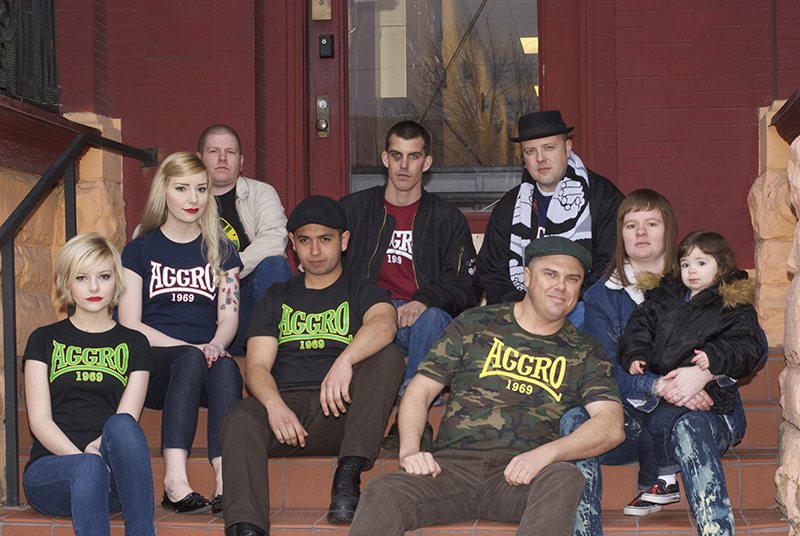 This Saturday, Dec. 17, Aggro 1969 will set up a pop-up shop at Velo City Bags (341 W. Pierpont). Amy Greer runs Aggro 1969, which is known for selling Warrior Clothing England, Alpha Industries and their own Aggro 1969, brands inspired by mod and reggae subculture. Velo City Bags’ Nate Larsen invited Greer to set up shop—just in time for the holidays. Admittingly, Greer doesn’t do pop-ups very often, since Aggro 1969 usually attracts a particular, subculture-minded clientele. However, Greer says, “It’s a good time of year to do business.”

For Greer, selling clothing and putting on events is a way of keeping the mod/reggae subculture alive. “The business was just wanting to contribute in some way positively,” she says, “to have a way of giving back.” Greer has been into the subculture since before the internet and has an appreciation for punk, but reggae is where her heart is. “I got into all of that stuff as a young person, like most people do,” says Greer. “As a young person, I got into punk and stuff first, then I started listening to ska and reggae when I was about 15.” After being introduced to ska via friends, brother’s band in Los Angeles, she was hooked and to this day still maintains an affinity for Prince Buster, Ken Parker, Alton Ellis, Phyllis Dillon and Toots and Maytals.

Greer has been selling her Aggro 1969 brand T-shirts since 2002. In 2003, she opened a shop called London Calling in California. “I had a store from 2003 to 2006 where we sold the T-shirts,” she says. “We sold band T-shirts, we sold music, shoes, used clothing … a little bit of everything,” Greer says. “In the beginning, we started off with a design that we still make, designed by my friend Nick, who lives down in Springville. It’s a lion with cross hammers behind it—kind of like a working-class, soccer-hooligan kind of shirt.” The design could also be found on soccer jerseys. London Calling didn’t quite boast an online presence, as this was before retailers really began moving their operations toward the internet. Also, some of the brands, like Fred Perry, had very specific guidelines on how to sell their product—which included not selling them online. Unfortunately, London Calling closed in 2006. In, 2007 Greer married and moved to Utah. Greer says, “Later in that winter, I decided I was going to start making more T-shirts and concentrate on my own brand, as well as sell the Warrior [Clothing England] stuff.”

In Utah, Greer got a website for Aggro 1969 up and running. She continues to sell Warrior’s clothing, but removed Fred Perry from her retail stock. Greer has maintained a strong relationship with Warriors Clothing. “When I first opened my shop is when I first started selling their stuff, which was in 2003,” says Greer. “So, we just contacted them and did wholesale business with them. Then I became friends with the owner over time. I was one of the first customers in the U.S. to do wholesale.” Greer’s friendship with Warrior Clothing would be strengthened through meeting the owner at scooter rallies in Las Vegas.

Through scooter rallies, Greer also met Larsen. In Utah, both have been instrumental in setting up the scooter rallies here Salt Lake City—which attracts mods and traditional skinheads (aka those into reggae, not the racist boneheads that populate the news). Larsen set up the Last Days of Summer rallies, and over the last several years, Greer has been putting on the Mountain Meadow Mayhem rallies. Scooter rallies have been a great way to bring the community together over years. Greer’s Mountain Meadow Mayhem rallies include camping and rallying at a venue to hear bands play and DJs spin reggae, soul and mod records. The scene here is smaller and tighter knit, compared to that of California’s—it’s quite easy to know someone from almost a one degree of separation. Greer says, “Hopefully people who are trying to do things and make things happen will help to grow it.”

At the Velo City pop-up shop, customers will be able to find a cool variety of clothing from Aggro 1969. “I’m going to be bringing all the Warriors stuff that I have, “says Greer. “I’ve got quite a few Harringtons, several colors and sizes … I’ve got a lot of button-down shirts. They’re really nice, and they’ve got that vintage, ’60s plaid look.” Aggro 1969 will also be selling some accessories, like their name-brand shirts, as well as socks, suspenders, patches, enamel badges and even scooter underwear. There will also be vegan jam for sale. The prices range a bit: Harrington jackets are about $60, while button-down shirts are around $50, and T-shirts range from $14 to $18. Other neighboring businesses along Pierpont will be selling items at their own pop-up shops. The Aggro 1969 Pop-up Shop starts at 12 p.m. and goes until 6 p.m., so be sure to stop by Velo City. For more information, visit the Facebook event, and find Aggro 1969 online at aggro1969.com.