SLUG Mag Soundwaves
Episode #395 – Cotes
00:00 / 18:06
Spotify Stitcher
RSS Feed
Share
Link
Embed
Stephen Brown Dance Company has operated outside contemporary norms for 15 years, breaking down expectations and throwing in theatrics to keep audiences on their toes. By offering an interesting combination of modern dance and performance art, SB Dance brings in an almost otherworldly quality to each of their shows. SLUG sat down with the founder and director of SB Dance, Stephen Brown, to discuss his latest production, Of Meat & Marrow. 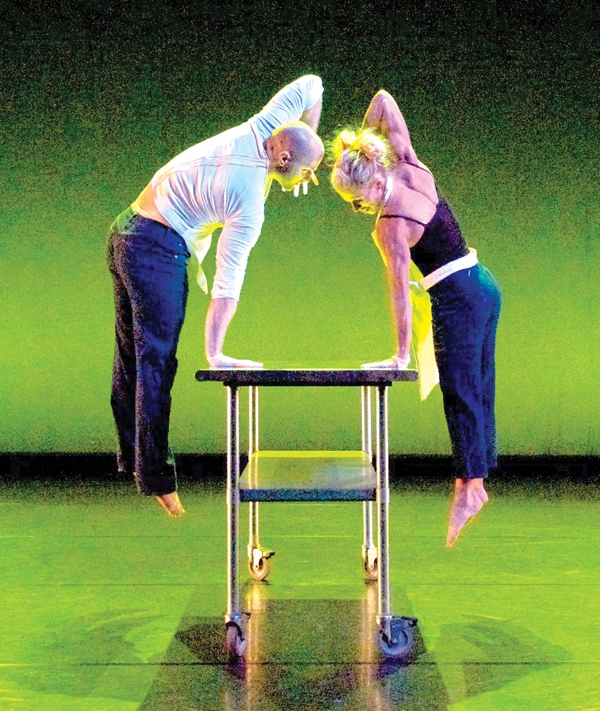 SLUG: What sets SB Dance apart in the realm of modern dance?
Brown: I think one thing that sets us apart is we don’t really do modern dance. Although it’s movement based, what we do is not easily categorized … It’s certainly not what most people think of when they think about modern dance. What we do is theater, dance, movement-based stuff, a little circus, some work with actors––there’s not a good category for this, but probably in ten or fifteen years, they’ll call it something like performance multimedia. I’m probably more of a new generation—whom you see in all the art forms. I write, I do things with movement, I hang stuff, I do things with props, I work in theater, I work a lot with audience engagement, and so it’s kind of big, multimedia [work].

SLUG: Earlier this year, you had the BEaST of SB Dance, and in December, you had WTF! Tell us about those and how they were received.
Brown: Both were received very well. SB Dance has a bunch of new board members and is really a recharged organization, and part of our renaissance here was to put together a real season of events, so those are now annual events. We do WTF! (which stands for Wine, Theater, Food) the first Saturday in December at the Rose [Wagner]. That was the best party/fundraiser. I call it the fund-rager. We did parts of our show on the dance floor … right next to people. The BEaST of SB Dance happens in January, the second weekend of Sundance. It’s a showcase where I take highlights of stuff I’m working on, or stuff I just did, or just pull stuff out of the closet and slam it together. It’s 10, five-minute pieces, so it’s fast, it’s furious. I want my shows to be like parties: I want people to be rocking in the show.

SLUG: What can we expect to see from your latest production, Of Meat & Marrow?
Brown: I was fooling around with some things at the BEaST of SB Dance in January, and I liked them. Of Meat & Marrow is sort of a morbid look at our bodies and dying and the afterlife and coming back. It’s morbidly funny, I should say, because I try not to do anything seriously, or at least not too seriously.

SLUG: One of the promotional lines for Of Meat & Marrow, “a ballet about parts,” suggests a bit of a sexual atmosphere for the show, but the bloodstained meat hook in the promotional ads creates a sense of darkness and death. What provocative themes and motifs can we expect from this show?
Brown: [Darkness and death?] Or S&M? Yes, I think that’s why that hook is there. We’re talking about bodies like they are pieces of meat. It goes back to a Marcus Aurelius quote about us being little souls carrying around these corpses. As somebody who is interested in movement, that always interested me, as does everything that’s a little taboo.

SLUG: Why do you feel it’s important to examine or explore the roles of gender in your work?
Brown: I think gender issues are important. As they are an important part of our culture, they’re important to be represented in art. I think artists are the ones going out there and saying, “You think things are this way? Well, fuck you, they’re not!” or “We’ll show you a different perspective on it.” There’s less awareness about the importance of [gender issues]. I try to roll that into my work, because you see art … to be changed, to be altered, to get rewired a little bit. I think that’s an important part of our rewiring, to not be so crazy about our sexuality and our gender… and to get over those assumptions.

Of Meat & Marrow will be performed in the Leona Wagner Black Box Theatre at the Rose Wagner Performing Arts Center on June 8, 9, 15 and 16 at 8 p.m., and June 17 at 4 p.m. For ticket information, go to arttix.org or sbdance.com.