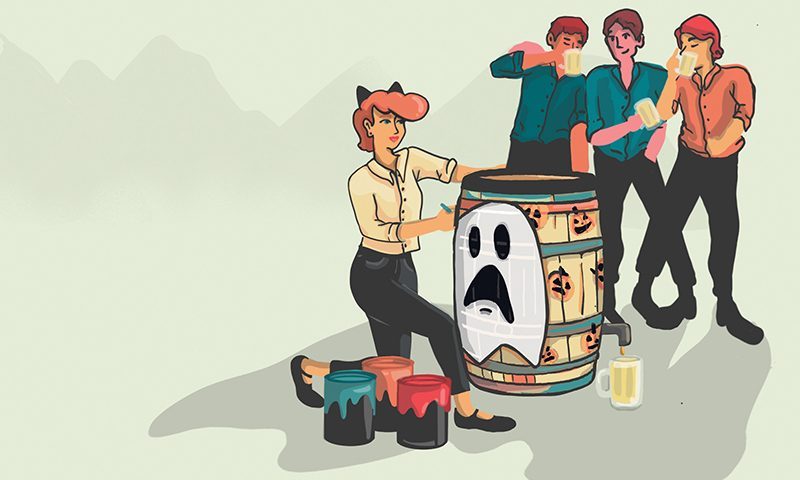 About two years ago, distillers and brewers were given more freedoms within zoning laws such as the ones for the Creative Industries Zone. The city abrogated previously strict guidelines like how many barrels of beer a brewer can make and how much a distiller can distill. Naturally, as zoning laws become more flexible, the area became more appealing to local brewers and distillers, bringing them to establish their businesses in this zone. Currently, the CIZ is home to six of SLC’s thriving breweries and distilleries: Level Crossing, Saltfire Brewing, Shades Brewing, Sugarhouse Distillery, Beehive Distilling and Dented Brick Distilling.

Within the intention and vision behind the Creative Industries Zone, having all of these brewers and distillers reside within the area accomplishes a major part of the plan. “As we were working on the cultural district planning for South Salt Lake, one of the things that was very apparent to us is that the city had virtually no public art in it,” says SSL Arts Council Board Member Derek Dyer, who is also the Utah Arts Alliance Director.

“I would define community art as a part of a community that has had involvement, input or direct participation in creating.”

This realization was the catalyst for the Mural Fest project that went underway last year. Dyer says, “[Mural Fest] would allow us to create 10 public-art murals a year and dramatically transform the city. The vision is that over 10 years, we would have commissioned at least 100 murals, making this area in SSL one of the mural centers of the world and creating dynamic change in that community.”

This project brought together artists like Elaina Court, Evan Jedd Memmott, Trent Call and many more to add artwork to local businesses and our city. “Mural Fest is all about matching business owners,” says Sharen Hauri, City of South Salt Lake Urban Design Director. “Since they are now in the area, they can help them create their brand and add murals. They look inviting, and the artists and the arts council have helped get some identity to the neighborhood.“ This year, breweries Level Crossing Brewing participated in Mural Fest and was bestowed with a mural by artist Arcy, along with combining Shades Brewing with artist Chuck Landvatter, Salt Fire Brewing Co. with artist Dan Toro, and Call with Beehive Distilling.

As Mural Fest has proven to be successful in the last two years, artists and brewers/distillers anticipate fall while the annual Craftoberfest approaches. “[The second Craftoberfest] is on Oct. 5. All of the breweries and distilleries in South Salt Lake will be participating, and there will also be art elements involved in that event as well. We encourage everyone to come out and celebrate the creative industries and the local brewery-and-distillery scene in South Salt Lake,” says Dyer. This festival is another successful effort to bring together visual artists and the spirit and beer creators into a win-win collaboration.

“[Mural Fest] would allow us to create 10 public-art murals a year and dramatically transform the city.”

Craftoberfest celebrates the brewers and distillers in the Creative Industries Zone along with the unveiling of the Barrel and Keg Art Project, where local artists paint one barrel for each distillery and brewery to display in their business. While every artist is compensated for their work, breweries and distilleries walk away with a beautiful piece of artwork to amplify the “vibe” within their business, hopefully attracting more customers.

“I would define community art as a part of a community that has had involvement, input or direct participation in creating,” says Dyer. This definition is clearly executed through both Mural Fest and Craftoberfest, along with their third community-art project, the Robot Mailboxes, created by local artist Fred Conlan, in which he recycles metal scraps to turn mailboxes into robot characters. Dyer says, “I think the South Salt Lake Arts Council has done a great job of connecting with community on creating several community art pieces at many of the community centers around the city, as well as making sure that there is at least one mural project that is a community-based mural as part of Mural Fest each year.”

Whether you take part in the development of the Creative Industries Zone as a creator, an artist, a business owner or a patron, you are part of a larger initiative to nourish the success of our own neighbors and ultimately the success of our community as a self-supporting economy. Support this dream by visiting Craftoberfest on Oct. 5 or stopping by any of these brewers’ or distillers’ locations to see their craft firsthand and the work of many local artists! You can learn more about the Creative Industries Zone initiative at sslarts.org/sslcreativeindustrieszone.

Editor’s Note: This article has been updated “Chad Landvatter” to the correct name “Chuck Landvatter.”