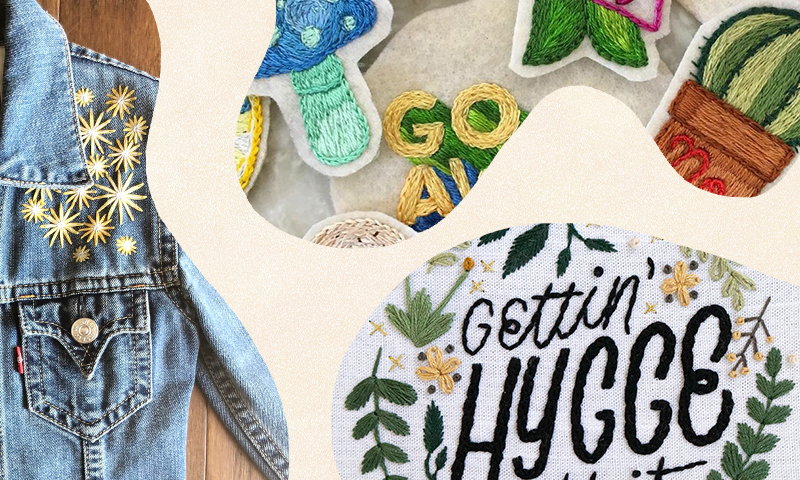 Stitching the “Common Thread” with Danielle Susi and Kassie Scribner

Artists Kassie Scribner and Danielle Susi both have memories of their childhood going hand-in-hand with embroidery. They learned early that embroidery is not just a craft, but a form of art. Scribner’s grandmother taught her the basics of embroidery at a young age. However, she didn’t start using these skills until about four years ago. From the first time she picked up her needle and stitched her lettering, she was hooked. Similarly, Susi’s mother was the one who taught her crocheting, knitting and sewing. Susi went to grad school at the School of the Art Institute of Chicago and says that, “It’s where I learned advanced techniques and really fell in love with the possibilities of the art form.” These two creative minds were craving something that would bring the local embroidery community together and to share their skills through their needles—together, they created the Common Thread Retreat.

The Common Thread Retreat is an all-day embroidery retreat and will take place in Salt Lake City on Sept. 15. The retreat’s goal is to create a space for the embroidery community in Utah. The retreat will not only appeal to master needleworkers but to artists of all skill levels. The retreat will include three hands-on workshops, hors d’oeuvres and delightful conversation. “All of our instructors are local to Utah,” says Susi. “So we believe this is not only a fun and special way to celebrate embroidery, but it also celebrates local talent and the amazing embroidery scene we have in Utah.”

“If we start locally and that respect is earned here, it can expand outside as well.”

Susi eventually came to Scribner with a little seed of an idea. Susi had initially thought of a multi-day retreat, then came to Scribner with the pitch. The next step for the two co-founders was to set off on a journey of costs and logistics. Ultimately, they settled on a one-day retreat. “It’s rare [that] there are intermediate styles of workshops, so putting together a full day of workshops that everyone can learn from sounded fantastic,” says Scribner.

“In the last few years, the embroidery scene has started to explode and I absolutely love it.”

The venue for this event is in the upper avenues of Salt Lake City with a gorgeous outlook over the city. After the first workshop, led by Jennifer Riggs, there will be a delicious catered lunch followed by Scribner’s workshop. Snacks and drinks will be provided throughout the day, and the retreat end with a cocktail and mocktail mixer after Sarah Beth Timmons’ workshop. During the mixer, attendees will have a chance to network and brainstorm with fellow artists and workshop leaders. An event like the Common Thread has never been done before for the embroidery community in Utah. It’s no doubt that both Susi and Scribner have big hopes for this inaugural embroidery retreat.

Scribner will be demonstrating her embroidery style of choice: lettering.  “I’m going to be teaching some letterform styles that I often use when stitching, giving tips and tricks for [the] best ways to add type elements to your hoops, which stitches work best for letterforms and how to execute them, all while stitching a lettering-based pattern!” Scribner says. Riggs will be leading a workshop on embroidered clothing where attendees will learn how to turn a regular piece of clothing into something special. Timmons’ worksop will be delving into embroidered patches and shading. In this workshop, expect to learn Timmons’ technique of shading that’s perfect for any patch.

“We believe this is not only a fun and special way to celebrate embroidery, but it also celebrates local talent and the amazing embroidery scene we have in Utah.”

Embroidery is mostly considered a craft with the general population, not an art. Those who may not know what embroidery entails would surely be ignorant to how truly intensive it is—both mentally and timely. “If we start locally and that respect is earned here, it can expand outside as well,” says Scribner. Those who are familiar with embroidery can attend the Common Thread and see how embroidery influences the lives of Scribner, Susi, Riggs and Timmons. The attendees will be able to see how fun it is to stitch what you love.

In the future, Susi hopes that Common Thread can become an annual celebration of people making things with their hands, learning new skills and creating friendships and connections among fellow makers. “I hope that we can use feedback from the first retreat to keep growing and making new opportunities for folks who love this art form just as much as Kassie and myself do,” she says. The Common Thread Retreat takes place on Sunday, Sept. 15 at 490 E 16th Ave in Salt Lake City. Tickets are $175 per attendee, and can be purchased on Eventbrite.

The Art of the Side Hustle with Two Adobe Designers: Kassie Scribner
Lillie Jayne: CLC Artisan