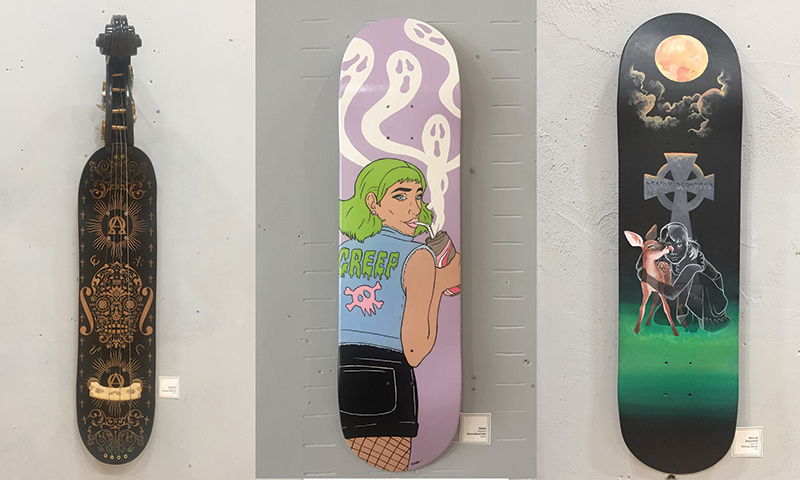 Outsiders are often tempted to regard Salt Lake City as a place of prudence—rightfully so, considering the heavy religious influence and right-wing dominated politics. But with every newcomer ready to add to the city’s unique flavor, we see more growth. Swanky new restaurants and bars are continuing to pop up. With so many equality flags being flown, not only are we experiencing more diversity in general, but we’re also seeing that diversity trickle into our summer festivals. The Urban Arts Festival, might not be the biggest or longest-running Downtown festival, but what it is doing is successfully defining the Salt Lake City art scene through its flagship (and  now annual) event—the Skate Deck Challenge.

Nine years ago, the Skate Deck Challenge was serendipitously born out of need. Derek Dyer, Executive Director of the Utah Arts Alliance, was working with Tamara Fox, of the former Gray Wall Gallery, with hopes of showcasing a new art space on Pierpont Avenue. Fox wanted to create an event that put the Gray Wall Gallery on the map. Being that skaters and city dwellers often go hand in hand, Fox decided to invite the community to participate in a night of skate-deck painting. “They loved the versatility of the idea and the funky, urban style that the painted decks evoked,” says Scott Tuckfield, current Urban Arts Gallery Manager. To further the vibe of that night, Fox called in food vendors, musicians and noted local artists to display pieces. “What began as a simple reception to host a skate-deck-painting event turned into what is now the Urban Arts Festival and, consequently, the Urban Arts Gallery,” says Tuckfield.

“What began as a simple reception to host a skate-deck-painting event turned into what is now the Urban Arts Festival.”

The festival has grown enormously since its humble beginnings on Pierpont, and it now features all types of artists using all types of mediums. However, the Skate Deck Challenge still reigns as the premier event, and festival directors like to see which budding artists will participate. To showcase the winners and artists of the festival, Dyer decided it would be a good idea to open the Urban Arts Gallery, which displays work year-round to the public.

“You can get your own deck, or we’ll provide you with one to paint. The goal is to engage the community and local creatives, even if they aren’t operating on a professional level,” says Tuckfield. “Last year, 100 decks were submitted from 85 artists. The public votes on the winners, but if there are artists that stick out, the festival directors will award them, too. We don’t turn any submissions down unless they are extremely vulgar.”

In addition to being the Urban Arts Gallery Manager, Tuckfield is also a full-time artist and has entered the Skate Deck Challenge for the past three years. “I’d describe my work as ‘visionary art’ with surreal, psychedelic, and spiritual themes,” says Tuckfield. Tuckfield’s style is just one of many you’ll see painted on these decks. Other artists include Jenna Louise Rogan, who came to Salt Lake from Denver.

“The Skate Deck Challenge offers a fun opportunity for artists to come together and celebrate their diverse styles.”

“Last year was my first Skate Deck Challenge competition, and it was actually the first time I had ever displayed my work in an art gallery,” says Rogan. “I had already painted a few decks and decided to give this competition a go. I’m so grateful I did because participating gave me confidence to seek out more opportunities to display and sell my work.”

The Urban Arts Festival’s focus is just that—to get artists painting and on display. But one of the biggest upsides of the event is that it gets the community’s conversation about art and “what art is” to change.

“The Skate Deck Challenge offers a fun opportunity for artists to come together and celebrate their diverse styles,” says Tuckfield. “I’ve seen this event make a deep impact on these artists’ lives. Even more, I think it makes art something that is relevant and accessible to people from all walks of life. There are so many styles that come in that practically anybody can find something that appeals to their tastes. This is an art exhibit for everyone.”

A myth about art is that it’s only for those who have money. In reality, art is one of the only mediums throughout civilization—from Mesopotamia until now—that has been used to teach and explain the nuances of society to everyone, not just the rich. Before people could read and write, they were looking at art. Art is still like that today. A community’s creation of art can reveal quite a lot about what a culture praises, dislikes and mocks.

“There are so many styles that come in that practically anybody can find something that appeals to their tastes. This is an art exhibit for everyone.”

“As an audience, I think it is important to approach art with respect and an open mind,” says Rogan. “Each piece is an extension of the artist in one way or another, and there is always a story behind what you see. It takes a ton of bravery for an artist to put their heart and soul out there. I also encourage the viewer to look within and try to find a personal connection to the work they are witnessing. By doing this as viewers, we can then build some very meaningful connections with each other.”

Salt Lake City is becoming quite a hotbed for burgeoning artists, and you can see, experience and feel it at the Urban Arts Festival this September. The show is free, so come check out the decks yourself at the Urban Arts Gallery from Sept. 3–29. The gallery stroll reception is on Sept. 20 from 6–9 p.m.