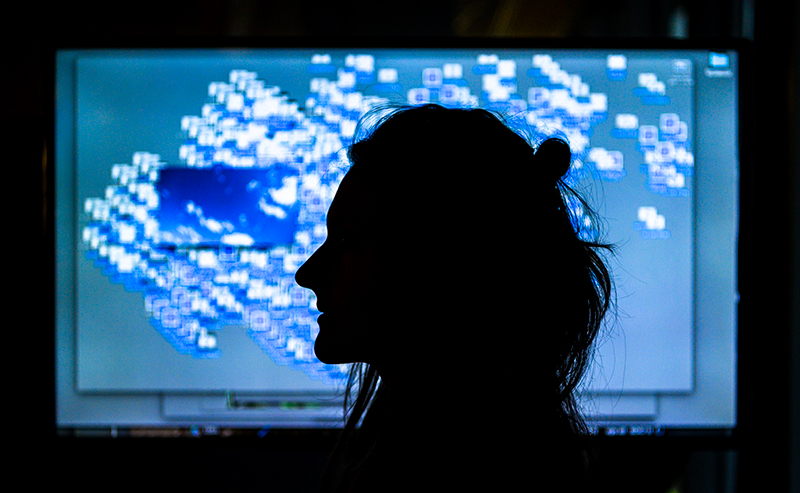 Attempting to bring the unseen to light, artist and environmental humanities master Tiana Birrell is striving to accomplish a challenging goal. A recent graduate and Digital Matters Fellow with the University of Utah, Birrell has spent the last several years researching the intersection between the digital and physical realms. Attempting to highlight the “large environmental footprint” created by data centers and the vast amount of energy required to house the unfathomable amounts of data stored there, Birrell’s latest installation, Finding Place in the Digital, sparks an interesting dialogue between science and art through a multimedia presentation.

Raised in Massachusetts, Birrell always explored the world from her own backyard. Her father was a biologist, her grandmother an artist. Both lent a huge amount of inspiration for her passions as a photographer and anthropologist. “I’ve always been snipping and cutting and pasting and painting … [and] I grew up in a rural part of the state, so being outside was always a huge part of my life,” Birrell says.

Birrell was accepted to the Art Institute of Chicago, where she completed a BFA in both Photography and Anthropology. “When I was doing my BFA, I was making a lot of paintings, and it was really therapeutic and helpful for me understanding myself. It was my way of processing the world,” Birrell says. “But then, I got to a point where I was only thinking about myself. I started thinking about my other interests, and how I could incorporate other things together. So, I picked up another degree in anthropology. I kind of left my BFA not really knowing what I wanted to make art about. But I knew that I wanted my art to be supplemented by something else. I needed to interview and survey and get out of my own bubble.” And get out she did.

Birrel uses her camera as a means of “bringing those invisible structures and infrastructures into visibility.”

After falling into a sort of digital rabbit hole, she began thinking about her photographs and where exactly they were stored. “As a photographer, I need a lot of storage for photos and videos,” Birrell says. “In doing research on the cloud and external hard drives, I learned that the cloud is an actual place in North Carolina. I learned about land management and politics, and permissions for getting access to those spaces and how it affects the local community. And then, I found all these data centers in Utah, and it being a desert and how much cheap electricity and water they get, it started to fuel my art.” Inspired by the romantic ideals portrayed by photographer Alec Soth’s “Sleeping by the Mississippi,” Birrell began combing the mountains and streams of the Uintahs. During her wanderings, she used her camera as a means of “bringing those invisible structures and infrastructures into visibility.”

Her most recent exhibit represents her master’s thesis of “materializing our information.” Inspired by the data centers in Utah, Birrell began researching and photographing the pipes, dams and rivers that all contribute to the cooling of these centers. The camera, Birrell says, was initially just her “companion” in the beginning of the project, used to help viewers visualize the vast data channels. It thus ended up helping her create an entire installation of data and images that incorporates her video art, photography and technical writing into one tangible space for viewers of all ages to learn from.

“I thought that was a very interesting way of talking about the internet, trying to make it feel wild and sublime and touchable and untouchable.”

Water you doing? Finding Place in the Digital, featured at the University of Utah’s Marriott Library, is a beautiful exhibit that combines visual mixed-media art, performance art and a book featuring “100 different words that have an analog and digital component.” To convey incorporeal ideals as reality, Birrell created a collection of icons, each representing a different technological definition used to help her audience connect more with the digital world. “I was thinking of the internet terms and how Apple uses animals and locations for their software and updates,” she says. “I thought that was a very interesting way of talking about the internet, trying to make it feel wild and sublime and touchable and untouchable. They use advertising to perpetuate the way people think about the internet. Although Apple is just one example, they’re a huge company. So, I started thinking about the language used when talking about the internet such as leopard as a cat, and Leopard as an Apple OS update—or viewing a bug as an insect or something used to [monitor] someone.”

Though Birrell is not a native Utahn, it seems she may have found a space here that satisfies both the scientist and the artist within her. She to continue to show her project in and out of Utah [now that she’s completed her schooling]. She hopes to expose others in the same way she exposes architecture and design with her photographs, as seen in her photo series with SLUG. Be sure to check out Tiana Birrell’s exhibit at the Marriott Library, where it will be shown until June 1, or check out her website.

Hirad Sab: Art for an Anarchic Future
Save Your Own Skin