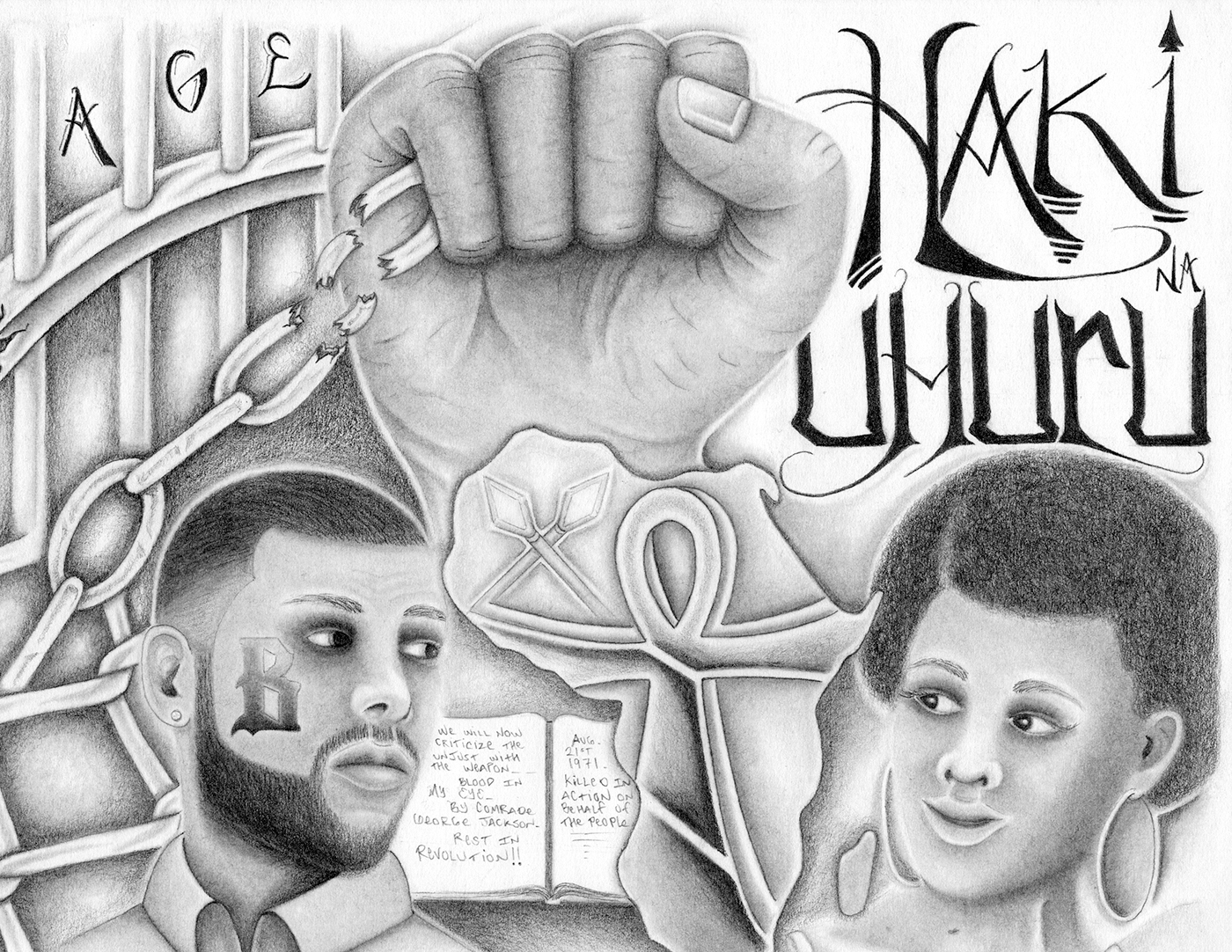 Isiah Vos, aka “Haki,” Growth Towards Justice & Freedom, 2019. Photo courtesy of Art in the Hood.

Salt Lake City has seen a lot of changes over the past few years. There are lots of big, modern places to live, cool restaurants and bars. But do we see our neighbors patronizing these places? Art in the Hood, a new three-month art exhibit that will be housed at Mestizo Coffee House beginning in April, gives a platform to those who may otherwise be ignored by their rapidly gentrifying neighborhoods—and the displacement and frequent incarceration that comes with it.

“We have historically used the location of our homes as a measure of status,” says Billy Palmer, Associate Producer of “RadioACTive” on KRCL, whom Mestizo invited to co-organize and present Art in the Hood. When the bad part of town becomes the good part of town, it doesn’t erase the problems faced by those who have been there the whole time. Gentrification is a contributor to displacement, causing longtime residents of newly revitalized neighborhoods to move out. Even those who aren’t forced out economically face another kind of displacement: incarceration. “Much of what we see in communities with lower incomes are stress, trauma, struggle—a survival mentality,” Palmer says. The voices of those most affected by it are rarely heard.

“This project has given us the opportunity to have a bit more structure and more of a hand in making sure it can be the best it can be.”

Located at 631 W. North Temple, Mestizo is the perfect space to hold Art in the Hood. Speaking with owner David Galvan, I’m struck by the variety of art hanging on the walls as he lists some of the organizations who meet in the space, e.g., Black Lives Matter, Wasatch Community Gardens and PANDOS. It’s a neighborhood coffee shop that cares about its neighbors. “People tell me that we do so much—but we do nothing,” Galvan says. “We just create the space for it, and it organically grows and does its own thing.”

Last year, Mestizo hosted an exhibit from elementary students called Work/Trabajo, a bilingual installation about how the kids perceived the idea of “work.” It was well-received and well-attended by residents of Mestizo’s neighborhood. KRCL’s “RadioACTive“ hosted a live broadcast from the exhibit on its opening night, giving it a wider spotlight. Based on the success of this exhibit and the partnership with KRCL, Art in the Hood was born. “This project has given us the opportunity to have a bit more structure and more of a hand in making sure it can be the best it can be,” Galvan says.

Art in the Hood will consist of artwork focused on three unique themes: “Youth Safety” opening on April 3, “Incarcerated Youth” opening on May 1, and “Incarcerated Adults” opening on June 5. The first month will focus on what a safe community looks like, how communities are policed and how youth are affected by the punitive criminal justice system. The second month will feature art entirely by youth in custody, and the third month hopes to showcase art and writing by adults currently in the system.

“Art in the Hood aims to be a force for positive transformation and something that reacts to the negative impact of displacement in the community.”

The partnership behind Art in the Hood will also host weekly events each Friday of April, including live monthly broadcasts of KRCL’s “RadioACTive,“ movie screenings and open mics. Galvan is especially excited about a panel being put together that will feature a school resource officer, prosecutor and judge, who will each discuss their roles when it comes to youth in custody. Mestizo will also be hosting an expungement clinic in May for youth and in June for adults, where eligible people can get their criminal records cleared. Art in the Hood hopes to be more than just an art exhibit—it aims to be a force for positive transformation and something that reacts to the negative impact of displacement in the community.

For those affected by displacement and, especially, incarceration, there is a freedom in creating art. It allows them a level of control that has otherwise been taken away. “Art is something that allows not only, or hopefully, a cathartic process; it allows us to imagine our lives differently,” Palmer says. “It engages the parts of our brains that humanize and allow for empathy and compassion—that matters a lot if you live in a system that dehumanizes you.”

“We hope this gets people more involved with shaping the communities they live in through being active in the ways they are comfortable with.”

Keith McDonald, host of KRCL’s “Friday Night Fallout” hip-hop show, regularly receives mail from incarcerated people looking to express themselves—or even just make a human connection. “Most people who mail the show want to talk about life in general,” McDonald says. “I get to learn about their musical tastes, families, likes and dislikes, and sometimes what landed them in jail.” Incarceration takes away opportunities for connection, so even the possibility of someone hearing what you have to say can be powerful. “When you are stereotyped, controlled and regulated as much as a prisoner is, being able to express yourself and/or hear expressions from your community can reduce stress, motivate and console you. Art serves as a medium to vent strong feelings that may or may not otherwise be punished.”

Art in the Hood is an art exhibit and a force of community action rolled into one. Not only does it give voice to those whose voice has been taken away, but it asks observers to think about their role in displacement and what they can do to help. “We hope this gets people more involved with shaping the communities they live in through being active in the ways they are comfortable with,” Palmer says. “Anybody regardless of income should be able to afford to live in any part of their city. And communities have the power to shape their neighborhoods and to ask for equitable policies and opportunities.”

Editor’s Note: As of March 13, due to precautions taken to mitigate the spread of COVID-19 Art in the Hood’s April exhibit has been postponed until July 2020. Email artinthehood20@gmail.com for more information.