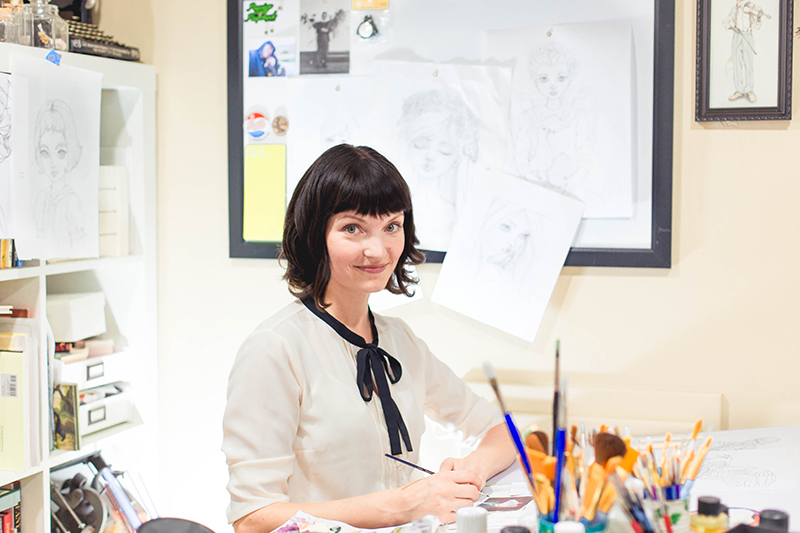 Looking at the illustrations of local artist Candace Jean is a way to transport us to a magical realm where creatures take on human characteristics, where botanical fauna morph into faces or where bugs are crowned as royalty. Her work touches on the creepy and strange, but not in a horrific way: Think gothic classicism with an eccentric quirk, painted with pastel hues—and that only scratches the surface of a style she’s mastered. Take “The Royal Deerbird,” an illustration that shows a centaur-like king (swap the man with a bird, horse with deer) guiding a woman clothed in a dark, Victorian-style dress through a luscious forest with deep shades of green, annotated with the accompanying text: “Often times, a secret forested stroll at dusk with The Royal Deerbird brings solace and the most comforting of advice.” The oversized eyes of the girl and soft hue of the creature give the image a child-like wonder, but it’s done with a twisted maturity that reaches to anyone with an affinity for imagining bizarre worlds with new possibilities. Jean is this month’s SLUG cover artist and a Craft Lake City DIY Festival participant, and her handmade illustrations are like a peering into an elaborate, daydream fantasy.

Drawing from the influences of Mark Ryden—an artist Jean reveals her affinity for—Jean initially stimulated her craft by illustrating peculiar portraits of people in a way that pulls from a Medieval style of stark characters sitting in a Rococo-style chair with a stoic expression, leading the eye to gather emotion from the subtle symbolism found with the objects, colors and shapes harmonizing the face. Instead of coming across as it would in a historical context, though, her take is modern, unorthodox and mysterious. As her website states, her first portrait of a girl named Charlie “was in a completely different style than anything I had done before, but I loved her. She brought out something new in me—a way for me to create stylized portraits.” In this month’s cover art, “Dear Deseret,” the girl holds a beehive and a seagull, evoking not only the pioneer settlers that migrated to Utah in the 1800s, but also the elements of crafting from the home. The woman doesn’t look cute or kitschy, but sits straight with confidence, carrying the power that a handmade piece holds.

Jean has been with Craft Lake City since the DIY Fest’s inception in 2009, and she notes how the festival has given her an impetus to turn her illustrating into more than just a hobby. What started for Jean, commercially, as illustrations on greeting cards a bit prior to her DIY Fest debut has expanded into painting on a new level that she takes seriously. Jean predominantly takes her pencil sketches from notebooks and transfers them to watercolor paper, but she experiments with oils and acrylic paints as well. Her journal and sketching notebooks are an integral part of her process. She says, “A lot of my ideas for stories are written down in my notebook, along with things I learn about plant life or interesting animals, and, of course, ideas for paintings.” Going through those books help to spark ideas that she might not have thought of previously, or “at the very least, some creative energy that can lead to productivity,” she says. The entirety of her process, from sketches in her notebook down to the packaging and business cards, is carefully thought out, and her experience with graphic design gives her a thorough grasp of working with the ways one’s eyes connect to images and text.

Jean has held on to the magic of the childhood wonder of exploring new environments and imagining the personalities that creatures have, and her illustrations tap into a unique nostalgia of classic children’s literature from previous generations. Visiting the studio in her home is like visiting a natural history museum, with specimens ranging from framed butterflies and beetles, glass containers that display uncommon plants and moss, crystals and rocks, bones, vintage books, antique trinkets and fish tanks, all sprinkled with her own pages from sketchbooks and notes. Her fascination with the natural world bleeds into her illustrations, and coupled with an adoration of the Victorian era, her images evoke dimensions of creepy, almost haunting scenes—yet she balances them with a healthy dose of classic beauty. “A lot of people have said that my stuff is like Beatrix Potter meets Edward Gorey, and I like both of those artists, so that’s a huge compliment,” Jean says.

Jean has been drawing since childhood, but she hasn’t had any collegiate training to put on a resume. Not that she needs it—she has a degree in graphic design and demonstrates an acute attention to detail, which gives the impression that this is her career. I was surprised to learn that she works on these projects in her spare time. Having a studio in her home helps, as she can work in it whenever she can find a spare moment, whether it be a few minutes or a few hours. There are two sides of the coin to home studios, though—“I get interrupted because I’m a mom, so that pulls me from my space,” she says. “That’s the hard part: taking myself away from home, because home takes priority, too.” Between juggling a full-time job and raising a kid, she treats her craft as a hobby, for now, with plans to one day focus on creating children’s stories.

Although already a member with the Society of Children’s Book Writers and Illustrators (SCBWI), she is still seeking agents to represent her work, but has already thrown a few book ideas out there to start working on. Not only does Jean hope to illustrate stories, but she wants to write for the stories that go with her images as well. Her first vision is to launch a series of animal portraits in a series called the Gentlemanly Rabbits, accompanied with stories of their various roles in the fictional town they live in together, bound in hardcover cloth. When going through personality traits for some of the characters, Jean says, “I’m attached to one because he likes butterscotch candies, which I find charming. And another: I appreciate his insisting on going into the fish business simply because he loves fish, despite the entire town happening to be made up of vegetarians.” The portraits will be available for sale as originals at the Craft Lake City DIY Fest, and Jean hopes to raise funds through a Kickstarter in the near future for book assembly and production. You can keep up to date with sketches and images of the project, Jean says, by following her Instagram account, @candacejean.

Since Jean first participated in the DIY Fest, local business owners and gallery curators have approached her to feature pieces at galleries, libraries and boutiques, and she’s since had booths at the Renegade Craft Fair in both San Francisco and L.A. Jean gloats about the growth of Craft Lake City and how it not only enhanced work within her own market but also within the community of artists we have here in Salt Lake City: “I love that we all are being exposed to more local artists, and in my chance to walk around [the festival] for a minute, I’ve found artists that I didn’t know were here, and they’re amazing,” Jean says. “That’s what’s fun.”

Jean’s vision is currently expanding to use her artwork as more than a flat, two-dimensional image that you can purchase as an original or print. In previous years, she’s played around with creating necklaces with her art, which she plans to do again this year, but she’s still thinking out of the box. With textile patterns, she’s starting to play with designs for fat quarters, cloth banners and, eventually, notebooks, which, if not ready to release by the time Craft Lake City’s DIY Fest rolls around, will be featured on her Etsy shop (etsy.com/shop/candacejean) shortly thereafter. Keep Jean on your radar, as her work is bound to continue down surprising roads. I, for one, want to befriend the foxes and snakes she’s drawn and invite them over for tea in a woodland escape. To take a stroll down the road to her fairy-tale-like wonders, and to find more information about her upcoming projects, visit her website, candacejean.com.