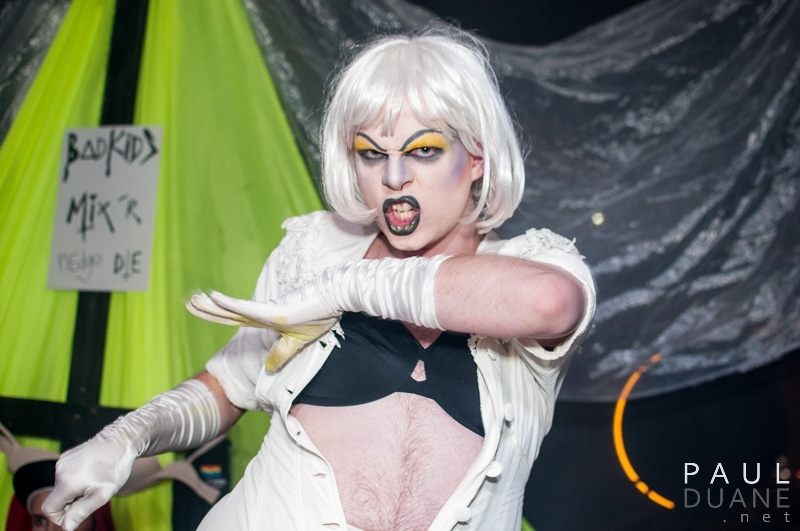 On any given Thursday night at Salt Lake’s Club Metro, Scotty Phillips, aka Cartel Fenice, will grab a microphone and say something like, “You wanna know the best thing about college? Fucking your teachers.” Tonight’s theme, Sorority Cemetery, is one of many themed, queer performances that Metro is home to nearly every Thursday now. Calling themselves the “Bad Kids,” Cartel and her sisters—biological males and females doing any expression of gender identity ranging from classic femmes to post-drag witches—provide a stage for young genderqueer performance and a loving community of freaks within Salt Lake’s sometimes-strict gay counterculture.

Within younger generations, drag culture is at a crossroads; our age is a chameleonic one, and post-Internet, we’re in a remarkable moment of subcultural revival. Since the “Club Kid” movement in the ’90s, which synthesized a century of American pop culture into glamourized, ecstasy-fueled EBM fashion, gender performance has expanded beyond the confines of its origins in femme realness. What the club kids gave pop culture in return was the unholy, postmodern dandy—the “party monster”—and they subsequently set out to frighten polite society. “I remember seeing Party Monster,” says Cartel. “I had this high school–age boyfriend when I was thirteen—he showed it to me, and I remember thinking, ‘I wanna be like that—I wanna do that.’”

Twenty-something years later, Cartel and the Bad Kids are bringing this mutant message to Salt Lake’s divided communities, straight and queer. “I have issues with the queer community here—the whole ‘no femmes’ problem. I’m trying to shove it in people’s faces—femmepowerment: feminine and proud. Creating a character who hates men made sense to me,” she says. As a member of the Bad Kids community, Cartel uses her performances to address serious issues in a variety of fashions: serious, fun and weird. “I go back and forth with my message being serious and comedy—that’s Cartel: I’m sharing something with somebody that is really hard and scary. Showing people that they’re not alone, and [that] being a freak is totally OK is important,” Cartel says. “I’m not a celebrity, I’m not mean, I’m not super scary—well, Klaus [von Austerlitz, fellow Bad Kid] is a little scary. We’re doing this because we want to express ourselves.”

The proud gem of Brigham Young’s utopian society, Salt Lake City has fostered a wonderfully vibrant community of queers for decades. Although we’ve got a rainbow of gender expression in Utah, queer performance is something that’s often taken for granted and that is at risk of becoming complacent white noise. Cartel’s persona has evolved from being a part of a traditional sense of drag culture to one that confronts stereotypes and prefab gender expression with a signature blend of mutant freakishness and motherly compassion. “I did ‘pretty drag’ for three years,” says Cartel, speaking of her first years in Salt Lake in her late teens. “I was never enough for them. They had all these rules: You always had to wear heels, you had to do your makeup in a certain way. I think I just got pushed too far by other drag queens being so rude that I just kind of stopped. I want to do a style of drag that sort of says fuck you, but I didn’t want to disrespect their art. I was like, ‘Why am I letting someone else make rules for me? I’ve never done that’—so I had this breaking point and was like, ‘I’m just going out wearing whatever I want.’ I’m not trying to get people to tolerate me. I’m trying to spoon-feed them something that makes them gag. I like making people feel uncomfortable. I decided to change my drag name and came up with this persona, started going out all the time.”

Cartel’s performances typically involve various amounts of glamour, frightening rituals and shocking imagery. Someone always ends up being covered in some bodily fluid—fake or real. The personality that she has created channels a misfit past into theatrical revenge. “Cartel’s character is dead,” she explains. “From day one: she died the night of spring formal, she and her best friend didn’t fit in. They didn’t get asked to the dance so they went to this overlook in the mountains—their favorite place to hangout, similar to a real story from my life—I grew up in a tiny town that was very much about the outdoors and the country. They were the victims of a hazing joke and they were both killed, but brought back by Satan. I’ve created her to be like a dumb blonde, the essence of stupid, but actually very clever—she’s putting on a front. Cartel’s a man-eater. I like objectifying men. I was really inspired by Marilyn Monroe: In her time, women were not equals. She was objectifying men, calling them ‘Daddy.’ I wanted Cartel to be this feminist character that makes fun of masculinity.”

The idea of the Bad Kids came about last summer when a number of them performed together at the Miss City Weekly Pageant. Cartel’s sis Willard Cron, who took home the crown, was performing for the first time. “I met a lot of the queens that I’m close with now at the City Weekly Pageant. After that, we all felt so inspired and fueled to be doing something bigger. For once, I was meeting people who had this common artistic vision who were really nice people who wouldn’t critique me—they appreciated my aesthetic and they didn’t want to change me,” says Cartel.

Speaking about their Thursday-night residency at Metro, Cartel says, “It just sort of happened. I didn’t know how to ask to create a show—we went in one day and we just set up a couple. I asked Princess Kennedy if she could help us and she hosted our very first show there. I invited Gorgeous Jared and Drew [Landerman]—people who I know are important in the community. We got together a big group of girls and we put together this really eclectic show. It was a celebratory night because we had found a home where we could all express ourselves and have variety.”

Their inverted black cross is now a fixture behind Metro’s stage, and you’ll find most of the family there on a Thursday night. “I think we all find inspiration in each other. We share stuff, we do everything together—we don’t just hang out when we do shows. It’s like a family. The core of us who did the first shows—Willard, Klaus, Nikki James, Lamia and myself—we’re working on variety and having different queens from different backgrounds.” The Bad Kids share Thursdays with Metro’s alternative Dance Evolution, which is inclusive of anyone who would like to perform, and everyone’s invited.

For all its focus on femininity and untethered gender expression, lots of cis, trans and biological girls feel that drag is still a boy’s game. “One of our goals from day one was to not have it be a drag show, to have biological males and females and kings and queens—basically whatever identity—if somebody has a vision and wants to be onstage, we want them to be onstage,” says Cartel.

Cartel sees The Bad Kids as only getting started. If you’re a young Tranimal looking to be set loose, find the Bad Kids around town at Metro on Thursday nights (21+) and Hydrate (formerly Club Pure) on Fridays (18 +). Here’s Cartel’s advice: “To become someone, you don’t wait for anyone else––you just do it. If you don’t take risks, you’re not going to go anywhere big. Drag can be empowering—it can help people and touch people’s lives and it isn’t some bitchy, weird community.” Don’t be shy! Say hi IRL—you may find your family.