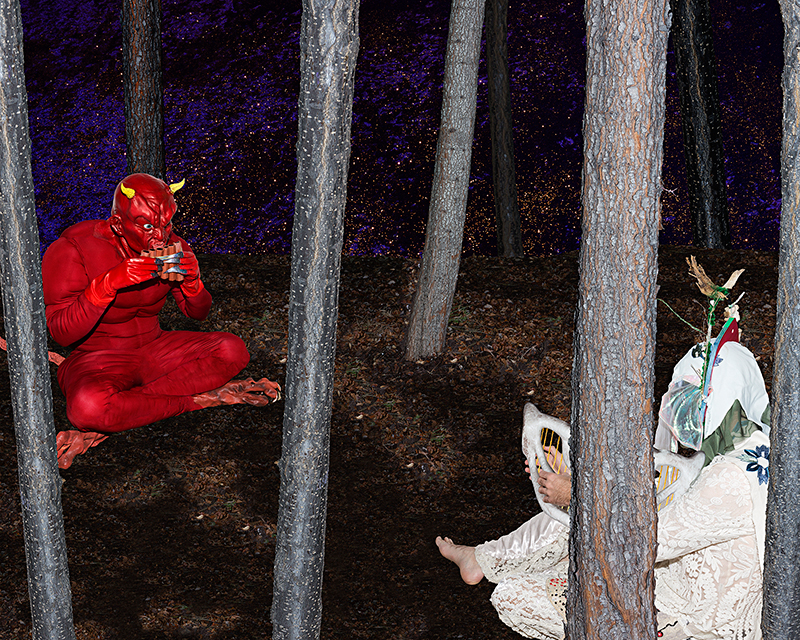 Your Demon or Your Angel: Noah Jackson and Jacob Haupt

Nox’s upcoming show between Jacob Haupt and Noah Jackson could not exist without the friendship the two share. Angels Don’t Cry, Demons Don’t Cry is a collaboration between them, which feels de facto for the pair. They’ve worked together several times before, and while they have something of a groove, this particular show stresses that relationship and teases what makes collaboration between Jackson and Haupt so interesting and worth seeing.

“The show is [Haupt] creating a devil character and myself making an angel character,” Jackson says. “[We are] illustrating the complexities that we imagine would exist in the friendship between the two of them.” The show comprises collage-like images, each one involving the demon and the angel. The images are made separately, so the viewer gets an insight into both Haupt and Jackson’s perception of themselves and the other person. “My process at this stage of the work,” says Jackson, “has been photographing myself and Jacob in our costumes and using Photoshop and physical drawings to create narratives that talk about the things I want to point out.” The images he produces are then ironed onto handmade, felt backgrounds and embroidered. “I will probably also find some small rocks I like to dangle off them,” he says.

You can feel that each in the pair has some sense of how they view this project that’s similar but slightly different, like two people looking at an object from slightly different angles. The curator for the exhibit, Laura Hurtado, also offers her insight in a way that influences the collaborative flow. “No one is pure demon; no one is pure angel,” she says. “[The two] are performing these roles, and the paradox and the similarity play out in the exhibition.” Haupt appreciates her input. “Normally, it’s me and Noah, struggling to articulate,” he says, laughing. “But she gets it and is able to help us work out these ideas verbally.”

Haupt currently lives in the valley while Jackson is in New York, and so each piece of the project is created on different ends of the continent. “Our friendship is kind of weird,” Haupt says. “We met in art school and became friends working on projects together, and that’s a weird friendship. We don’t really ‘hang out’ other than playing Magic,” he laughs. “It’s the only thing we can agree on doing outside of work.” The card game is an apt metaphor: Magic: The Gathering is a deck-building game where each player brings a particular flavor of deck they’ve built in private, which is then played out together. It evokes the element of play that’s present in the show—the inherent risk in not knowing how the material one person brings to the table may be played off by the other. It’s not a zero-sum game but instead bold, collaborative storytelling.

It was the pair’s boldness that caught Hurtado’s attention years ago. When she gave a lecture at BYU, they gave her a copy of Infinity Gate, which was one of the first pieces of work they had made. “It’s totally something I would have done,” she says. “I thought it was interesting, and I followed them both on social media and had seen they were getting various opportunities and showing at interesting places.” As young artists, Jackson and Haupt are taking risks that embrace the love of art-making, always toward an end. “I am trying to get at truth in my work,” Jackson says. “I think I use moments in my own life that felt surreal or ‘goofy’ as the driving force behind how I make things and what I base those things on because I think they translate closest to truth.” For Hurtado as curator, this attitude is a big appeal. When she was given the space to curate at Nox, she wanted to curate in a way she hadn’t before. Rather than taking artists’ work that fits a particular theme, she took a chance on Haupt and Jackson’s potential as artists she admired but whose artistic output was still being codified into a style. “Curator is a weird title for me in this instance,” Hurtado says, smiling. “I’m just along for the ride. This is their show.”

A show that focuses on not just friendship but the collaborative process between the duo has been a long time coming. “The first time we collaborated ... we couldn’t come up with something we both agreed on, so we decided to make an image with materials lying around,” Haupt says. The result was something intriguing but also deflating. “Some art, when you experience it, you feel something really strong. That was lacking. It was kind of dead.” Since then, the two have done several projects together and have a much better understanding of what working together means. “I am frustrated by the work when the work sucks,” Jackson says. “But I think if you are collaborating with love and communication, it shouldn’t be frustrating because you should both be respecting the other person’s desires and trusting they know what they are talking about.”

What comes next for each artist is still to be seen, though both admit they’re interested in experimenting and collaborating with others soon. Angels Don’t Cry, Demons Don’t Cry will run starting Feb. 16 at Nox Contemporary Art Gallery at 440 S. 400 W. through April 13. After the opening, those interested can book appointments with Nox to view the exhibit (Nox Contemporary on Facebook). See Jacob Haupt’s and Noah Jackson’s work at jacobhaupt.com and noahjackson.net.