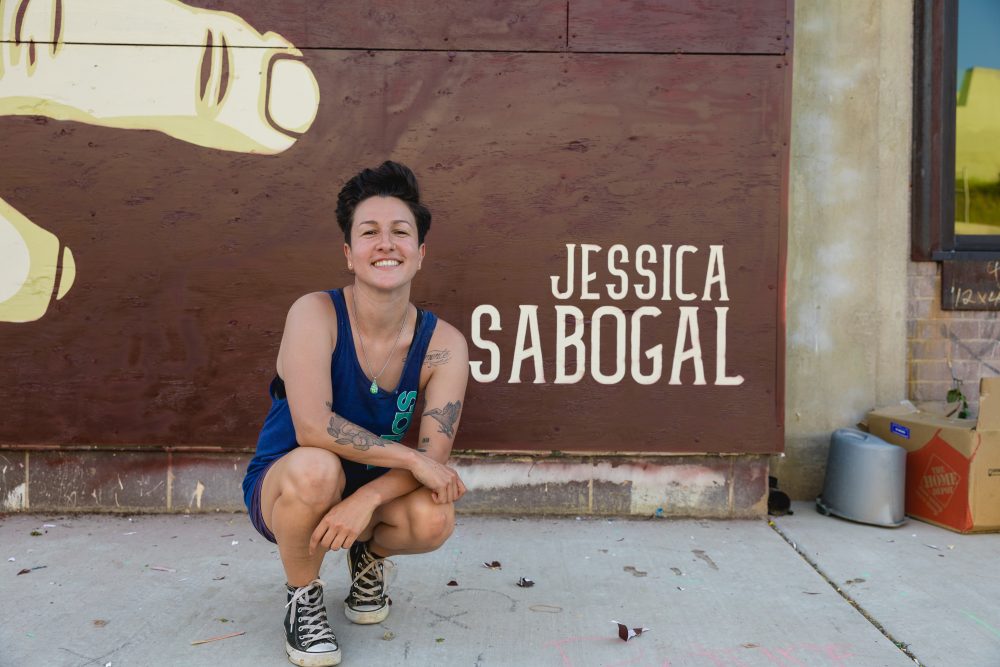 Salt Lake City is now home to a mural of one of this city’s most well-known artists and activists, Ella Mendoza, an individual whose passion for their community could only be captured by a portrait so large. The mural was created by the muralist Jessica Sabogal, a first-generation Colombian American whose spray-painted works reach out to marginalized people, show them support and speak the message of their struggle and humanity, which is so often misheard or misrepresented. The mural is located at 700 W. North Temple, and was officially unveiled on Sunday, June 9.

How do you begin the process of creating such a large piece of art that will be a part of a cityscape for years to come?
Jessica Sabogal: The stories of the people I depict are not unique. They’re just not being told. Or, if they are being told, they are being told incorrectly by other people with a colonial lens. So the work I do is about the unwiring of those narratives.

Every project begins as a research assignment. Who lives in the immediate area of the work I will be creating? What issues are they experiencing that need attention? What voices are being silenced? [Who] will my audience be? Who do I want to speak to? Who do I want to challenge?

SLUG: What is it about murals as an art form that really speak to you as an artist? Why is it that you choose to create murals of your subjects?

And murals are not going to bring back folks that have lost their lives due to police brutality, they are not going to cure cancer, and they are not going to get Obama re-elected. But they do serve as a disruption. They serve as a wrench thrown in a machine that was meant to keep us sterile and not thinking about the grander picture. So if any of my artworks cause someone to pause, even just for a second, on their drive to work or dropping off their kids, to think about someone other than themselves—I consider that a success.

SLUG: How did you learn about the SLC mural project, or who approached you?
Sabogal: The University of Utah approached me to give the keynote address during International Women’s Month this past March. It was then that the Office of Equity and Diversity—particularly Estella Hernandez, Rudy Medina and Jorge Rojas—teamed up to figure out a way to bring me back to Utah for a public artwork installation in the Salt Lake community.

SLUG: Why do you think Salt Lake City is a fitting home for one of your murals?
Sabogal: I like working in smaller towns, because the impact of the work is felt much more intensely. I haven’t seen very much street art or graffiti at all here. So what this means is that people like me, people like Ella–queer folks, people of color, migrants, etc.—are not seeing ourselves represented in public space. I’m excited to be able to publicly carve out that visibility for our narratives here.

SLUG: What specifically is your goal and inspiration for the Salt Lake City mural of Ella Mendoza?
Sabogal: Per Ella’s request, this mural will read “Este Barrio No Se Vende” (this neighborhood is not for sale). My work always has two intentions. If you see it and you get it, it’s for you. I hope it’s validating and grounding for you. For the folks that feel anything else, if they feel uncomfortable or [question] why it’s in Spanish, or don’t immediately understand its importance, it’s for [them] too. My goal is to make you curious about your apprehension to the work, to sit in it and have the uncomfortable conversations about it.

SLUG: What do you find interesting or inspiring about Ella Mendoza? Have you had any conversations with them in the time leading up to your mural painting?
Sabogal: When I visited Utah during Women’s Week, I gave a PechaKucha presentation off campus, where community members were invited to participate. That’s where I was introduced to Flor DeMaria (the photographer who took the image of Ella for the mural), who was the host for the evening. Although the space was primarily filled with white women, Flor ensured ground rules to create a sacred space for everyone that attended to be able to share personal narratives in front of the group. I didn’t know how yet, but I knew I wanted to involve her in the project.

That’s when I met Ella, who cut the room in half with what they said out loud that night. They spoke of their time in Utah, immigrating from Peru and living here as an undocumented non-binary femme and how at events like these they always have to navigate what it means to be in room filled with people that don’t look like them. They then spoke directly to the small number of other queer women of color in the audience and made it clear that they had their backs, that although they may have different world views, they all collectively know the feeling of being othered, and that alone is enough to create solidarity between them.

Ella addressed whiteness and white feminism in a room full of people that needed to be confronted with themselves. Immediately I knew the mural had to be about Ella, because they too were a disruptor in their own communities here in Salt Lake.

SLUG: What do you want your mural to represent for this community in particular?
Sabogal: Since I do not live in this community, it was very important for the folks who are familiar with what is going on to contribute to the final outcome of the mural. The first day I was working with Ella on the mural, they said, “This neighborhood literally saved my life.”

Like most cities that I travel to, gentrification is a major theme in many of its working class neighborhoods—Salt Lake City’s West Side is no different. Back at home, the Mission District of San Francisco, traditionally a safe haven and home for Latino immigrants since the ’70s, is at times unrecognizable. It’s now filled with tech employees in their 20-somethings with more money than they know what to do with. But the problem lies in entitlement and unawareness. There’s nothing wrong with having a good job and having access to money, but when you are a guest in a land that is not yours, you need to do your research; you need to be aware of the people that surround you and have been there decades before you.

I want this mural to serve as a direct announcement for the folks in western Salt Lake that have lived and worked here for many generations. This is for them.

Jessica Sabogal’s mural is located at 700 W. North Temple. To learn more about Sabogal and her work, visit jessicasabogal.com.