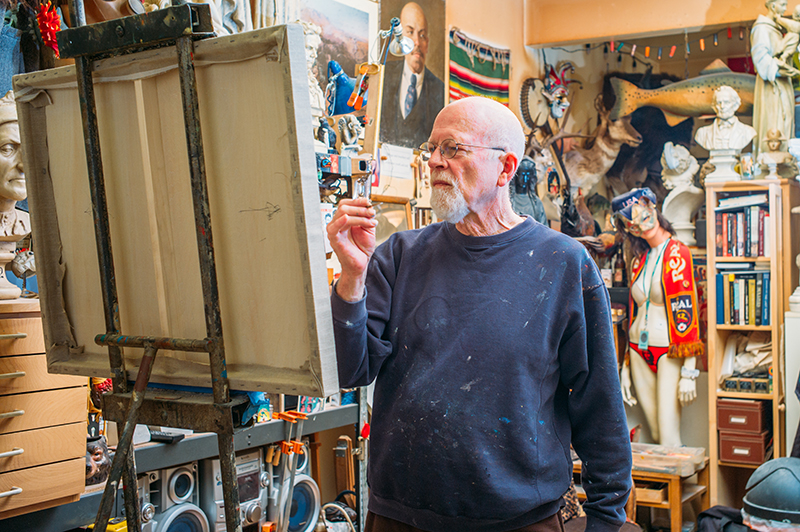 Sam Wilson’s studio is almost a direct reflection of his paintings. Every corner of space is covered in collectibles: keychains, bobbleheads of various popes, art history books and old Nordstom mannequins covered in kitschy regalia. “I think collage,” says Wilson, whose paintings feature portraits juxtaposed almost on top of each other in the same painting. The faces are often figures from art history—not necessarily the subjects, but the artists themselves. However, the artists are shown with more modern attire, featuring female figurines, such as Wonder Woman or pinup ladies, on their T-shirts. The trademark style of cluttered portraits in the same painting with colorful motifs in the background is something that Wilson attributes to his compulsions to fill the entirety of his paintings. He refers to it as horror vacui, the Latin term for fear of open spaces. Wilson plans on featuring some of these paintings in his upcoming exhibit at God Hates Robots in April. “What I’m doing now encompasses a lot of this stuff—‘Geezers and Babes,’ essentially,” he says. “I used to do the art history guys in a historical context. Now I do them as geezers in abbreviated herringbone suits, and they’re all me.”

Wilson is most known around Salt Lake City for his commission of the Stations of the Cross at the Cathedral of the Madeline and his tenure as a professor at the University of Utah for over 40 years. He continues to explore new subject matter in his retirement. “I’ve been an art major since 1961,” he says. “My philosophy is: Whatever you’re doing, don’t stop—it may not start again.” In addition to the paintings of “Geezers and Babes” that will be featured at the exhibition, which is still in the process of being named, Wilson plans on showing a few self-portraits. Wilson plays with proportion and perception in these self-portraits, one of which depicts Wilson wearing a Che Guevara shirt through the reflection of a silver soup ladle, while another shows him through the chrome surface of a martini shaker, one he’s named My self-portrait posing as a still life, or still life reflecting on my self portrait, or what’s shaking cowboy?

Although Wilson jokes that he could probably make more money painting landscapes, especially with the amount of rich source material and the audience in Utah, his primary concern with his own work, as well as when critiquing others, is authenticity. “Art is a product of somebody doing something long enough,” he says. I don’t care what kind of art it is; I’ve got to assume it’s authentic and they’re authentic.” For him, a lot of art is lost in the meaning and the subtexts, rather than focusing on the craft and the actual process of the artwork itself. Wilson jokingly refers to himself as a “luddite” and claims that he is still part of the 19th century. “The motives these days—it’s not the trip but the destination. It’s a fast culture. And I’m out of it anyways,” he says. “I’m just hiding in my studio painting away.”

Wilson’s body of work throughout his studio has been growing since his projects in graduate school. The visual appeal of the modernist aesthetic shines through the collection, though the subject matter changes. “The work I do is inevitable, and it started in 1961 when I was a bad art major,” he says. “Meaning, if I were to track it, it was circuitous and doesn’t make any sense, but it’s kind of like a train wreck, with each car bumping into the future.” In an artistic community where landscapes are more of an expectation, Wilson stays true to his “art geezers” and self-portraits.

Wilson certainly has a unique voice in Salt Lake’s small but thriving art community, something that has made him stand out in shows in the past. Although he believes that eccentric art is still an oddity in the community, he’s appreciative of the fact that the locals are so invested in art as a whole, and that art spaces like God Hates Robots exist. “God Hates Robots: It’s a name you don’t want to tell your grandmother about, but it’s a strange little place, and you could see anything there,” he says. “It’s remarkable—I think there are people who’ve invested their time and money to support the arts.” Though Wilson feels that there aren’t enough galleries in Salt Lake City, he feels as though being a relatively smaller town has contributed to producing some interesting art and talented artists. “For a little town on the edge of the desert, the artists here are remarkably good, and I think it’s because maybe they have to try harder,” he says. “[Big cities] are so good—they just don’t appreciate it.”