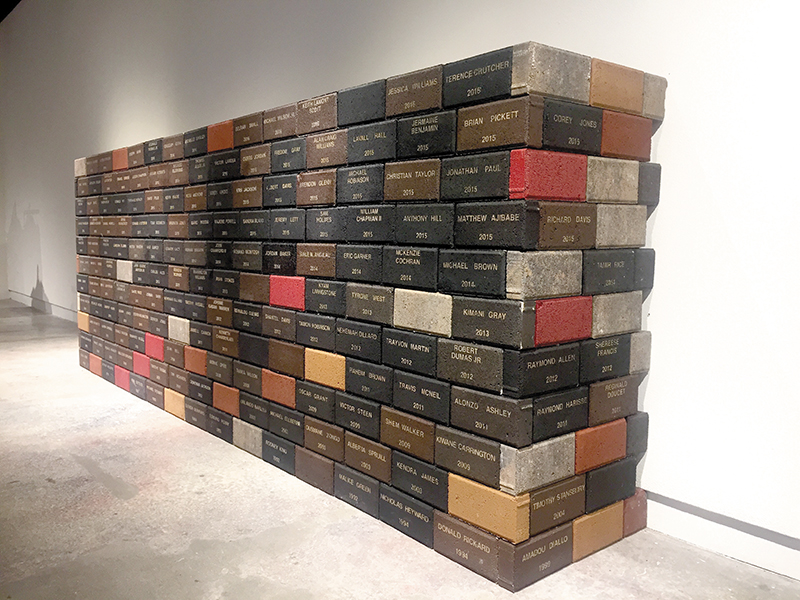 Art on Violence: The Future Isn’t What It Used to Be

Violence surrounds us. In The Future Isn’t What It Used to Be, a group exhibition curated by South Florida–based Susan Caraballo, 10 artists confront us with “manmade atrocities,” not through explicit spectacle or slaughter, but through rumination and social practice. Without pretense, each work demands that we pay attention to the violence that oversaturates our contemporary world—and the ways in which we are complicit. On show in the Utah Museum of Contemporary Art’s (UMOCA) Street and Codec galleries, The Future Isn’t What It Used to Be runs through May 13.

Toward the entrance of the Street Gallery is Stephanie Syjuco’s Dark Matter (Grey Cloud). The Oakland-based artist explores art as commodity within a late-capitalist society, a theme that rings clear in Dark Matter, which comprises several racks of identical, dark-gray sweatshirts. Syjuco adds another layer to the piece, however, by calling attention to the fraught implications of Trayvon Martin’s black hoodie. Made for the 2013 Miami art fairs, Syjuco’s work came in response to the art community’s unrealized talk of boycotting the art fairs in order to divest from Florida’s economy, in protest of George Zimmerman’s acquittal. Syjuco prompts viewers to question the effectiveness of political action/intention among (art) communities so ingrained within economic institutions and a world that demands black-and-white extremes—not gray.

Nearby is Rosa Naday Garmendia’s ongoing Rituals of Commemoration, in which the Miami-based artist honors Black individuals killed by U.S. law enforcement, beginning with the 1979 fatal beating of Arthur Lee McDuffie. A cultural producer, Garmendia brought Rituals’ social practice to UMOCA for a youth workshop, inviting participants to stencil and spray-paint earth-toned bricks with each individual’s name and year of death. The result is a stacked pavestone wall with far too many emblazoned names, among them Eula Love, Rodney King and Eric Garner. For UMOCA, Garmendia added Siale M. Angilau, a Pacific Islander killed in court in Salt Lake City. Built through a site-specific ritual of collective object making, the installation is a solemn, meditative tribute that helps us grasp the consequences of police racism and militarization.

Syjuco and Garmendia’s installations reference past and present, but Octavio Abúndez looks mainly to the future. An edition from his larger project, The Future Isn’t What It Used to Be, Abúndez’s Whistle Loudly comes in the form of a series of fake, colorful books arranged on a wall-mounted bookshelf. Here, Abúndez’s library recounts an alternate future for the year 2401, with suggestive and declarative titles like “ALL UTOPIAS HAVE FAILED,” “¿Y?,” “I HAVE SEEN IT ALL” and “WE WERE NEVER HERE.” They’re tongue-in-cheek titles, some referential, some plagiarized, that obliquely hypothesize the future before us.

Rounding out the rest of the exhibition are several compelling works of video art, which is fitting, given digital media’s role in desensitizing us to violence. Donna Conlon and Jonathan Harker’s 2015 video, Under the Rug, lends a strange sense of levity to its darker sociopolitical and environmental implications. In the video, two individuals lift up the corners of a piece of grassy turf, under which they matter-of-factly sweep debris. As the mess grows from specks of dirt to piles of trash and broken toys, Under the Rug’s initial sense of playfulness becomes nefarious.

Both capture universal feelings and actions, but while Under the Rug was specifically staged, Antonia Wright’s Are You OK? candidly documents her ongoing performance piece and passersby’s real-life responses. In the two videos, Wright wears a simple black dress and stands on busy New York and Paris street corners, visibly crying. Many strangers pass her. Some notice her and are clearly unsure whether or not to approach; one stops to hug her tight. It’s a take on violence that especially resonates in 2017, when so many of our interactions make their way to that uncomfortable “Are you OK?” By bringing these emotions into the public realm, Wright asks us—and those around us—to gaze unblinkingly into that pain, reminding a bit of poet Lora Mathis in equipping radical softness as a weapon.

The final two works in The Future Isn’t What It Used to Be present a more tense and overt depiction of violence. Leandro Lima and Gisela Mota’s looping I.E.D. (Improvised Explosive Device) shows a loudly pulsing, precarious human heart crafted from the things we consume—soda cans, Marlboro cigarettes—all taped and wired together, on the brink of destructively collapsing or bursting. Ananké Asseff’s two-part Rueda de reconocimiento (LineUp) resides in the Codec Gallery. A small television in the hallway displays live black-and-white footage, and a sign asks visitors to check the monitor to make sure that the interior gallery space is empty before entering. Inside is the motion-activated second part of Rueda: a large screen with five individuals, backs turned, faceless yet threatening, commanding viewers into the role of victim.

From Syjuco’s gray hoodies to Asseff’s startling video affront, The Future Isn’t What It Used to Be detaches violence from the sensational and brutal, attaching it instead to the intimate and the suggestive. The works ask us to examine contemporary, human-made violence from visceral perspectives that are both timely and timeless. Rather than dishearten, Caraballo and the 10 artists challenge us “to create the future in which we want to live.”