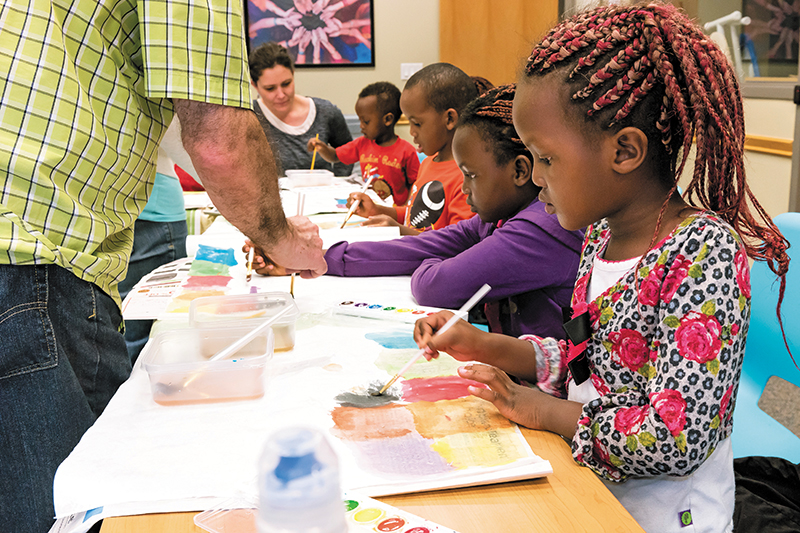 Salt Lake City’s inner art community feels like an extended family, but for reasons that I don’t completely understand, artists outside of the Downtown sanctum are detached from the group and are often, albeit unintentionally, marginalized. Artist and scenemaker Andrew Ehninger identified the need to rectify this inequality and founded Salt Lake City Artists on Facebook. Ehninger, along with a few of his peers, passed the invite along. Three weeks later, the group has 500-plus members. To capitalize on this movement, the group began discussing collaboration opportunities. This discussion quickly turned to community impact and common good, and it became the genesis for Stranger In A Strange Land, a group art show to be held on June 17 at Mod-a-go-go to benefit the International Rescue Committee of Salt Lake City, which serves the Utah refugee community.

The International Rescue Committee of Salt Lake City supports refugees from around the world who are invited by the U.S. government to seek safety and freedom. They provide resources for housing, education and community integration and development. Utah, even with its oddities, can seem like a relatively normal place to live. The job market is good, homes are in line with wages, liquor laws are—while frustrating—still manageable. IRC of Salt Lake City not only provides sustainable resources like food, water and health care, but they also provide vital mental health counseling and resettlement support in navigating this unfamiliar land.

Strangers in a Strange Land features over 20 artists, many of whom have deep roots in social justice and human rights work. Cat Palmer will be one of those participating artists. Her work to shed light on female reproductive rights and inclusion of all humans has won her several awards and widespread recognition. Craig Fisher is well-known in the refugee community for his work in the Healing Through Art program, run in conjunction with the Holladay Arts Council. Fisher’s piece for his show turns the focus on to the military forces, many of which are dropped into unfamiliar territory and left to navigate their way in a strange land. While several of the pieces in this show will tackle the theme straight on, artists are given the flexibility to work within and around the theme as they see fit.

How can you help? A departure from a traditional exhibition, this show will be displayed and sold as a silent auction. Each piece of work will have a minimum starting bid to allow the viewer’s generosity to flow. This is a unique opportunity to purchase art, likely discounted from its market value, while simultaneously supporting an incredible, deserving human-rights organization.

A complete list of artists can be found at SLUGMag.com. These 20 artists deserve a round of applause for banding together for a common good by donating their time and talents for this show and silent auction. Their efforts echo the words of early film and stage actress Sarah Bernhardt, who said, “Life engenders life; energy creates energy. It is by spending oneself that one becomes rich.”

Utah is fortunate to have so many kind, generous, talented and passionate people. Please enjoy the rich humanities our community has to offer and take time to go for a stroll.