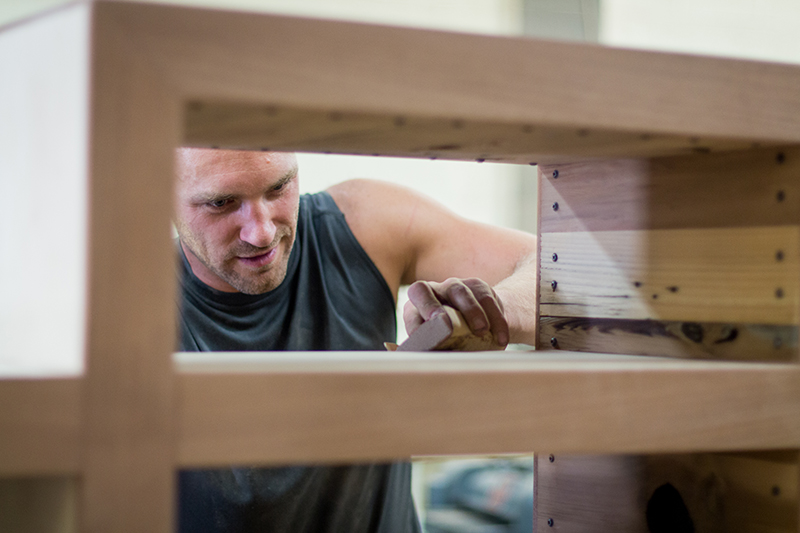 Two years ago, Sacha Mercier took an unprecedented leap of faith into the world of functional design and community-centric craftsmanship. He thought of a name—Impartworks—and set his driveway up with a workbench, saw and drill. Using reclaimed wood—because free, recycled materials were initially his only option—Mercier built his first piece: a charming wall-mount planter.

Since then, Mercier has relocated his studio to Rootform, a Downtown, multi-disciplinary makerspace, and he’s expanded his concept—functional art—to large furniture pieces and wall art as well as a variety of commissioned projects, which have included anything from custom corn hole sets to a terraced landscape of treated lumber and raw steel.

Perhaps because he taught himself everything he knows—as both a designer and a builder—Mercier has a distinct approach to design with a flair for the unexpected. Typically, Mercier either designs around a piece of material that he likes, or ideas will pop into his head about new ways things can be put together. “For me, design is more about accepting imperfection than seeking perfection,” says Mercier. “Most of my unique designs come from making mistakes or flaws and then finding a way to adjust my piece accordingly.” Mercier takes classic household staples and incorporates rich flourish and impactful reimaginings. “I like my designs to be counterintuitive, to challenge the person who’s looking at it,” he says. True to form, Mercier has yet to reproduce any of his pieces, remarking on his very first table design. One of his most jarring pieces, the table features two levels of glass surfaces with reclaimed wood—in different sizes and colors—staggered sideways and asymmetrically. The piece was on display at Mod a-go-go until recently, when a customer saw the table and knew that he needed it in his home. “That’s the most rewarding part,” says Mercier, “when someone can relate to a piece like that—it makes it all worth it.”

The community has responded enthusiastically to Impartworks, keeping Mercier busy with custom orders, markets and festivals. Mercier sets his craft apart not only with stunning pieces and a knack for the eye-catching and unusual but also in his efforts to bridge the gap between artisan and customer. “From the start, one of my goals was to reintegrate the human factor into the exchange of everyday goods,” says Mercier. “DIY culture represents that important push back to the artisans.”