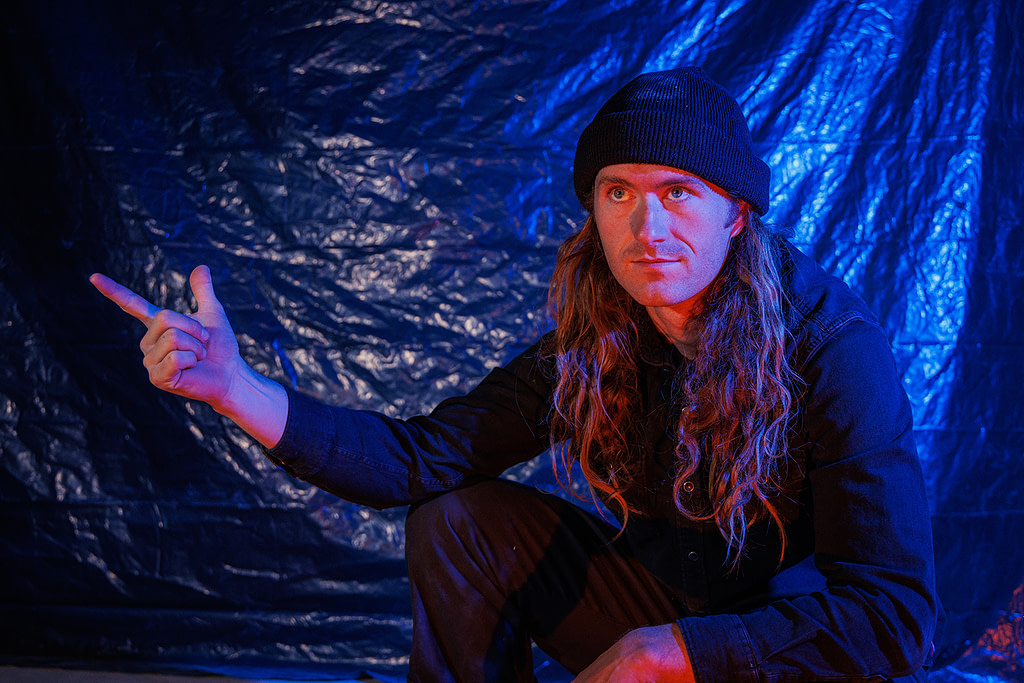 In the Pursuit of Punk: An Interview with Landon Hale

Born and raised in Salt Lake City, Landon Hale got his start in photography at a young age. After fooling around with a polaroid camera and graduating to disposable Kodak cameras, Hale took inspiration from his surroundings for the focus in his early photography. Whether it was portraits of friends from school or landscapes that inspired him, “I just always remember having a camera with me,” he says. Hale’s photography evinces rawness and reality. His portraits capture the intimate moments and expressions from his subjects, while his action photos tell the story from the inside out.

Hale’s book, Punk’s Not Dead, It’s Hidden, encapsulates the portraits of the people at the heart of the punk scene, accompanied by letters written during the stay-at-home and lockdown mandates that took place in Salt Lake City. The heartfelt and vulnerable letters gave the photographs in the book a voice. In turn, it helped solidify the sense of community and belonging within the Salt Lake City punk scene.

“There is an intimate interaction that takes place when you take someone’s portrait. Having these experiences helped me feel like I got to know a lot of these people on a deeper level.”

In the local scene, Hale chalks up his early connections to seeing wild and theatrical local shows. “There’s a band called MDC from the ’80s that played a house show in a place right next to the old Vertical Diner. I was skeptical about going to hardcore shows. It was one of the craziest shows I have ever seen to date. The singer was this guy in his late 50s or early 60s, and he got picked up and thrown through a drum set,” Hale says. “All of the lights in the house blew up and people were rolling around in glass. It was so theatrical and crazy. It was like something out of a movie.” Experiences like this fuel the punk in all of us. Not the violence or the craziness but the sense of belonging to something bigger than oneself.

Punk’s Not Dead, It’s Hidden started as a photography journey three years ago, documenting the local scene and Hale’s experience within it. “I knew I wanted to do a project with all of the portraits and live shows, but I didn’t know exactly how to tie it all together,” he says. “When COVID happened, there was this absence of anything going on, so I wrote some people online asking what it was like missing their culture/scene and why they loved and why they missed it. People wrote me really heartfelt and heavy things about what it’s like missing these things and the importance of the community.”

Adding the finishing touches to the project came when things started opening back up and Hale could complete some of the portraits that are featured in the book. “There is an intimate interaction that takes place when you take someone’s portrait. Having these experiences helped me feel like I got to know a lot of these people on a deeper level,” says Hale.

These letters put it all together for Hale and inspired for the title. The positive reaction to Hale’s book was evident when he was able to sell pre-ordered copies and then sell out the night of his book release and gallery show. “People were pumped!” Hale says. “People were excited to see themselves in a book and see it all come together.”

After some trials and tribulations of printing mishaps, Hale was able to get the book squared away and has been selling it ever since. “I think long-form projects are my favorite at this point,” Hale says about projects coming down the pipeline. “I’m for sure going to write another book.” He notes a particular interest in highlining, which is—in an extremely oversimplified way—slacklining above very high and large canyons.

“I knew I wanted to do a project with all of the portraits and live shows, but I didn’t know exactly how to tie it all together.”

As far as favorite local venues and places to see shows, Hale has some hot spots and staples. “The Beehive is the best. Best shows, the best people and the vegan diner [Mark of the Beastro] there really great, too. Aces High is great, it’s heavy metal guys that made a heavy metal bar so it’s always fun to see shows there. Also, Wild Pepper Pizza, I don’t know how the punks got a hold of that place but they throw wild shows over there.” Hale’s passion for the Salt Lake City scene is inspiring and genuine. Of this, Hale says, “With things coming back, there is so much creativity happening and the music is so tight. People took the lockdowns pretty seriously to practice and keep getting better, and it definitely shows.”

Hale’s journey from a kid with a camera to embedding himself and becoming passionate about all things punk, skateboarding and photography is inspiring on many levels. Punk has a million different meanings, but the communities that surround it around the country are singular and individually important. On a final note, Hale says, “Go to a punk show ‘cause it’s not as scary as it looks. If you want to do something just do it; don’t wait for people to tell you. That’s the biggest thing about punk rock: It’s empowering and it teaches people to think for themselves and do the things that they want to do. Punk doesn’t speak to the masses, but the knowledge from it can.” Hale is continuing to sell his book and shoot shows and skateboarding all around the SLC area. Check his personal website for photos and updates on work at LandonHaleMedia.com and check his Instagram at @LandonHale.