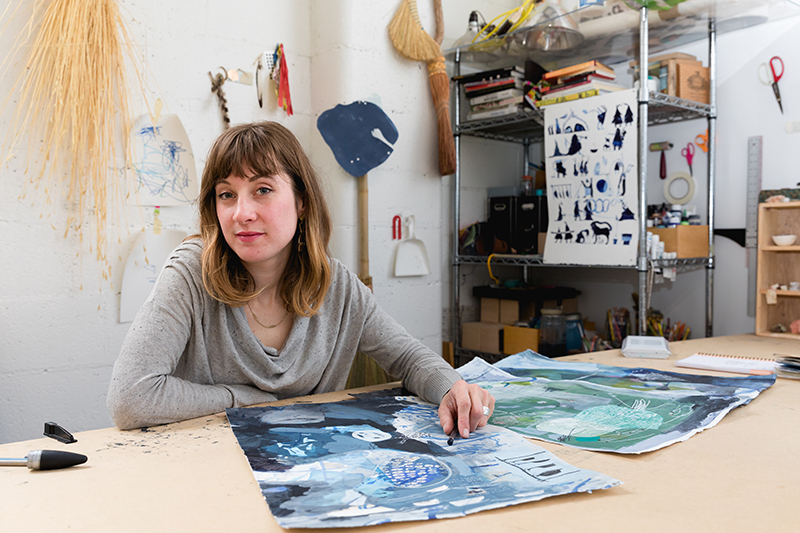 To Infinity: An Interview with Wren Ross

When I visited Wren Ross’ studio, an unassuming blush-brick building on the West Side of Salt Lake, I wondered if I had written down the wrong address. The parking is a gravel pit, and there are no windows or visible signs, nothing to suggest artistry. Once inside, I understood—the ceiling is astonishingly high and the lifeless, industrial walls are begging to be canvassed. Ross’ gangly, gentle dog pads around, and there is tea steaming on the slab table. “There is a profound intimacy in people doing very basic things,” Ross says, “like when you miss someone that you haven’t seen in a long time and you think of them standing in the kitchen making eggs in the morning.”

Ross’ body of mixed-media artwork reads like a graphic novel: From afar, there is a story arc that connects each piece to the next, but each frame is a cosmos in itself. Ross is interested in fragments, the remnants and castoff bits of life that aren’t obvious at first glance. Glancing through her blog, it’s  clear that she has made close examination an intensive daily practice. There are photographed images from a casual walk around the block of a single, colored wire, a small cluster of shadows on the sidewalk. These wabi-sabi images serve to remind that there is meaning even in that which seems meaningless. If Ross’ work could be summed up in one statement, it would be simple: Look. Step back. Then look again.

Influenced deeply by the drawings done by primitive humans, Ross is careful about the tools she uses and the way she may respond to each one. Though she works with a laundry list of mediums from pencil to printmaking, Ross consciously chooses paper over canvas and reaches for natural materials such as ash and plant-derived pigments. “I think of drawing as a bodily practice,” Ross says. Her workspace is a reflection of this care for movement and gesture, with drawings and paintings hung at different heights in various states of completion. One could visualize her almost dancing from piece to piece, following the physical rhythm of her hands and wrists. “We all have little engines in us that make us want to make marks,” she says.

In Star Atlas 2, a recent piece, Ross incorporates humble, creatural symbols with a cosmic-blue color palette, making a sort of quilt that drapes from the stars in the sky to the dirt of the Earth’s ground. Though the poeticism of the image is rich even without words, the text below reads, “The withered leaves; the cookfire; the burning bow; the agaric and the first disembodied marker.” Ross locates the space between humanity’s outstretched hand and the great unknown beyond and paints it. Other pieces in this collection include stark red and black motifs with swirly depictions of animals and bodies of water, bringing to mind images of what we know of early man—hunt, gather, cook, wonder.

Ross is an artist by day and a social worker by night, spending her evenings as a crisis-intervention specialist in a local hospital. “It’s important to be checked in to the human condition,” she says. Guiding people through their most vulnerable and trying moments gives Ross a pointed perspective as a creative person, as she is able to unload the extreme, emotional experiences into her artwork. She often works through suffering and sadness in her work, pondering about how humans can relate to each other in a more nourishing way.  It’s not only the catastrophic that Ross grapples with, but the mindless, everyday ways in which people communicate with each other.

“I feel really sensitive and overwhelmed by the extent to which digital media keeps people from checking in with what’s important to them,” says Ross. “We’re constantly looking to the internet to tell us what’s valuable. We get disconnected from our environment, and not surprisingly, our environment suffers. Humans are pack animals, and we are better or worse when our pack is healthier or not.”

For her upcoming exhibition at the Utah Museum Of Contemporary Art (UMOCA), Ross has been continually looking upward for inspiration. The celestial—specifically, the study of archeoastronomy—has moved Ross to create artistic renditions of maps and atlases. These works explore constellations and emphasize the human practice of telling stories and passing on myths in order to navigate culture and belonging in the world. Smaller paintings will serve as “keys” to a larger, mythological puzzle. The exhibition will be dimensional, allowing patrons to move physically through the space and reflect on the single stroke of a brush and the vastness of the universe simultaneously.  If just one person is able to stop and feel this sense of infinity, the collection will be a success in Ross’ mind.

To catch some star-gazing, visit UMOCA (20 S. West Temple) through March 23. Ross’ solo exhibition is titled The Forge, The Gibbous, The Heron, The Oilcan: Contemporary Constellations for Navigation.