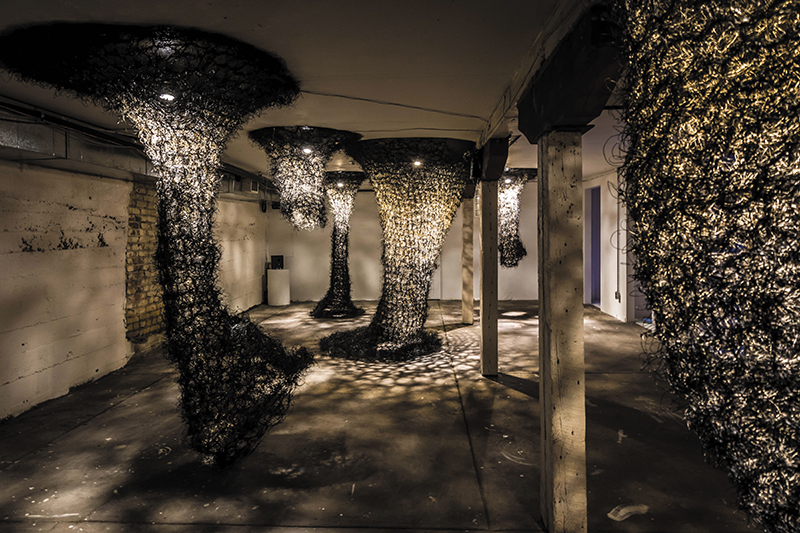 Inhale, Exhale: Swen of the Wirble

April 3, 1974. The town of Xenia, Ohio, was hit by an unprecedented tornado that went on to ravage 13 states and kill 324 people, injuring more than 6,000 in a devastating 24 hours. Only in 2011 has a tornado challenged that level of destruction and death. Swen of the Wirble is an installation piece based off the Xenia tornado, made in collaboration between artists Banyan Fierer and Christo Allegra. The piece is hosted at Fringe Gallery, and it’s designed to give its audience a personal experience in the context of destruction, invoking awareness not only of the reality of natural disasters but also of personal disasters—and the reconciliation of the two into something new.

The installation allows the audience to walk around a near-dark room as warbling audio builds and fills the space. That audio feeds into a dynamic lighting system that illuminates several sculptures made of polymer and enamel netting, each constructed in the image of a tornado. As the audio informs the lighting, the lighting affects the audio, and the dynamic relationship ensures that the experience is never completely the same twice. The sculptures vary, some more conical, others weaving in on themselves and even lifting above the ground. As the room grows brighter and louder, the viewer can see that the inside of the netting is painted gold, creating a shimmery allure as the lights flash.

The hope is to take the piece beyond Utah and eventually continue to develop it. Fierer’s background in architecture and Allegra’s information design background pair well for this project. The two spent three months conceptualizing and constructing Swen of the Wirble. Much of the primary material came from xeniatornado.com, which is singularly run by Homer G. Ramby. Fierer and Allegra worked with Ramby to gather audio and field recordings, news broadcasts and personal accounts in order to build the factual foundation for Swen, something both Fierer and Allegra felt was important in using a real-life event as inspiration—especially one with the potential to be this traumatic. “This event that happened 40 years ago still occupies a space in memory,” says Allegra. “How do you redeploy it or reconnect with it as way of helping people process destruction?”

We talk a while about disasters and our relationships to them on a human scale. Allegra was in New York during 9/11, for instance. Why do people continually visit a place like Ground Zero? Why visit a place where, physically, there is nothing? “It’s because they want a sense of scale,” suggests Allegra. “You can’t get that any other way.”

Tornadoes are not a common threat to Utahns, and I admit to Fierer my skepticism of the piece, of mining this particular moment in history, before seeing it. As Fierer talks more, it becomes clear that it plays exactly into his fascination with alchemy and ways to achieve metaphorical transmutations—synthesizing disparate elements into something new. “Embedded in [Swen] is the relationship between natural disaster and personal disaster,” he says. “It’s about humanizing it, but not just so you get a … sensory experience from it, but so that you begin to look at it … in a contextually completely different way than you have before. … When you’ve constructed something from all that, that’s what we call transformation.”

The exhibit is exhilarating, but it requires a willing mindset. Stew in it a while when you visit—10, even 15 minutes. I entered the exhibition at a slower moment feeling prepared and tranquil, having just spoken to the artists before. As I began to hear the whir of the storm, the dissection of the air, I suddenly felt unable to move. As the noise ebbed and flowed, I searched the dark for something to hold onto—walls or pillars, anything to distract from the rush of the storm. Newscasts of the disaster, messages from the surviving, even footage of the storm are stored like rations in separate rooms, but the noise and lights surrounding them dissipated slowly, and soon I heard only the gentle sound of wind chimes to guide me. Lights brightened with each warble, and I could see the golden interior flicker, a dancing fire from which I legitimately couldn’t look away. In the tranquil moment, I thought only idle thoughts—the kind that often interrupt my mind each day but that I dismiss for lack of time: Am I kind enough? Did I need anything? Am I hungry? For what? The name of the person I miss. Suddenly, abruptly, the storm reignited, the lights flashing bright, and I’m faced with the image of the golden warble. Immediately, I felt present in a way that felt like a crashing wave.

It’s a narrative that depends on an audience that is willing to chew. If the audience were to walk in and take the exhibit at face value, a sculptural and sensational reading of a tornado, they’d miss the absolute, intense journey both Fierer and Allegro have taken together.

One of the concepts Fierer brings up in our conversation is the Buddhist concept of inhalation. Breath is inherently cyclical: Inhale hope, exhale abandon. “The only way you’re able to take another breath, in many ways, is to die,” Fierer says. “That’s the way I see it.”