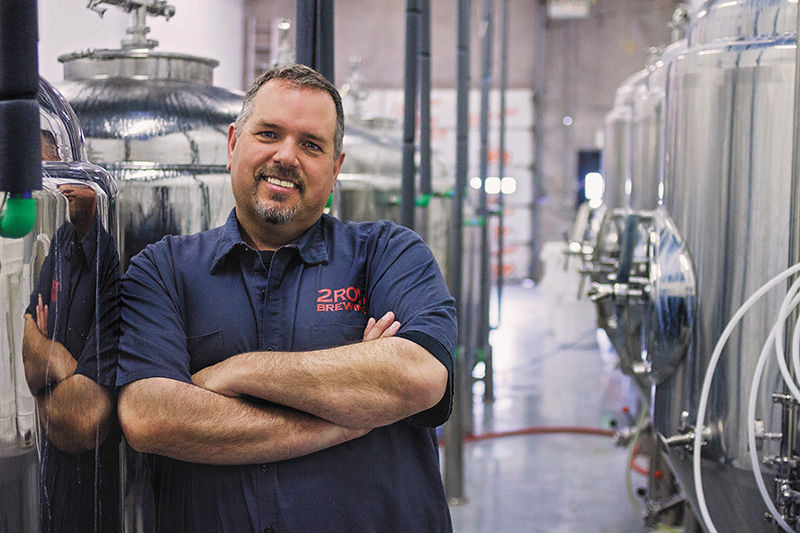 Over the last decade or so, the American-style India Pale Ale has quickly risen to become the most popular craft beer style since the mid-’80s. Utahns have not been insulated from this trend at all. In fact, our brewers have been keeping pace with the rest of the nation with regard to quality and drinkability. One such local brewery that has been making a name for itself in the IPA game is 2 Row Brewing Company. Owner and Head Brewer Brian Coleman’s take on the bitter ales has been met with anticipation and enthusiasm due to his ability to make world-class beers that stand up against the trendiest beers in America.

You may have noticed an evolution in the flavor of these hoppy beers. “Citrus and tropical fruit flavors are dominant right now,” says Coleman. “The more piney and herbal styles just aren’t selling that well right now.” Brian refers to the hop profiles in IPAs. “Over the last decade, hop producers have been developing hops that create a much more pleasant drinking experience. Instead of harsher and more abrasive bitters, they now take on softer, citrus, berry and even tropical flavors, and that has really boosted their popularity.”

In the brewery’s short two years, 2 Row’s beers have developed a cult following among beer drinkers. ”Even when I was a home brewer, IPAs were my favorite style to make,” Coleman says. Even then, he was known for his professional-tasting beers. ”I was really focused on making them better than the commercial beers that were available,” he says, “and when I was doing IPAs really well at home, that was the same time I knew I was going to start a brewery.”

But having a love for something doesn’t necessarily translate into making it well. “I knew that if you’re going to go commercial, you really have to make excellent IPAs,” Coleman says. “If you can’t do that, you’re not going to stand out with anything else.”

While the ingredients are important, there are other factors that can make or break a great beer. “I’ve always believed that water chemistry is extremely important,” Coleman says. “It’s one of those things that really sets commercial beer apart from home brew.” What is present (or not) can greatly affect hop flavors. “Reverse osmosis, mineral content, even pH levels in the wrong combination can make a great recipe average.”

As we sampled an IPA, Brian admired the beer like it was a pet. ”Another thing that helped take the beer to the next level was oxygen’s role in IPAs,” he says. “I didn’t realize that a little carbon dioxide wasn’t enough to purge all of the oxygen out of the beer.” While oxygen is important to the beer before fermentation, it’s extraordinarily bad once it’s done. “We now have a process where I can measure how long it takes to remove all of the oxygen from the beer,” says Coleman of a costly and time-consuming effort that some breweries may not be able to implement. “We purge the tanks with CO2 10 times longer than we originally did. It takes massive amounts of gas to get the O2 levels down to where we need them to be … It keeps the beer fresher longer. It’s the difference between tasting the ingredients individually versus it tasting muddled, bland and cardboard-like.”

It was becoming apparent to me why my home brews were never on his level. Coleman says, “For me, brewing beer is a matter of getting not just one or two things right, but hundreds of things right. It’s not just recipe formulation or oxygen levels. It’s like conducting an orchestra. Every instrument has its part to play, and the timing has to be perfect for everything to sound right. It’s the same for the beer.” Hitting all of those steps every time is a big reason why these IPAs stand out. “If you’re able to get 80 to 85 percent of those steps, you’ll have a good beer, but we strive for 100 percent of those steps every time.”

All of this great science is cool and all, but if you don’t have the hops that your customers are craving, they’ll probably look elsewhere. “I’ve gone to great lengths to acquire the most flavorful hops available,” says Coleman. “Most are in great demand and can be a little spendy, but they’re so worth it.” As we continue to sample IPAs, it’s clear that there’s a massive variety of hops used here. “We’ve been experimenting with so many varieties of hops that I’m not sure what I want to use six months from now,” he says with a grin. “At this moment, I’m looking for fruitiness in hops. The Northeast style IPAs are really hot right now.” The Northeast style of IPA is far more cloudy-looking and much more fruity and less bitter-tasting. “We’re focusing on those. I’d like to have three different types of those in my cold case at any given time.”

IPAs continue to dominate the craft beer scene. Breweries like 2 Row ensure that consumers are never bored with their beer selections. “I love the challenge of making IPAs,” Brian says. “They’re not the easiest beer to get right, but when you do, there’s nothing in the world like them.”