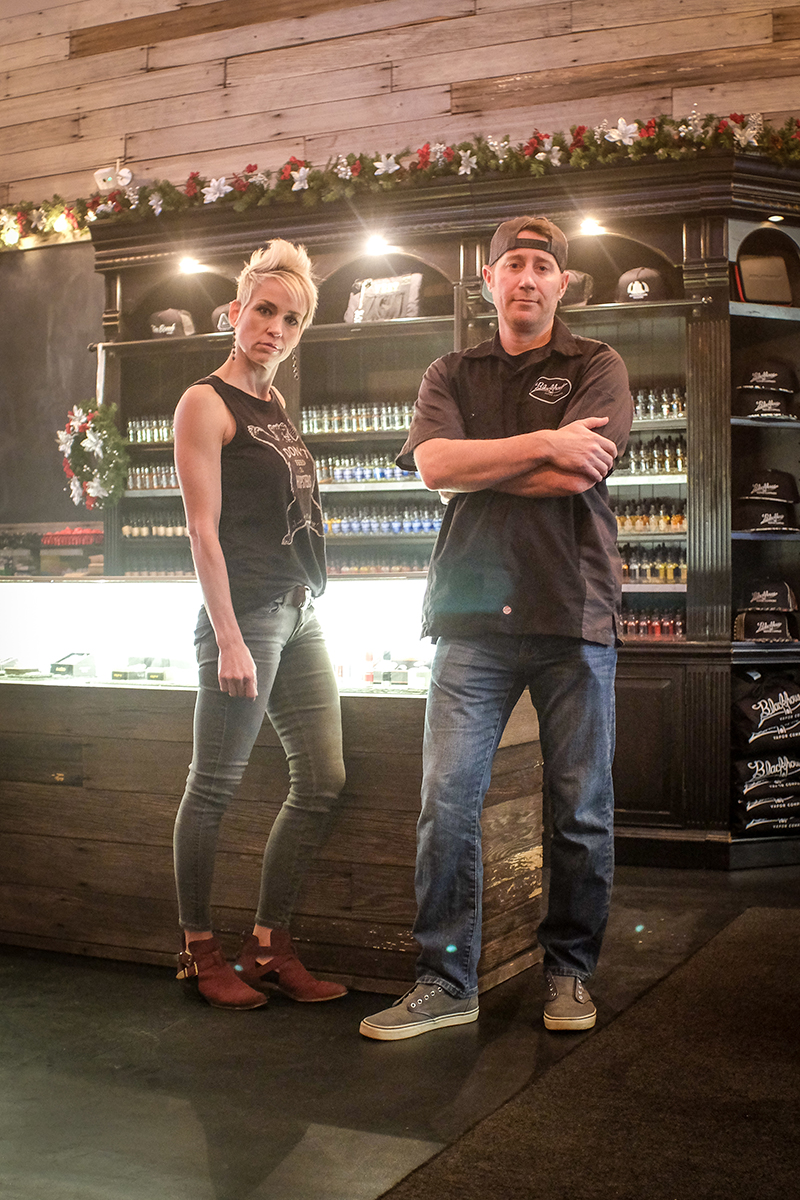 A Touch of Class: Blackhouse Vapor Company Arrives on the Scene

Blackhouse Vapor Company opened in Sugar House about three months ago, right around the corner from Trolley Wing Co. Owners Holly and Mike Berry were inspired to create a different kind of vapor store after visiting a few others with a family member and realizing “that there was really no customer experience,” says Holly. “The service was just, ‘Hey man, what do you need?’” Believing they could do better, Holly and her husband, Mike, an SLC firefighter, envisioned a business that would be “not a vape shop,” says Mike, like so many others, “but a vapor-lifestyle shop.”

According to Holly, she and Mike “wanted people to have a place where they could come in and feel comfortable—welcomed,” she says. Blackhouse would be not only “a place where the vaper who lives that lifestyle can get everything they need that fits their personality,” says Mike, but also a useful, helpful environment, where not knowing how to build a dual Clapton or braid a coil doesn’t make you an outsider. “You get the new vaper,” says Mike, “the person that’s trying to transition from smoking, and a lot of them are skeeved out to go into these smoke shops, you know? Some of them can be pretty stabby. We did not want to be one of those stabby smoke shops.”

Instead, they opened Blackhouse, which now offers house-blend juices, custom builds and repairs, a huge range of mods, starter kits and juice brands—carrying local manufacturers like Still Chuck and Doc Mod, their own apparel line, cloud competitions, coil-building workshops and more. Plus, I spent an hour in there and didn’t get stabbed once. I mean, they have vaulted ceilings and filament-bulb lighting going on—frankly, it’s classy as all get out.

It wasn’t easy, however, selling Utah real-estate holders on the idea of a high-end vapor store. “The biggest challenge was securing a location in a place where we wanted to be,” says Holly, “because of the misconception of vaping that the general public has. People would say, ‘Nope, we have a moral dilemma with that.’ We heard ‘moral dilemma’ so many times, I thought, ‘If I hear moral dilemma again … Wow.’” Even with an enthusiastic landlord finally on board, the future of vaping and vape-store regulations is a big unknown, and future policy changes could affect store owners and the vaping public alike. “There’s so many loose ends out there with what the state could impose on us,” says Mike, “and what the FDA is trying to impose nationwide.”

But the Berry family sees the solution to the uncertain future of vaping in their customers and the ever-growing vape community. “We have an incredibly wide demographic—it’s diverse, it’s all walks of life, and all socioeconomic groups,” says Mike. “We had an 80-year-old lady come in here; we have people in their 60s who are really hip to it, who’ve come all the way from the spinner up to their 200-watt, custom-built box mods, and they love it.” From Holly and Mike’s perspective, the variety and sheer quantity of everyday citizens becoming vapers makes us a formidable political interest group in our own right.

“[For] people who vape, if they use their voice and make it known,” says Mike, “I think there still is a process in America that, to some degree, the squeaky wheel gets the grease. Now, you’re going up against lobbyists and big corporations that have special interests, but the more people speak up and the more involved they get, the better the odds are that we’ll have a favorable outcome.” Holly and Mike hope to do their part with Blackhouse and as members of SFATA—the Smoke Free Alternatives Trade Association, an interest group on the side of vapor enthusiasts.

“Once you start down the road of legislation,” says Mike, “it becomes a slippery slope,” but too far in the other direction is no good either. The Berrys take pride in the lifestyle they work to foster, but they’re also conscious of the fact that acting in the interest of vapor culture can get confused with glorification. Ultimately, these two vapor enthusiasts believe their product should be viewed as a smoking-cessation tool rather than as a permanent alternative to cigarettes. “We don’t suggest that anyone start vaping, and in fact,” says Mike, about when they ask, “we suggest that people use vaping to quit smoking and then quit vaping.” It may seem like a risky thing for a vapor store owner to voice these opinions, but you have to admit, it’s a classy move. “It might not be the best business model to suggest our customers get off our product,” says Mike, “[but] that’s the whole logic behind [vaping], and there’s enough future ex-smokers that we’ll always be good to go.”

In the vapor community, it’s mature voices like Holly and Mike’s that go a long way to help legitimize and demystify this wonderful new smoking-cessation tool in the eyes of the general public. Blackhouse is a grown-up store with a grown-up approach to the vapor lifestyle, and it looks damn good doing it, too.