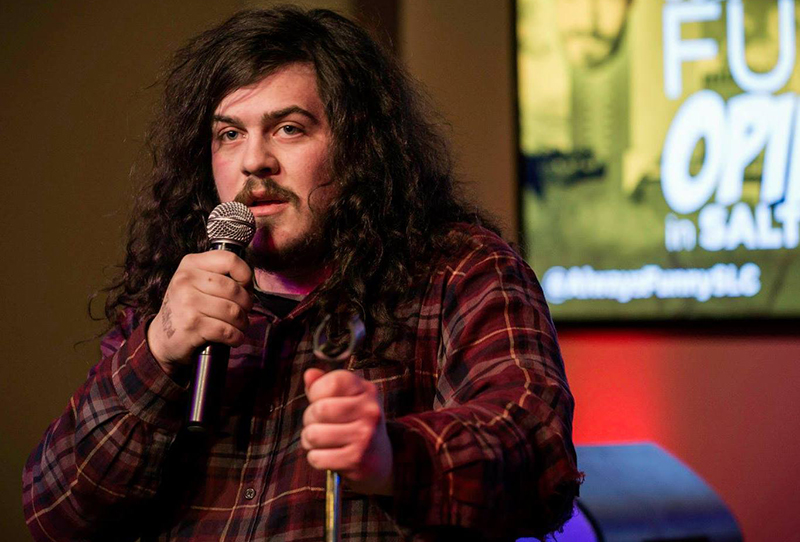 It has been two years since Aaron Orlovitz officially began his stand-up comedy career on Utah stages. Since that moment, thinking people everywhere have questioned what they had done without him for so long. Orlovitz is the thinking man’s comic—he’s smart, he’s articulate, and he is oodles of neurotic fun. Already, this bearded be-wonderment has become a force to reckon with in the Beehive State’s comedy scene. SLUG got to him at a time when his career seems to be skyrocketing, just before he inevitably breaks into the big time and gets too famous to talk to us.

Orlovitz is a Utah transplant, having moved here as a teenager from the East Coast. “It was shitty,” he says, “but Salt Lake is way better than Cincinnati.” He brings a unique perspective to the table, being raised in a two-religion household where his mother was Jewish and his father was Christian. A lot of material is inspired by his life and much of his material is centered around being half Jewish. “There were a lot of weird situations that would arrive as a result of that.” Even now, he finds humor in things that most recovering-Mormon comedy fans wouldn’t understand. “I went to the UK and was hanging out with these chicks, and because I was Jewish, they kept asking me about my circumcision.” The way he puts it, they “badgered him” all night to see it. Not yet a celebrity, Orlovitz already gets in Beiber-esque situations. He rarely goes “blue” with his comedy though, so the junk-talk is purely anecdotal.

Onstage, he gives off a perfectly uncomfortable and neurotic vibe, which he plays up. His voice shakes a little bit as he talks about his insecurities. Many of his jokes are rooted in the strange things he thinks of, has done, or have happened in his past. For instance, his dad used to tell him outrageously funny stories as a kid. “We were driving through the mountains in Tennessee and there are these signs that say “look for falling rock.” And he told me that Falling Rock was this young Native American boy that disappeared a long time ago and that if you found Falling Rock you’d win a prize. I believed that way longer than I should have.” Orlovitz sounds like he already came from funny genes as his adventures with his dad growing up make multiple appearances in his jokes.

Starting the dream young, Orlovitz wrote an essay in the fourth grade about how he wanted to do stand-up comedy when he grew up. As he finally did grow up, he had a lot of encouragement to get onstage. “I always had a lot of friends tell me that I should.” But, he didn’t know how to begin that journey. “When I started comedy I had no idea that there were other comedians or how to become a comedian.” He was lucky enough to have started out opening for his friends’ bands before doing an open mic, which led to him getting more acquainted with the stage. “I don’t know if I’m comfortable, even now,” he says. “I’m a little neurotic, you know. You’re never fully comfortable with that. I feel like if you were, you wouldn’t be funny. I think discomfort is funny. Being uncomfortable is when people do funny things. If everyone had all the comfort they desired, there would probably be no funny people.”

It hasn’t always been an easy ride for Orlovitz, though. “I dropped out of society for like a year, and I was a squatter and an active anarchist,” he says. “It made me grow up quite a bit.” It was this life event that changed and humbled him, creating the kind of young-but-wise comedian that you see onstage. “Basically, I learned that I still hate society and government, but it’s easier just to give in, I guess. I matured a lot, you don’t have to entirely give in. I still express an amount of rebellion with my comedy and in general.” It’s become a big part of why he does comedy.

“I was a philosophy major until I dropped out and started squatting,” he says. Indeed, he is a smart guy who deeply understands philosophy, a theme that weaves in and out of his material. “A lot of philosophers try to define humor. Aristotle talked about it—how humor has to be relatable, how it needs to be ridiculous and all of these different things. Personally, I’m not sure that humor is a thing that even has a philosophy. I think that humor is a way to express philosophy. I think that you can use comedy and humor to make a point about something, about the way the world is, about the way your reality is, about even weird shit like how we know the things we know,” he says. This idea becomes clear when Orlovitz is onstage, blending his life, observational humor, and the deeper meaning behind it all. “I think that comedy and humor could possibly be a form of thought that could get us closer to the truth.”

Orlovitz has made giant strides in the two years since he started. “I feel accomplished with the show Nicholas Smith and I run together,” he says. That show is the monthly comedy spectacle Dungeons & Comedy, where Orlovitz helps host and play Dungeon Master. The show just moved back to its original location at Muse Music in Provo and pits together a handful of comedians who not only put on their sets, but have to battle it out in an irreverent and hilarious game of Dungeons and Dragons. He’s really proud of it. “We have a little bit of a cult following growing,” Orlovitz says. “There are four or five Provo High School kids that come to every single one of our shows.”

Orlovitz has noticed that he’s found a sort of purpose in being part of the comedy scene, and not just in his Dungeons & Comedy shows. “In some ways it’s comforting because it’s a shared experience,” he says. Orlovitz points out that there is a connection between the comedian and the audience when he is onstage. “I like that people are laughing at my problems,” he says. “It makes me feel better about them, and I hope it makes them feel better. It’s a sort of vulnerability; it’s like letting them into me. If people connect with me and they laugh, that’s a really good feeling. They don’t have to feel vulnerable.”

This is the other part of what keeps Orlovitz going, week after week, hitting as many stages as he can. “I really like the sound of a laugh. It’s a very selfish thing. It feels good to me to get a laugh, and that’s why I keep doing it.” He’s surprisingly optimistic for a self-proclaimed Anarchist. “I would like to do it forever.” Although his realist side then kicks in and he admits that it doesn’t have to be a goal of making it his primary source of income. “I’ve made a lot of good friends in comedy. Part of the reason I still go is that open mic is just a room full of my friends.” It is the friendship and the laughter that drives him to keep getting up onstage, “even when I don’t feel like it,” he says.

You can check out Orlovitz this week in Park City at the Egyptian Theater, as part of the Stand-Up Utah! lineup including comedians Eric Ripley, Paul Sheffield, Aaron Woodall, Abi Harrison, and Alex Velluto, with host Christian Pieper. Tickets are between $15-$25, sold online or at the door at the Egyptian Theater. Dungeons & Comedy also returns to Muse Music in Provo Nov. 14, with another all new lineup for only $5. Let Orlovitz help you get your intellectual nerd on, and check out some of the best local entertainment this state has to offer.