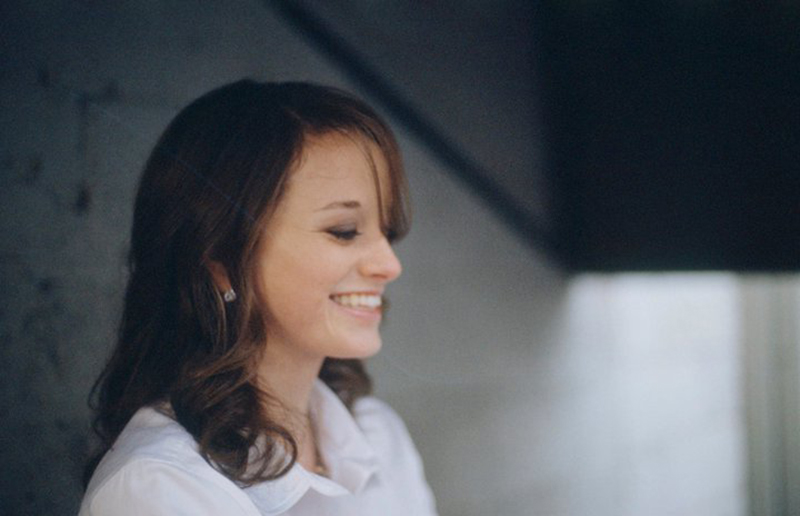 Abi Harrison – From BYU to Bob and Tom

As one of the most memorable acts on Utah comedy stages right now, Abi Harrison is quick, clever, and quirky in her style and delivery. Hailing from Provo, Harrison has worked hard as an entertainer to make a name for herself in our Salty City. SLUG was thrilled to get a chance to sit down with Harrison and chat about her journey, her passion for comedy, and her big break of a lifetime appearing on the Bob and Tom radio show.

It’s been seven years since Harrison made her debut to the stage when she was still a college student at BYU in Provo. “Somebody told me I was funny—a girl. I was at BYU, I was not trying to get girls,” she adds quickly, “and she told me that I was funny and I should do stand-up.” This is how stand-up legends are made, all it really takes is one person to point out that comedy is a valid option, and true comedians jump in. “I just wrote jokes,” she says. “The first time I tried them out was at a BYU talent show, and nobody got them. Then I performed them for my ward and they killed.” When asked about how different the comedy scene at BYU, one of the most conservative religion-based universities in the nation, she laughed. “I only did stand-up three times in the first year, then I got into Humor U.” She got her foot in the door with Humor U, a BYU comedy club that put on performances every six weeks. “There were a lot of things you couldn’t say. They’d veto jokes, and it was very strict and controlled. Once they told me I couldn’t say ‘crap.’”

Talking to Harrison, you wouldn’t immediately guess that one of the funniest ladies in Utah comedy started out at BYU and went on a Mormon mission. “I was LDS and going to BYU and I’m gay, and I told my boyfriend at the time—who became my husband—and we were like ‘well, this is the right thing to do.’ It really solidified my understanding of how gay I was—being married to a man.” As her life has changed, and she has gotten out of Provo, her jokes have changed. It’s just part of her journey and becomes part of her comedy. “I just make jokes about my life and the things I think about and find interesting. I think that really changes for everybody.” When she started to get glimpses of the comedy world outside of the Provo bubble, it was eye-opening. “I think working clean is really good, and being able to work clean and have a stage where I could go,” says Harrison. “I was totally unfamiliar with comedy. I was like, oh, you just write jokes and tell them every six weeks.” Doing clean sets at Humor U was only the start for Harrison. “It was a good experience,” she says. “It was an awakening to see what comedy was outside of BYU norms. I think I’m all cool because I can make BYU kids laugh, but once you see that, it’s like a beautiful thing.”

The awakening moment was seeing other touring comics and what they brought to the table, which prompted Harrison to branch out. “The first time I saw a really good comic, Keith [Stubbs], it blew my mind, and I understood so much more. This is a skill that you’ve gotta build on and work on. It’s like hearing live music versus recorded— there’s an excitement and a togetherness in the room, I feel like. Just being around good comics has inspired me to get better.” And how does she get better? She records her sets and takes a lot of notes right after her set, just like developing any talent and skill. “Telling jokes gets my mind ready for writing,” says Harrison. “The main part of getting better is just doing it, a lot.” Now that she does it every week rather than once every six weeks, she’s seen herself get better faster, but she had a confession: “I hate watching stand-up, but I like it if somebody is good.” So, what does Harrison consider good? She talks about the time she saw Katie Rich, a writer for Saturday Night Live, at Chicago Women’s Funny Festival. “She was so funny and she does improve,” says Harrison. “She was really comfortable and powerful on stage.” Harrison doesn’t traditionally do comedic improv, but it was a learning experience. “It was the first time I really watched improv and that I enjoyed it.”

All of this leads to the opportunity of a lifetime, and how a chance performance led to a spot on the Bob and Tom morning show, which is heard by over 5 million daily listeners across the U.S. She was out of town officiating at her sister’s wedding when she picked up a guest spot at a club show. “I’ve gotten to do some really cool stuff, but the actuality of it is, ‘give me some fucking stage time.’” She was seen by Chick McGee at the show, and asked to make a guest appearance that following Tuesday. More memorable than even the show was what happened before the show. She was pretty stressed about doing the show, and put off all of her preparation. The way she tells it is that when she woke up that morning she didn’t have any clean underwear. Her thought process was to go without. “So I put pants on and I was like ‘cool, why do people even wear underwear?’ And then I coughed and I was like, ‘oh, right, right, right’. So I put a pad on, right on my pants, and walked in to do the Bob and Tom show with my modified diaper.”

Even after having a huge national platform like the Bob and Tom show, Harrison remains humble. She doesn’t see herself as a headlining performer just yet, but that she is still working her way up as a featured performer. Even more humbling is where her passion stems from. “As a kid, we kind of had a rough childhood, my sister took care of us, and that was her role, and I made them laugh. And that was my whole thing—that’s how I identify, I think. Because that was such a big deal to me, to be able to comfort and calm people down and cheer people up.” Harrison is completely sincere when she tells me why she’s a comedian. “It’s one of the things you do when you get addicted to it, it’s powerful, you know, to be able to put a smile on somebody’s face. It’s really other people why I do comedy, it’s a desire in me to connect.” She continues to connect with her audience, her fans, and her comic counterparts, as an integral part of the local comedy scene, always making the people of Utah and abroad laugh.

You can check out more of Abi Harrison’s stuff by following her Twitter @abigailharriso (no N, she points out). If you get a chance to see her live, check out any of her upcoming shows all around the valley, including an upcoming show Sunday Night Special Aug. 2 at Wiseguys Comedy Club in West Valley.