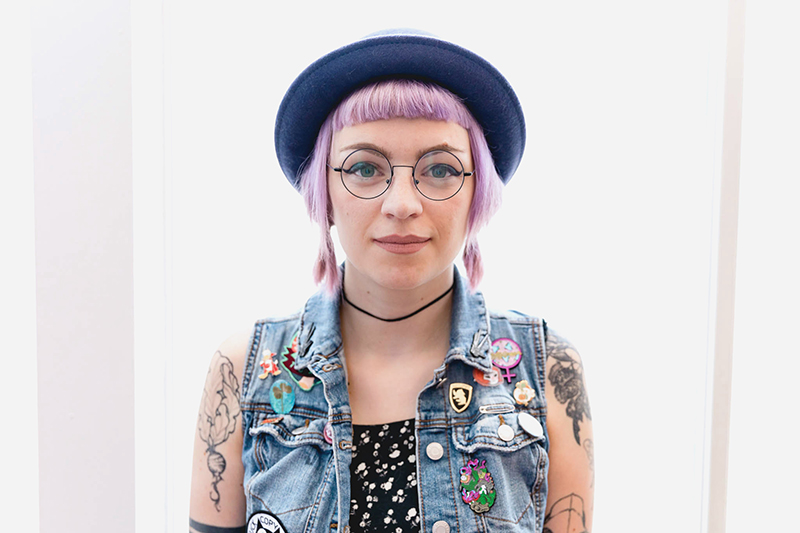 I’d be surprised if you haven’t previously seen this month’s cover artist, Heather Mahler. Her Instagram alone has an impressive count of 76,000-plus followers and growing, complete with a gallery of her drawings. Her work is a combination of her screenprinting BFA from Utah State University, her passionate fandom love of ’90s anime art and her personal experiences. Whether it’s custom portraits, fan art, grumpy-yet-cute animals or feminist punk art, Mahler’s work is guaranteed to put a smile on your face and warm your heart.

Mahler started drawing at a young age, having grown up in a family of artists. “My mom’s an artist and graphic designer,” she says. “My older sister is an acrobat, and my other sister paints. There’s a lot of creative buzz in the family, so I have a lot of support, and we’re all honest with one another about our work.” As an avid anime fan, Mahler’s initial drawings were inspirations of her favorite characters. However, her family believed that Mahler could dive deeper and go beyond fan fiction art. “My mom said something to me when I was 17 that has stuck with me to this day,” says Mahler. “She said, ‘As an artist, your goal should be that if someone looks at your piece, your name should come before a style.’” Taking this advice to heart, Mahler began inventing her own characters and continued her art education.

“I went to college to try and figure out what to do,” says Mahler, “but no one knew what to do with me.” Countless professors attempted to sway Mahler to one of two sides of thinking: traditional work or radical feminist art. Yet, neither of these options settled right with Mahler. “It’s good to get out of your comfort zone,” she says, “and I did make weird stuff. But that didn’t scream ‘me.’ I just wanted to draw girls and lines and animals.” After meeting with and talking to Professor Kathy Puzey, Mahler decided to finish her degree in printmaking. However, it wasn’t until after graduation that Mahler felt like she had the freedom to truly explore who she was as an artist and begin creating her own unique pieces.

Mahler’s style centered around things she loves: animals, plants and ’90s anime. “My favorite shows growing up were Powerpuff Girls and Sailor Moon,” she says. “All those badass chicks. And my favorite things to draw are things that look really awkward and really grumpy.” Mahler’s drawings quickly drew fame online, specifically through the app Vine (RIP). Mahler joined artistic forces with a small community of people who would post their artwork together. “We had a group for a couple of years called We Draw,” she says. “We would make hashtags on the app and would draw together on the Internet—silly things, like birds in suits.” Vine’s life was short-lived, however, and Mahler began to distribute her work more widely across the web. “If you post online and feel comfortable sharing your work, it’s important as an artist to distribute it,” says Mahler. Rather than overthinking her drawings, Mahler now creates what resonates soundly with her. “I learned a long time ago that if I think something is funny and draw it, that’s all that really matters,” she says. “If I draw a fat cat sleeping on someone’s head, it’s because I thought that was hilarious.”

Beyond advocacy work, Heather Mahler is a major nerd—in the coolest of ways. She knows all there is to know about Sailor Moon, Harry Potter, Doctor Who and Star Trek, and it reflects in her work. Heather has been an artist vendor at numerous comic and anime conventions, including our very own Salt Lake Comic Con and Fan Xperience. “My very first con was in Cincinatti,” she says. “If anyone wants to do a con for the first time, I highly recommend sharing an artist booth. The best way to start is by diving into it, and if you have a friend there, it’s cheaper and you have the support.” You can find Mahler’s signature fan art for Rick and Morty, Stranger Things and—my favorite—Star Wars on her Instagram, along with a plethora of other incredible fan pieces. Best of all? If there’s a fandom that you have and you’re dying to have a Mahler spin on some wall art, she also takes custom orders on her Etsy account!

For this month’s SLUG cover, Mahler wanted to add a bit of Utah to her design. “When I sketch, I try to get the concept first,” she says. “When I sketch, it’s pretty messy, but it’s light. I felt like I needed a girl, a cat and some plants. Behind her are mountains, and her tattoos are also Utah-inspired.” Also keep your eyes peeled for Mahler’s artist booth at this year’s Craft Lake City DIY Festival, the second year in which Mahler will display and sell her art. “Last year was good,” she says. “All the volunteers were so nice and helpful. They put me in a great spot. Having anxiety, I think [the festival] wants to help people who struggle with that.” For future artists who want to be a part of the festival, or for those looking for a way to start their art career, Mahler has solid advice: “Drawing is like working out,” she says. “It’s hard, it’s competitive and it doesn’t feel like you’re getting anywhere until you really look back and compare. For people who ask me, ‘How did you get to where you are today?’ I say, like working out, you have to do it every day.”

In the future, Mahler would like to get into comics—a long-term goal she’s had and plans to accomplish. By breaking out of her comfort zone, she hopes to expand her creativity. But beyond this, Mahler’s biggest goal is to create art that makes people feel empowered and included. “As a white person in Utah, I’m always trying to educate myself and listen more to include more diversity in my work,” she says. “I hope that I’m doing that.” To this day, Mahler says that the greatest accomplishment in her life goes to her fans for loving her work. “As I said, I was not popular when I grew up,” she says. “I was absolutely bullied—a total nerd. The fact that so many people give a crap is really cool.”

Genuine, down-to-earth and talented, Mahler is an amazing individual, inside and out. Check out her work on Instagram at @heathermahler88 or on her website, heathermahlerart.weebly.com. Grab prints or commissioned pieces on her Etsy shop at etsy.com/shop/HeatherMahlerArt. And come say hi to her in person at this year’s Craft Lake City DIY Festival 2017, Aug. 11–13 at the Gallivan Center.