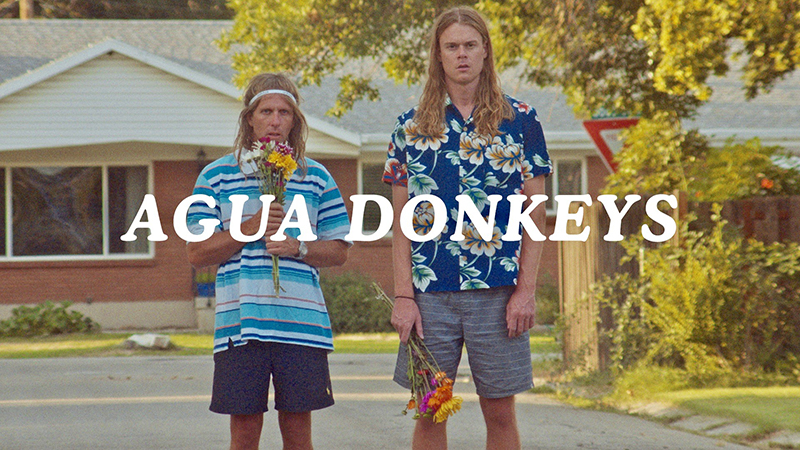 Set in the world of summertime Salt Lake City’s backyard pools, pool boys MP (Cunningham) and Jer (Jackson) work on their tans, ponder the pureness of water, and concoct ways to win over the office girl Jackie’s (Baby Darrington) heart, all while (occasionally) cleaning pools in Cunningham’s latest short film, Agua Donkeys. Following Cunningham’s 2017 Slamdance short, Ford Clitaurus, Agua Donkeys explores the idea of love, true friendship and how to go about performing CPR while staying mindful of one’s sexual preferences. Here, Cunningham checks in about his relationships with the characters he plays, his journey as a filmmaker and the message of love in Agua Donkeys.

Cunningham: Jer and I have always wanted to be pool boys. So it felt natural writing the script. I also think that it’s interesting how someone can have different versions of themselves. Jer and I are one way when we’re together. We’re another way with Jackie and another way in front of Donnie. The same thing goes for the housewives and our boss, Rod. In life, we’re constantly reflecting on our environment, and our environment is reflecting us. Jer and I wanted to write a script about the idea of love. MP and Jer love Jackie, but when they find out she loves Donnie, it makes sense to MP and Jer because they want to be like Donnie. And at the end of the day, MP and Jer will always have each other. It’s a multilayered love story.

SLUG: Agua Donkeys seems to have more of a linear storyline than Ford Clitaurus. What made you go on a different narrative route this time?

Cunningham: I had a different perspective on things when I wrote Ford Clitaurus. Ford Clitaurus is more of a metaphor. Agua Donkeys is a different kind of equation. Jer and I wanted to tell a romantic story that happens to also be a comedy.

SLUG: Do you feel as though you’ve changed at all as a filmmaker between Ford Clitaurus and Agua Donkeys?

Cunningham: Yes, I do feel that way. I was reading different books when I wrote Ford Clitaurus, so I was thinking about different things. When Jer and I wrote Agua Donkeys, I was living on a farm and reading books about Egyptian postures and qigong.

Cunningham: Jer and I liked the idea of a swimming donkey and we wanted to see it on a shirt.

SLUG: MP and Jer seem to get into a lot of different, weird shenanigans (aka checking out cars, getting an even tan, and highlighting Jer’s hair with lemon juice) when they are supposed to be working. Are any of these moments inspired by real-life situations?

Cunningham: MP and Jer are living in the moment. They’re just trying to have a laid back situation as much as they can. MP and Jer have a “win-win” type of relationship with their customers so they get the job done, but they also hang as hard as they can while doing it.

SLUG: In the opening scene, MP and Jer get a little existential (as much as two dudes can get) and talk about the pureness of water. Was this scene improvised at all? What do you want viewers to get out of this scene?

Cunningham: The dialogue was written. Pool boys talking about the depths of water is funny to me. The idea of pure water is a wild thing to think about, too. Water back in the day would’ve been like Gatorade.

SLUG: The characters Donnie and Jackie are kind of mysterious entities for MP and Jer. What inspired these characters, and why do MP and Jer admire Donnie so much?

Cunningham: It’s the girl you wish liked you and the guy you aspire to be. They are different ends of the spectrum but that makes them the same thing, in a sense.

Cunningham: The Agua Donkeys MP is a version of the real-life MP. When I write a character, I have to give the character a perspective, so I imagined a version of myself with a certain perspective. The MP in Ford Clitaurus was a little less subtle and a year younger.

SLUG: Do you have anything else in the works as far as filmmaking goes?

Cunningham: Jer and I are in development with Warner Brothers right now on a series we wrote about an almond farmer and the end of the world—with aliens, the deep state and true love sprinkled in.

SLUG: What do you hope people will take away from Agua Donkeys?

Cunningham: I hope people will want to stretch more and follow their heart.

Agua Donkeys is free to view on vimeo.com along with Cunningham’s other short films.